As the Nov. 6 general election approaches, members of central Wisconsin’s Hmong community are becoming increasingly vocal about the issue of immigration and the risk some face of deportation to their ancestral homeland of Laos.

Hmong refugees first came to Wausau in the late 1970s, fleeing the communist takeover of their native Laos. Most could not read or speak English. Many fought on the American side in the Vietnam War. By 2018, they had grown to be the region’s largest non-white ethnic group.

In celebration of their culture, more than 8,000 people attended the second annual Hmong Wausau Festival in late July, which featured an impassioned speech from Mary Thao, who was elected to serve on both the Wausau City Council and the Wausau School Board.

Thao addressed the crowd in Hmong, and then in English, arguing that all too often minorities are treated as tokens by the region's movers and shakers. 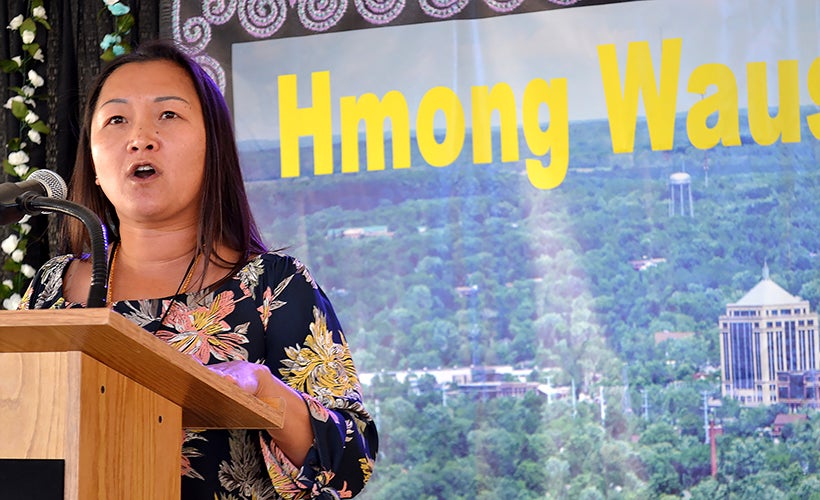 Mary Thao, a member of Wausau's City Council and School Board. Glen Moberg/WPR

"We believe that if we place one person of color in our system that we can automatically claim being a diverse entity. I'm asking all of you for more," Thao said. "I have yet to see a city, county, school district and our largest employers here in central Wisconsin employ people of color, women or emergent leaders in leadership roles creating shareholder value or working on corporate strategy."

After the speech, Thao told WPR that the way to power lies in part through the ballot box.

"Registering voters and getting people to the polls. It's been a huge, huge milestone for us here as a Hmong community," Thao said.

She said when she votes, there is one overriding concern.

"Southeast Asian deportation and immigration," Thao said. "That's very important to refugees like myself and those that are older than me and younger than me."

"Especially in this particular time, I have friends and family that are not U.S. citizens and I often worry about their safety and how our government is going to protect (them)," Lue Yang said.

Kevin Lo, an attorney with Asian Americans Advancing Justice’s Asian Law Caucus, said about 4,600 Laotian immigrants have been issued deportation orders, but only a handful have been deported. Many of them have old criminal convictions, but are now working and supporting families.

They are in what Lo called a "legal limbo," unable to become United States citizens, but unable to be deported because the Laos government is not cooperating with U.S. authorities.

Lo said these immigrants and their friends and relatives are worried about stepped-up enforcement by the Trump administration.

"Most of these people, the crimes they committed were decades ago ... They have families and they've started new lives," Lo told WPR. "ICE needs to take that into account and see that they’ve changed their ways. If they can’t deport them, it doesn't make sense for them to hold them indefinitely or pick them up."

"Especially in this particular time, I have friends and family that are not U.S. citizens, and I often worry about their safety and how our government is going to protect (them)," Yang said.

It’s a concern shared by Chee Lor, a University of Minnesota student from the La Crosse area.

"Whoever's in charge that's calling the shots, I think they fail to understand that everyone who's here was once an immigrant or came from an immigrant," Lor said.

He argued that the government needs to open its arms to refugees, and then help them assimilate into society.

"When my family was in poverty, the government didn't throw us out on the streets. Having housing opportunities, being able to go to the hospital for preventative screenings, and having some sort of income to help put food on the table," Lor said.

"When my family was in poverty, the government didn't throw us out on the streets. Having housing opportunities, being able to go to the hospital for preventative screenings, and having some sort of income to help put food on the table," Chee Lor said.

"Student aid goes a long way in providing education for many students," Vang said. "It’s been a great help for me."

Of the government services that help Hmong refugees adapt to life in America, public education was number one on the list for many of the people WPR talked to at the Hmong Wausau Festival, including Sasor Lee, a Marathon County corrections officer from Weston.

"Do anything that you can do to support kids to go to school and get a higher education and make their dream come true," Lee said.

Moua Xiong, a young farmer from the Village of Kronenwetter, said public schools are particularly important for the children of the refugees who are trying to learn a new culture.

"From the Hmong community, we live in a very closeted life, and we don't see much of the world besides through our parents ... public schools really open the kids' eyes to the opportunities America can provide for them," Xiong said.

Others worried that as the Hmong community assimilates, their old culture is fading away. 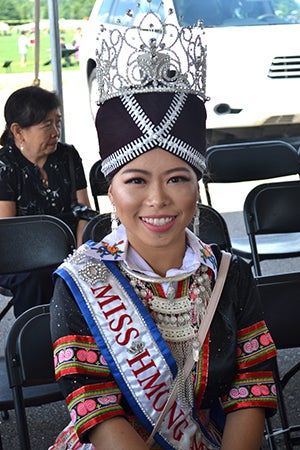 Nancy Xiong of Appleton wore a crown and a traditional Hmong dress, and a banner labeled "Miss Hmong Midwest First Runner Up."

"Something that’s very important is that our younger youth are not learning the Hmong traditional language and our rules," Xiong said.

For most of the attendees at the Hmong Wausau Festival who talked to WPR, immigration was their top political issue. Others chose public education, the key to helping refugee families achieve power as U.S. citizens.

Council woman Thao said we should be listening to them.

"Embrace the differences. Embrace young emerging leaders like us that are challenging the status quo," she said.