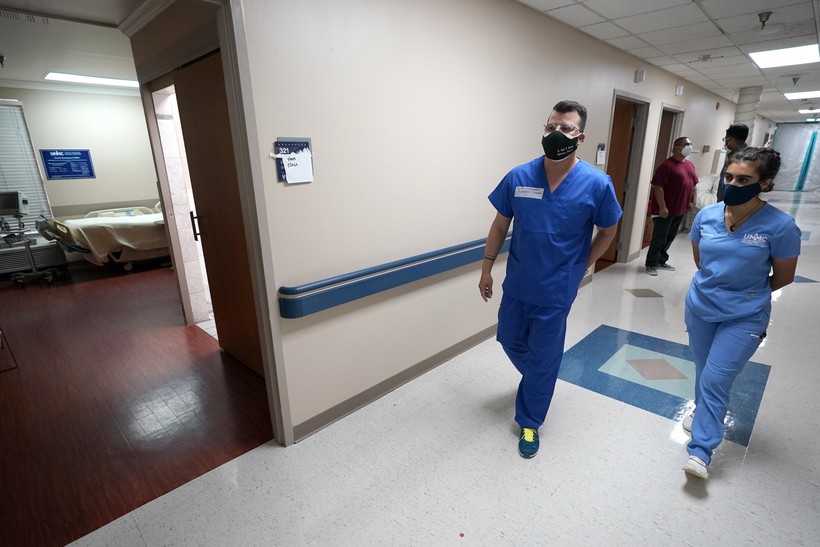 Medical staffers walk down the hall at United Memorial Medical Center in Houston, Thursday, July 16, 2020, in Houston. Advocates for changes to the U.S. work visa system say immigrant physicians and nurses should be able to relocate to COVID-19 hotspots. David J. Phillip/AP Photo

Immigrant Doctors Fight To Contribute To US COVID-19 Response

In April, when East Coast hospitals were being overwhelmed by COVID-19 patients, health care workers from all over the country took temporary assignments in New York City and elsewhere to help respond to the pandemic. As the nation's highest infection rates moved to states like Texas and Arizona, hospitals there needed extra help from outside physicians, too. The same need could come to Wisconsin.

But for hundreds of thousands of doctors practicing in the U.S., pitching in like that isn't possible.

"I cannot even move next door," said Dr. Sonal Chandratre, a pediatric endocrinologist in Stevens Point. "Even if I'm qualified, even if I'm volunteering — it doesn't matter what we are willing to do. We are not able to do it."

That's because Chandratre, like more than 200,000 other doctors practicing in the U.S., is an immigrant who got her medical degree abroad. The inability to move is just one of the many obstacles in the way of immigrant doctors in the U.S. The pandemic has made some of these challenges worse, and it has given a new context and urgency to others.

Now Chandratre, coauthor with her husband of a new paper for the Wisconsin Medical Journal entitled "COVID-19 Poses Challenges to Immigrant Physicians in the United States," is speaking out about the risks U.S. rules pose to her own family, to the lives of other foreign-born physicians here and ultimately to American patients as well.

Chandratre, who was born in India, left that country when she was 22. She practiced medicine in the United Kingdom for several years, and completed her U.S. residency in New York. They initiated their move to Wisconsin when her husband, internal medicine specialist Dr. Aamod Soman, found a job in Stevens Point. She's now been practicing medicine here for close to a decade.

Today both of them are doctors at Ascension St. Michael's Hospital, and Chandratre teaches at the Medical College of Wisconsin-Central Wisconsin campus. Their two daughters, ages 9 and 14 months, are U.S. citizens.

But Chandratre and Soman are not. And despite their status as well-paid professionals, the fact that they are in the U.S. on temporary work visas makes their lives here precarious. Before the pandemic, they worried about the fact that, if they were to visit family abroad, they could be barred reentry into the U.S. 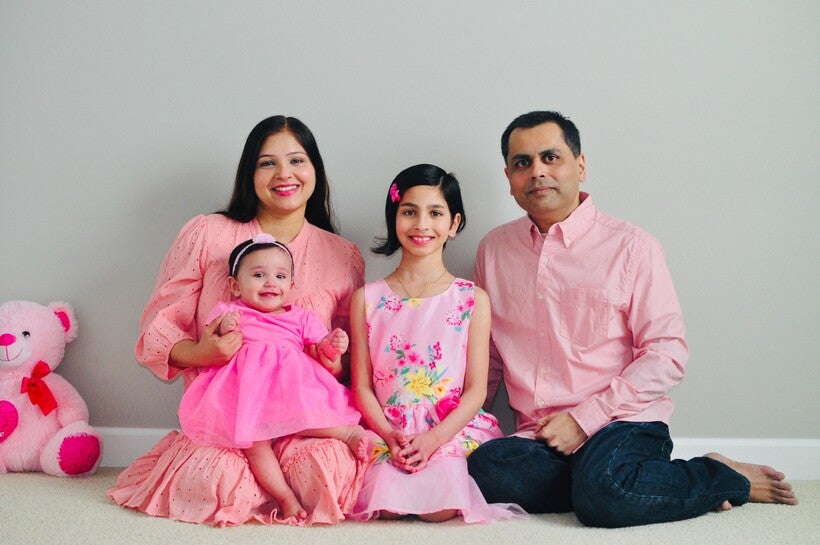 Dr. Sonal Chandratre and her husband, Dr. Aamod Soman, pose with their two daughters, Serene, 9, and Selene, now 14 months. The couple, both physicians in Stevens Point, have been on work visas for nearly a decade, which limits their ability to practice medicine and makes their lives here precarious. Courtesy of Sonal Chandratre

COVID-19 has made the risks of practicing medicine without citizenship or permanent-resident status seem much more present, much more real.

"My husband is a frontline worker," Chandratre said. "He takes care of patients in the intensive care unit who have COVID-19. What if he dies? Instead of mourning, in the first 24 hours I would be frantically searching for options to pack my bags and take my kids to a country where I would be considered a legal citizen."

Their family's status is predicated on his work visa. Chandratre, though she is working legally as a physician herself, would be subject to deportation overnight if her husband died.

The term for doctors like Chandratre is "international medical graduates," sometimes shortened to IMGs. They are subject to strict hiring regulations in the U.S. For example, health systems must advertise open positions for months with no American applicants before they can potentially hire a physician who was born and trained abroad. The same regulations tie these physicians to practicing at a given address, preventing them from moving even within their own health systems, let alone relocating to COVID-19 hot spots.

There are not enough doctors in many parts of the country, especially in rural and low-income areas, and it's a problem that even before the pandemic was projected to get worse. In Wisconsin, about 19 percent of all doctors are IMGs, and the proportion is considerably larger in some specialties and in some places. More than 60 percent of physicians in Cudahy are IMGs. In her paper, Chandratre wrote that nationally, the group makes up one-third of all physicians practicing in areas with the highest poverty rates.

COVID-19 has complicated the process of applying for and renewing their visas, because many services were shut down for months. But even more than that, it's brought into relief the effects of some of these shortages.

A bipartisan bill in the U.S. Senate, the Health Care Workforce Resilience Act, would address some of the challenges, making it easier for immigrant nurses and doctors to work in the U.S.

"These immigrants are playing a critical role in the battle against the pandemic," U.S. Sen. Dick Durbin, D-Illinois, said in a speech in Congress in May. "And yet our broken immigration system does not allow many of them to fulfill their dreams to becoming part of America's future."

Among other things, the bill would expand the number of usable visas, eliminate "country caps" or limits on how many can come from a given nation, and expedite visa processing.

Chandratre says the bill should be part of the package of COVID-19 relief legislation that is being debated in Congress. It's discouraging, she said, that so far that seems unlikely to happen.

"If at this point in the pandemic situation, if we are not able to really open our eyes and look at what our needs are in health care — there's nothing that can happen after this," Chandratre said.

'Saving Lives Should Not Become Illegal'

Chandratre said her expected wait for a green card is 51 years. She is 41 years old.

She's made Stevens Point her home, and she feels comfortable there. Her older daughter even loves Wisconsin winters. When they discussed what it would be like to live in Texas, her daughter said if there wasn't snow there, she wasn’t interested.

But the limits on her employment, and the risks of her husband's work directly with COVID-19 patients, sometimes serve to remind her that regardless of their contributions, as far as the U.S. government is concerned, she doesn't belong.

"I don't want to die in a place where I'll be called an alien when I have spent my entire life here," she said.

In the Wisconsin Medical Journal paper, Chandratre and Soman put a fine point on the way limits on immigrant physicians affect not just the doctors themselves but also American patients.

"IMGs are pleading desperately with American policymakers to decrease visa restrictions to bolster their ability to contribute during the COVID-19 pandemic," they wrote. "Saving lives should not become illegal."