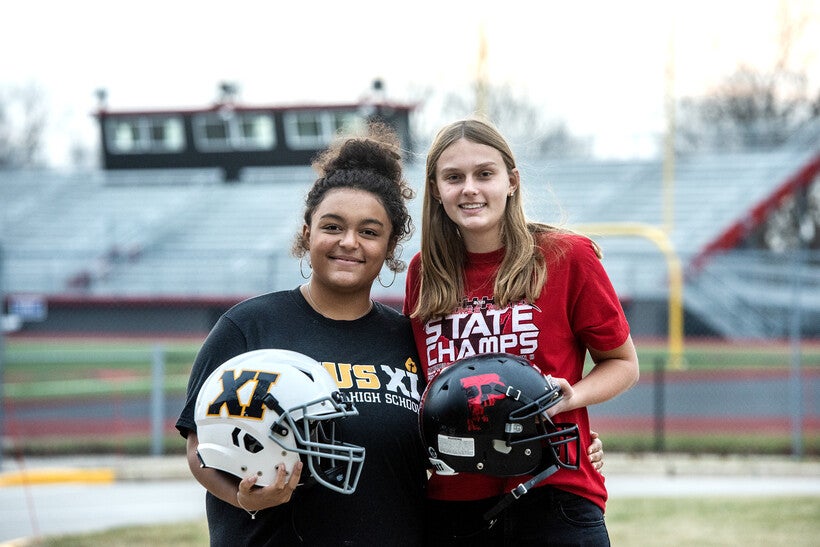 'I look up to you': Pioneer female quarterback in Wisconsin inspires after touchdown pass

Yet somehow, with a fraction of a second to get rid of the ball, she snuck a pass to senior running back Matthew Ciesielczyk, who found his way to the end zone.

"It didn’t hit me fully that we just did that. I got my first touchdown pass. It was so surreal," Matz, 17, later said. "I didn’t even feel like I was on the field. It was such a good feeling." 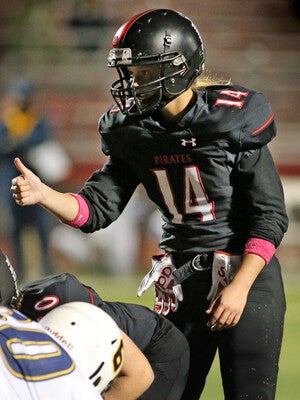 After the game, Matz stayed to visit with family and friends. Without the support of those people, her teammates and coaches, Matz says she wouldn’t be the person she is today.

But it’s also hard for them to understand what that person has been through. Being a pioneer means some degree of isolation. She was the only girl on Pewaukee’s football team. She was alone while reading comments on social media that the team should only be for boys.

More girls are playing high school football than they used to, but it is more common for them to play on special teams. It is harder to find girls playing quarterback like Matz, whose touchdown pass Oct. 7 against Pius XI Catholic High School gained local and national attention.

Matz had only once played against another girl in the eighth grade. Against Pius XI, however, someone else that night understood what she had been through.

As Matz stayed on the field after the game, Pius XI sophomore Hannah Peters approached her. 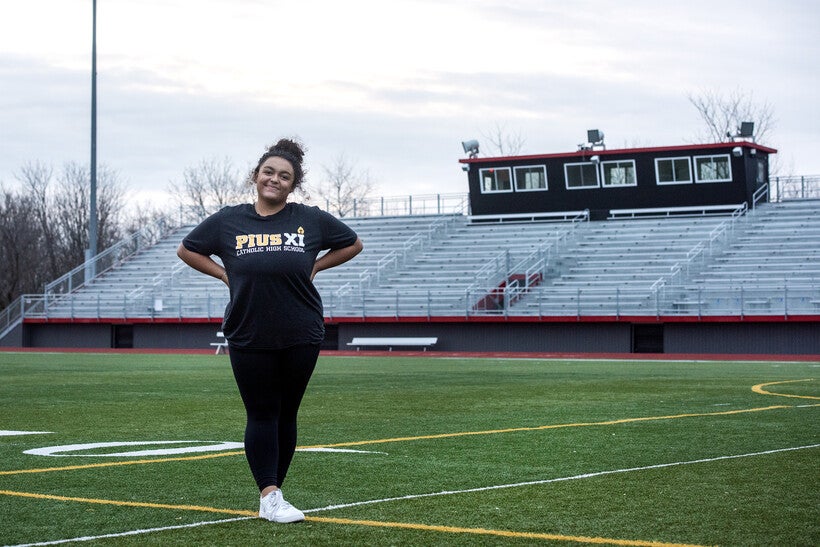 Hannah Peters, a sophomore who plays on the offensive and defensive lines at Pius XI Catholic High School, stands on the field Friday, Dec. 2, 2022, at Pewaukee High School. Angela Major/WPR

"It would be really cool to show other girls all around the world that girls can also play football," she remembered thinking.

Peters now plays on the offensive and defensive lines for Pius XI. She initially thought playing football would be weird. She had her doubts, thinking about the people who make awful comments about women playing male-dominated sports. People have anonymously texted her disparaging comments, saying football would be too much for her, that she would be too weak, that the boys would be better than her, she said.

"It has definitely been a challenge," she said. "It has been hard some days."

Peters quickly learned that her teammates accepted her, however. She said support from teammates and family made playing football such a positive experience that the negativity from others became meaningless, worthless, powerless.

"It has definitely been hard, but I wouldn’t change it for the world," she said. "This has been such a good experience for me."

She also found another source of inspiration and strength in Matz. 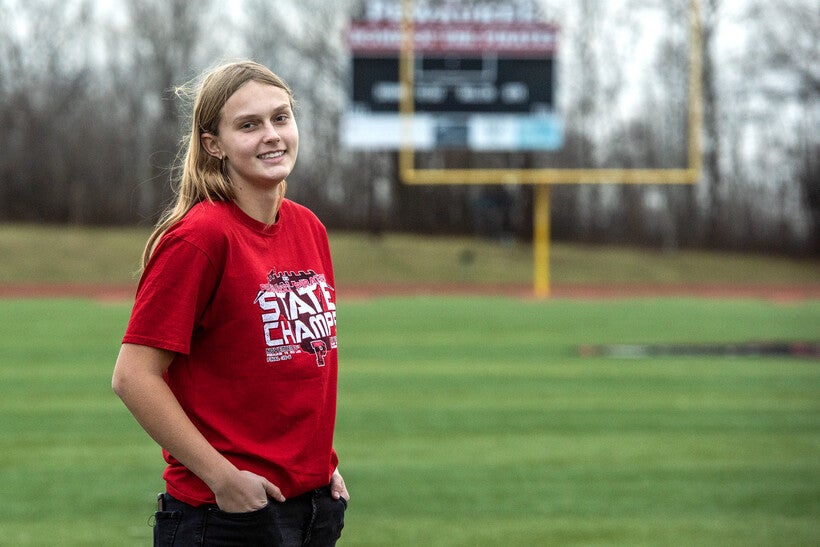 Matz started playing organized football in the eighth grade. During a recent appearance on Wisconsin Public Radio’s "Central Time," she said she would always play with the boys at recess.

"My parents always told me I kind of had an arm," she said.

Matz recalled feeling a little scared when she joined the football team her freshman year at Pewaukee High School. She thought about how others would react. She saw hateful comments on social media.

Matz said she thought the boys on the team were unsure about her, that they would have questions. Why is she here? What is she looking to do? Matz said she felt like she started from behind, not having as much experience.

"Freshman year me was a little scared," she said.

Reflecting as a senior, however, Matz said she shared a ton of love for her teammates. They treated her kindly. They made her better in practice. Above all, they respected her, she said.

"I got taken down a couple times during the game. They’re right there to pick me back up, ask me if I’m doing OK. They’re always there looking out for me," she said. "I couldn’t ask for another set of boys." 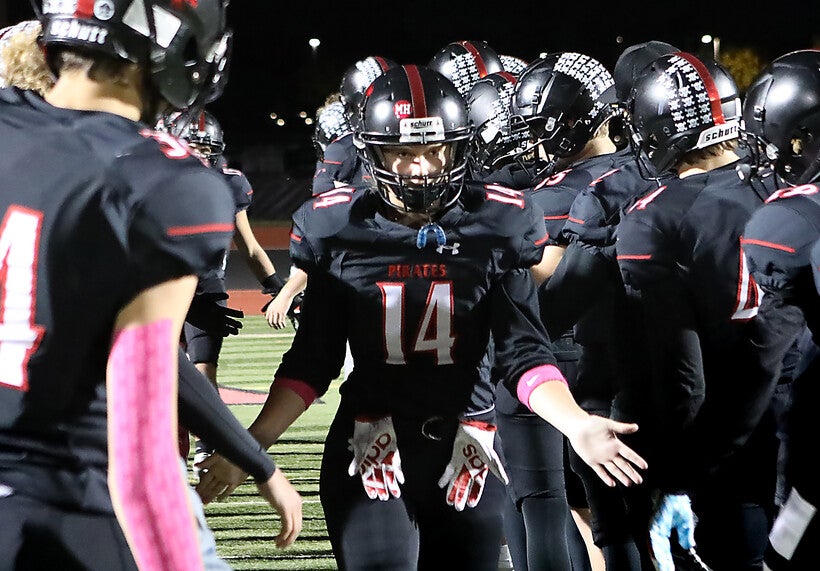 Pewaukee High School senior quarterback Ava Matz walks near her teammates at her Homecoming game during the 2022 football season. Photo courtesy of the Pewaukee School District

'Bigger than just me'

Walking onto the Pewaukee football field after the Homecoming game, Peters could hardly believe her eyes. Just seeing Matz that night made Peters tear up.

"I sat and thought to myself for a second: Women in football was such a different idea years ago — how far it has come now to the point where there are a bunch of women I see all over the internet who play football. That is such a good thing to know how far that has come," Peters said. "I couldn’t describe the feeling."

"I look up to you," Peters recalled saying. "You’re such an inspiration for me."

Coaches and friends had previously told Matz she would inspire other girls to follow their dreams. Then in this moment, it became tangible. Peters stood right in front of her.

In her first year playing football, Matz saw what was possible when she played against another girl. Then, as a senior she became the role model for someone else.

"I know, now, my message was bigger than just me," Matz said. "It was a full circle moment."

Matz said there are lessons for boys to learn from all this, too. It’s about teaching boys to accept and embrace a girl playing on the football team. Matz remembered once noticing a young boy excitedly tell his father, "Dad! Dad! That’s Ava Matz. She’s on the football team."

Matz is applying to attend the University of Wisconsin-Madison next year and hopes to join the Badgers women’s rowing team. She said she prefers team sports because of the support everyone gives each other.

"My big dream was to play football, and I stuck with it," she said. "I couldn't be more happy with the decision I made. You have dreams because it's something you want to pursue and it's something you're interested in. You have to take risks, and you're going to make mistakes. But in the end, that just makes you a better person, a better player, better athlete.

"And it’s so amazing to see other girls out there," she continued. "To see that we can inspire others … it makes it all the more worth it." 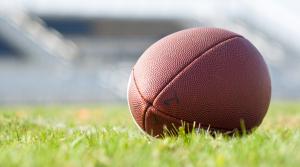