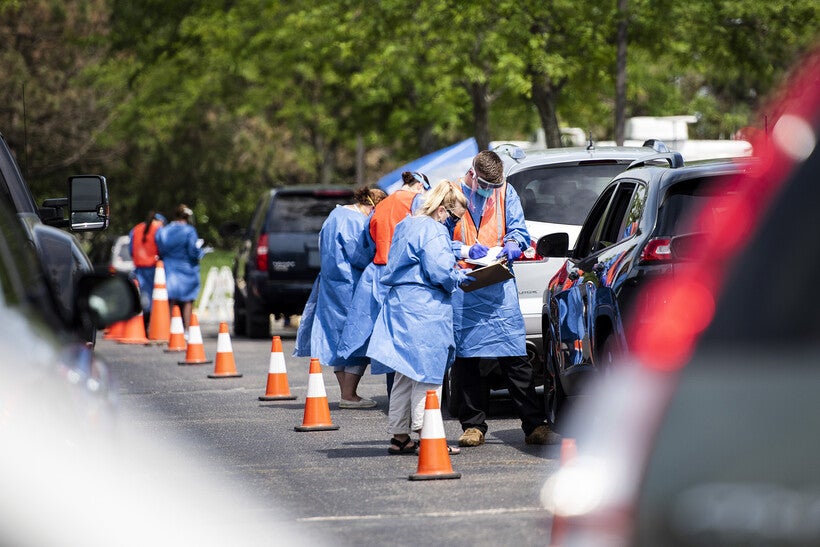 'I Feel Like My Head Is In A Vise': Health Officials Describe Competing Concerns In Pandemic Response

As cases of COVID-19 climb in Wisconsin — particularly in college towns like Madison, Platteville and Eau Claire — local health officials are expressing concern about community spread and a lack of a coordinated approach around the state on how to best combat the virus.

Public health officials speaking at a virtual Wisconsin Health News forum on Thursday discussed how communities took diverging approaches to managing the pandemic after the state Supreme Court struck down Gov. Tony Evers stay-at-home order in May. Initial efforts across the state to flatten the curve worked to some extent during the early summer, but Winnebago County health officer Doug Gieryn described the patchwork of approaches as "almost chaos."

Currently, new positive cases of COVID-19 are soaring, with the state averaging a record high 1,003 new cases per day over the past week.

Public health officials in Madison, one of communities that has seen a dramatic rise in case numbers, believe as many as 65 percent of recent cases are linked to University of Wisconsin-Madison. That campus is now temporarily suspending in-person learning for two weeks and having students in two dorms quarantine.

In Winnebago County, home to UW-Oshkosh, Gieryn is now concerned about having enough contact tracers to follow up with infected people in the Fox Valley area. In late June the Centers for Disease Control and Prevention came in to investigate outbreaks among young adults.

"The curve of these cases is getting steeper," he said.

In Wood County, there’s been resistance to contact tracers. County Health Officer Sue Kunferman said a lot of people testing positive for COVID-19 are cooperating by providing information on where they’ve been and who they’ve seen. But increasingly, people are refusing to answer the phone.

"And we’re seeing more people 'playing the system' as well, not giving us contacts because they don’t want friends and family to be quarantined for 14 days. They need to continue to work, so they’re not sharing information," Kunferman said.

Many of the health directors on the panel also described difficulty in finding a common ground between economic interests and community health.

"I kind of feel like I have my head in a vise. Since March, you’ve got one side saying, 'Do something, do (health) orders.' And then you’ve got the other side pushing, 'Don’t you dare do orders, it’s not appropriate,'" said Kunderman, as she explained why she supported uniform COVID-19 standards across the state.

Recently, some backlash has been directed toward a statewide mask order, which expires Sept. 28.

Compliance with the mandate has varied across the state. Shortly after the governor announced the mandate, Florence County Sheriff Dan Miller posted a message on Facebook telling residents they could wear a mask "if you want, if you don’t want to, that is fine also. The Sheriff’s Office is not the mask police. We will be out looking for real criminals."

The pressure of trying to contain a public health crisis along with backlash has prompted health officials across the U.S. to quit their jobs. Recently, Milwaukee Health Commissioner Jeannette Kowalik announced she is leaving to take a job with a health policy think tank.