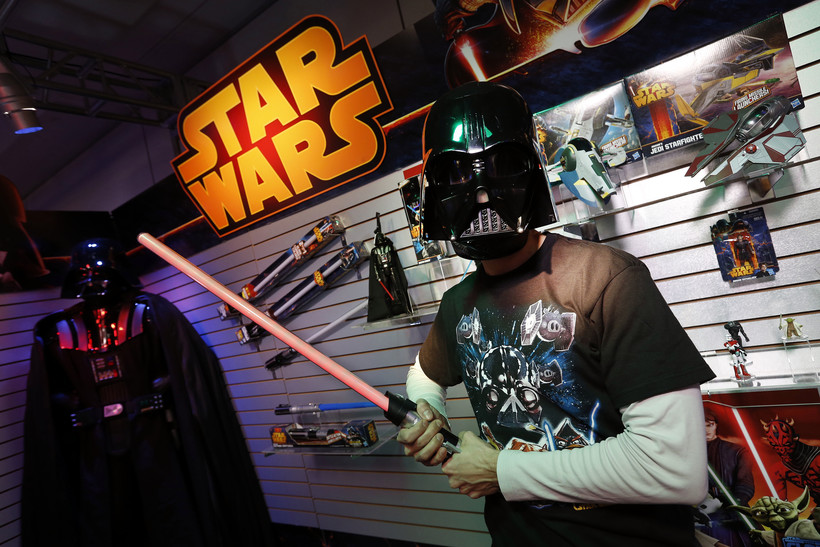 Toy demonstrator Jeff Wolf gets in touch with his Dark Side in Hasbro’s showroom at the American International Toy Fair, Saturday, Feb. 9, 2013, in New York. Jason DeCrow/Invision for Hasbro/AP Images

'I Feel Like An Actual Jedi': Wisconsin Student Builds His Own Lightsaber, Wins National Award

Ever since Kaebren Walker was a kid, he had dreams about owning his own lightsaber, a luminescent laser weapon popularized by the "Star Wars" saga.

So about a year and a half ago, while he was watching "Star Wars: The Return of the Jedi," he decided to make one.

Now, he's winning competitions with it.

The incoming senior at Madison Country Day School showed off his creation at the NAACP's Afro-Academic, Cultural, Technological and Scientific Olympics — or ACT-SO — student competition, where he received a gold medal.

"It doesn't make that infamous whooshing sound, but it does make a cool flame sound that sounds kind of like a flame thrower," Walker said.

The 43rd annual competition saw about 500 students compete in categories such as STEM and humanities. Winners were announced via live stream during the annual NAACP convention in July.

"It was surreal because I never thought that I would be among these amazing other competitors who genuinely had amazing projects," Walker said about participating in the competition. "They were working with VR, cameras ... sensory technology, and here I am. I mean, I made a lightsaber."

Walker said building a lightsaber seemed like a simple task to him, but others didn't see it that way.

"It came off really complex to other people, and I feel that that kind of gave me a little confidence boost because I'm like, 'Man, I feel like an actual Jedi,'" he said.

It took him 18 months to make the lightsaber.

Walker was able to participate in the national competition because of wins at the local level. Locally, he won gold in the categories of STEM for engineering and in visual arts for drawing. Nationally, he was joined by three other Madison-area students. Walker received the only gold out of the four from Dane County, The Cap Times reported.

Before coming up with the plans to make a real lightsaber, Walker did some research. He learned three other people, using three different approaches, successfully made lightsabers. He followed some of their guidance that he gleaned through YouTube videos.

The approach he followed combined acetone and methanol. The fuel gets ignited and then evaporates in the 3-foot span that essentially becomes the blade.

When it's "on," Walker said it looks like a thin flamethrower.

Walker made the lightsaber because he "thought it would be fun." He didn't originally plan on entering a competition but said the opportunity presented itself, and he thought, "Why not?"

Whether he's going to turn what he calls a "side thing" into a career is still up for debate. He is planning to go into art and design but could fathom double majoring in engineering.

"If I really want to continue with this, then it's definitely something that I can do," he said. "I am definitely looking forward to making more projects." 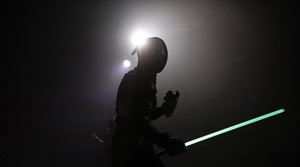 A Madison teenager recently won a national engineering award for designing and building a lightsaber. We talk to the student about his affinity for Star Wars, how his lightsaber works and what he learned from the experience.