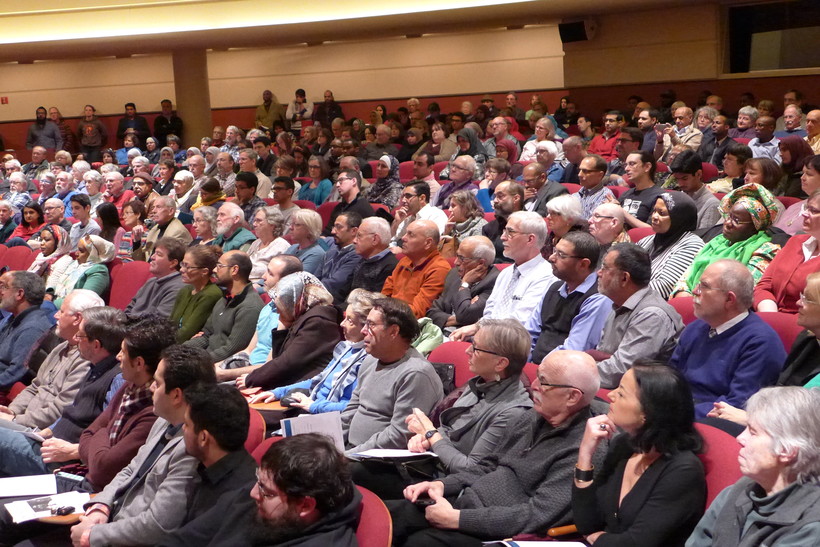 More than 500 people came to the event called "Islam, Muslims and the West: ISIL - Our Common Enemy," on Saturday afternoon in Madison.

More than 500 people gathered in Madison on Saturday for a public forum to discuss Muslims, Islam and the Islamic State group.

Representatives from the local Muslim community, Wisconsin politicians and law enforcement all spoke on the need for peaceful dialogue and cultural understanding in Madison and beyond.

The event, called "Islam, Muslims and the West: ISIL - Our Common Enemy," drew a diverse crowd of people. Muslims and non-Muslims of all ages packed into the lecture hall at Monona Terrace in the city's downtown.

The discussion was sponsored by the Madinah Community Center, one of Dane County's three mosques. It focused on two things: educating the community about Islam and uniting around the common enemy of extremist groups like the Islamic State group, also known as ISIS or ISIL.

Masood Akhtar, an advisor to the Muslim community in Madison who helped organize the event, said finding common ground between Muslims and non-Muslims was one of the panel’s main goals.

"In America, we should not create an environment of fear," Akhtar said. "We should all be saying we are all here together, let's figure it out what really needs to be done, and continue towards that."

He said it’s important to understand the difference between Islam the religion and Muslims, the people who follow it.

"We are doctors, nurses, engineers, professors, scientists, entrepreneurs, industrialists and most importantly, our youth from all around the globe," said Akhtar. "So literally, we are your good neighbors, we are your good friends and we are your coworkers."

So many people were eager to participate in the discussion on Saturday that a 100-person overflow room was opened up. And even then, not everyone made it in. Akhtar said he wasn't expecting such a huge amount of support.

"I was overwhelmed when I found out," he said.

Political leaders like Madison Mayor Paul Soglin and U.S. Rep. Mark Pocan, D-Madison, spoke out against anti-Muslim rhetoric from media, politicians and presidential candidates alike. The speakers singled out Republican presidential contender Donald Trump, who has said he wants to prevent Muslims from entering the country.

Former U.S. Sen. Russ Feingold, who's running for his old Senate seat this fall, said he thinks this kind of speech is unproductive.

"It's insulting and out of touch and it distracts from our common goal. Our common goal is discrediting and eliminating ISIS, al Qaeda and off-shoot groups like Al Shebab. We all share that," Feingold said.

Dane County District Attorney Ismael Ozanne said he's concerned that the media's depiction of the Muslim community creates hurtful stereotypes. But, he said community dialogues are a step in the right direction.

"Although I am very troubled with what I see in the media and what we are dealing with at a national level, I am happy to be here, because this is the conversation that starts us moving forward," said Ozanne.

Law enforcement officials spoke out against discrimination based on religion. U.S. Attorney John Vaudreuil said one of his goals is to prosecute hate crimes, including those against Muslim Americans.

"I talk about hate crimes that are committed by cowards," said Vandreuil. "It takes a coward to deface a mosque or to spray a synagogue when nobody is there. It takes a coward to attack somebody for their race, their religion, or their country of origin."

Local imam Sheikh Alhagie Jallow said he hopes non-Muslims who attended the event will continue to engage with the Islamic community.

"By knowing us, they will know who we are and we can start building the trust, so that's the reason why we started this, and it's just the beginning and we are looking forward to doing more programs that will bring us together," Jallow said.

The organizers of the event said they hope to host similar events in the future.