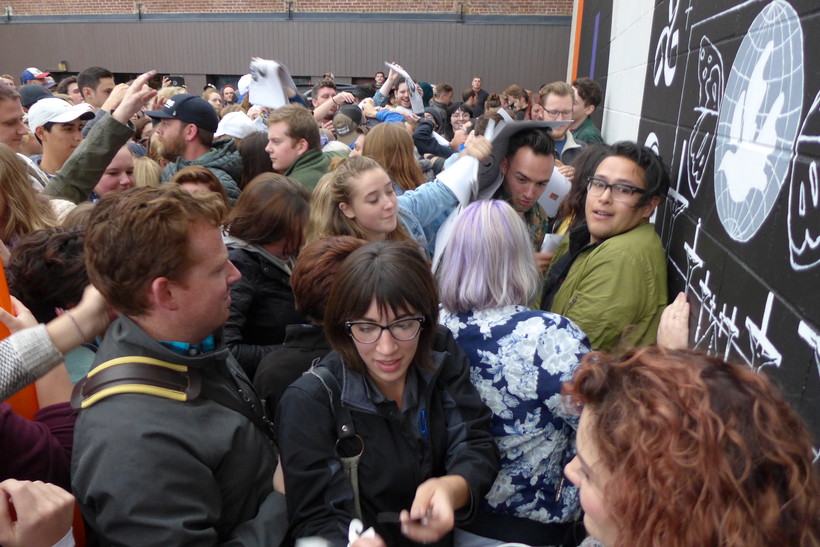 Bon Iver fans scramble to get their hands on artwork and stickers.

Around 200 fans of indie rock band Bon Iver converged on a street corner Wednesday night in Eau Claire for a preview of the latest album from Grammy-winning Wisconsin artist Justin Vernon. The crowd stood next to a 30-foot mural of the cover art for Vernon's latest album, "22, A Million." They were summoned by a cryptic social media message naming a place and time.

At 6:30 p.m., a newspaper stand was stocked with art on broadsheet paper related to the album while a cassette player faintly played its opening track. When the music started the crowd went silent for a moment. That peace was quickly dashed as the throng of fans rushed to the rack, grabbing for copies of the papers.

Maggie Stich drove from Milwaukee, fought the crowd and came away with her own copy. She was hoping for a concert but said the four-hour drive was still worth it.

"That was crazy, got elbowed in the chin. Can you imagine what's going to happen at a concert?" said Stich as she paged through the eclectic artwork and symbols.

Maddie Banish of Eau Claire was also hoping for a performance or even a glimpse of Vernon, the Eau Claire-native-turned-international-music-star. She, too, held a copy of the paper tightly and recounted how she and other Chippewa Valley natives feel a pride about Vernon and Bon Iver not matched by other bands.

"The fact that he's become so big in music and just in things today, that he still has pride in his roots and he's still working on this town to make it even better than we already think it is," Banish said.

Wednesday night's event was the first of several planned around the world. More are scheduled in cities like London, Amsterdam, Melbourne and Copenhagen.