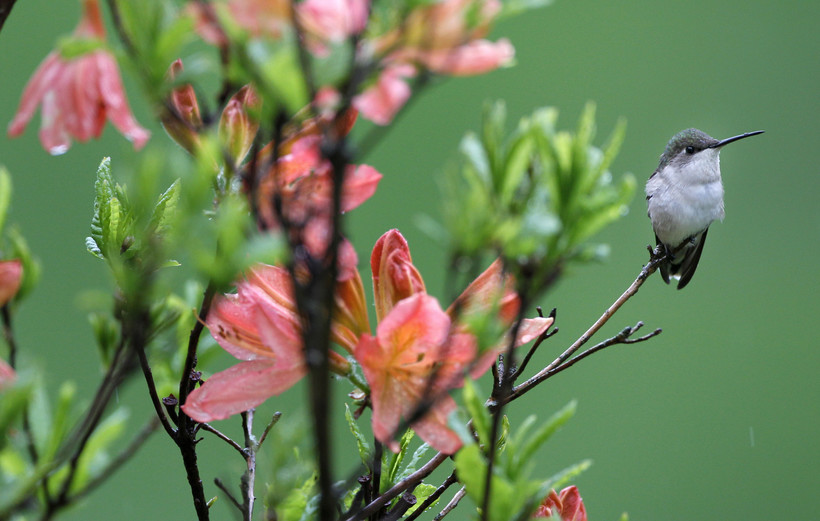 A female Ruby-throated hummingbird sits on the branch of a Rhododendron in Moreland Hills, Ohio on Wednesday, May 18, 2011. The tiny birds winter in Mexico, Central America, and on Caribbean islands and migrate north through much of the eastern United States in the Spring. Amy Sancetta/AP Photo

Higher temperatures and blooming flowers have hummingbirds flocking back to Wisconsin with dozens of sightings already reported by bird enthusiasts.

Mickey O'Connor, an avian zookeeper at the Milwaukee County Zoo, has yet to spot one.

"I’m anxiously awaiting my first one," O'Connor said in an interview on WPR’s "Central Time." 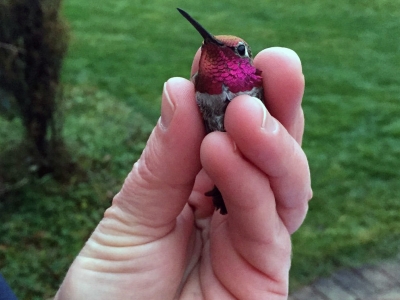 O’Connor is one of Wisconsin's three licensed hummingbird banders who hope to learn more about the species’ health and migration patterns.

"There’s been little banding of hummingbirds in the state," O’Connor said. "We don’t really know where Wisconsin hummingbirds are going. There’s many hummingbird banders down South, so we’re hoping that the more bands we get on these birds, we’ll start getting some feedback."

O’Connor estimated she and another bander in Wisconsin have tagged thousands of hummingbirds over the years. She started banding songbirds in 1997 and hummingbirds eight years ago.

Some hummingbirds handled by O'Connor have had dented or damaged bills, possibly from territorial disputes or hitting windows. Others have had their legs tangled in spider webbing or plant debris. But O'Connor said the vast majority appear in good health with excellent weights and plumage condition.

Banding a hummingbird requires special training because the birds are tiny. O’Connor said a male might weigh as much as a penny, and it can feel like holding "a big dragonfly."

Ruby-throated hummingbirds are the most common in Wisconsin. O’Connor said the middle or end of May is usually their peak season for bird watchers.

Attracting hummingbirds with feeders at home can be tricky, O’Connor said. The birds enjoy sugar water at a 4-to-1 ratio, which means routine feeder cleaning.

"It can ferment and spoil rather quickly, especially if it’s warm and in the sun. So generally you want to clean them every two to three days depending on the weather," she said.

Another approach from O’Connor: Just plant lots of flowers. Try some from the cuphea family or others such as flowering tobacco, beardtongue or turtleheads.

What To Know About Hummingbirds' Return To Wisconsin 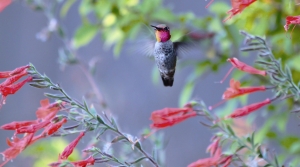 Only three people in Wisconsin are licensed to band hummingbirds. We meet one of them and learn about what makes hummingbirds unique and how we can attract more of them to our yards.