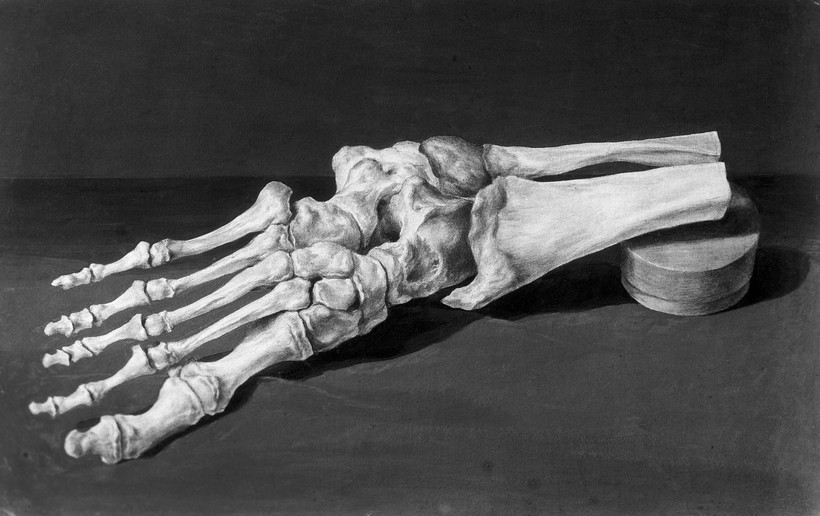 Why ostrich feet are better and how human ancestors went from standing in trees to walking the planet, according to the fossil record
By Steve Paulson
Share:

Paleoanthropologist Jeremy DeSilva loves fossils, especially remnants from our ancient hominin ancestors. He’s trying to crack the mystery of how exactly we evolved from a small ape living in trees to the species that would come to dominate the Earth. This requires meticulous detective work — finding a skull here, a bone there — and then reconstructing how these creatures moved around, found food and avoided giant lions and hyenas.

There’s still a lot we don’t know, but DeSilva is convinced about one thing: our ancient ancestors walked upright — and that changed everything. He outlines this argument in his book "First Steps: How Upright Walking Made Us Human."

Steve Paulson with Wisconsin Public Radio's "To the Best of Our Knowldge" went to Dartmouth College to visit DeSilva in his basement lab, where he has drawers full of replicas of all the great fossil discoveries about human evolution.

This interview has been edited for length and clarity.

Steve Paulson: What do these fossils tell us about our evolutionary history?

Jeremy DeSilva: What we can tell from studying these fossils is that the earliest members of our lineage didn’t have large brains like we have today. They weren’t using sophisticated technology, and they weren’t talking.

They were moving on two legs. Bipedalism is the most ancient human adaptation. It's what happened first.

SP: So walking upright is essentially what made us human?

JDS: Exactly. It set the stage for all the things that happened later, from our language and our dietary flexibility, to our reliance on technology and tools, to the way we give birth and raise our children. All these things really have their roots in how we move.

SP: And yet our closest relatives — chimpanzees and gorillas — are not actually bipedal. They don't walk like we do.

JDS: They can get up on two legs, but it's not a very efficient form of locomotion for them. Their knees are bent. They can't support their bodies on a single leg, so they fall over and they wobble.

SP: They knuckle-walk. When they're getting around, they're usually on all fours, with the knuckles on the front hands down on the ground.

JDS: That's exactly right. One of the hypotheses for years and years is that the common ancestor we shared with chimpanzees would have been a knuckle-walker, and that bipedalism evolved later. Now we can test this idea by looking at fossils from that time period, 6 to 10 million years ago. We don't have many, but what fossils we do have are not from knuckle-walkers. They're from apes that were living in southern Europe — in France and Italy and Spain, Greece, Turkey.

The forests of Africa in this time period had spread north and hugged what is today the Mediterranean. And apes love forests. They love trees that are producing fruit. But what we're finding is these apes tend to be somewhat upright in the trees, holding onto branches above them and moving on two legs in the trees.

SP: Standing upright in trees sounds really counterintuitive. It seems like there would be a better way to live in trees than standing on two legs.

JDS: It certainly does. But it could be that uprightness goes back further than we once thought. And there were different experiments going on in how to move from point A to point B. 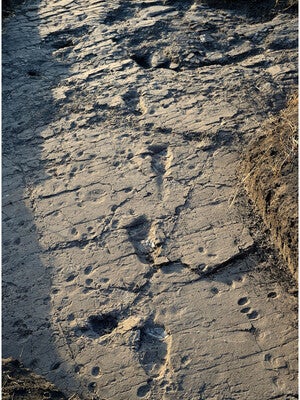 With the famous Lucy, not only do we have her skeleton, but we have bones of lots of other individuals that were found near her. Her species even left us these extraordinary footprints in Tanzania known as the Laetoli footprints.

So from the footprints and the skeletons, we can infer from their gait that how they walked was a lot like ours. They landed with a heel strike. They transferred a lot of their weight to their big toe, like we do. They had a slightly flatter foot than we do, but if you could see Lucy just walking along at a distance, you wouldn't really notice a difference. She wasn't hunched over. She didn't walk like an upright chimpanzee. She walked a lot like us. So by 3 million years ago, you have a very humanlike gait that had evolved in Lucy and her kind, what we call Australopithecus afarensis.

SP: You’ve said that if you could magically go back to any time, you'd go back to the time of Lucy. 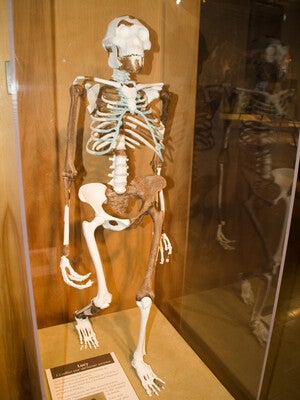 SP: What did Lucy eat?

JDS: We can tell by studying the isotopes in their teeth that they were beginning to eat just about everything in their environment. They were no longer specialized fruit eaters like modern apes are. They were eating grasses and seeds. They were eating nuts, flowers and fruit, they were eating meat probably scavenged from carnivore kills from the night before, eating insects, digging up grubs.

SP: I'm trying to picture Lucy and her companions. Just 3.5 to 4 feet tall, they would be sitting ducks for the big carnivores.

JDS: That's right. Not only did you have large cats, but you had enormous hyenas living in the same environment. 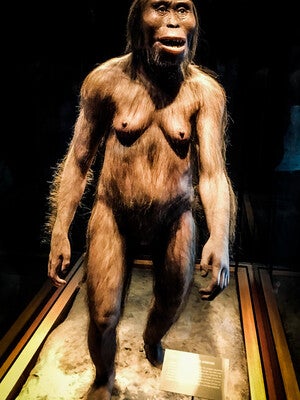 A recreation of Lucy welcomes visitors to the Museum of Anthropology and History in Mexico. Ernesto Lazaros (CC-BY-SA)

A lot of folks think that the origins of our lineage — going back to Darwin's time but then really popularized in the 1950s and 1960s — was this idea that we only survived because we were wielding weapons, and bipedalism happened because we could free the hands for tools and weaponry and that we were a violent, bloodthirsty ape. Instead, we were the hunted, we weren't the hunters.

So how did a slow biped surrounded by predators on a dangerous landscape — how did our ancestors survive? They looked out for each other. They took care of each other. When somebody was injured, they didn't leave them for dead. They brought them to a tree where they could heal and they probably brought them food and kept watch over them.

One of the things that we should celebrate about being human is our cooperative nature and our compassion for one another. You know, we can be awful to each other, but we often overlook how good we can be to each other as well.

SP: So this is a story about our very humble origins. Our ancestors were not kings of the Savannah.

JDS: Absolutely. One thing that has struck me as I study these fossils that are millions of years old, I am amazed that they survived. Of course, many of them went extinct, but enough survived so that we are here today. So the resilience, the ingenuity, the creativity, the ability of our ancestors to survive despite all the odds stacked against them is pretty remarkable.

SP: There is a bird that’s an interesting counterexample to the bipedalism of humans, and that's the ostrich, who can run very fast on two legs. Why are they so much better at running than we are?

JDS: A couple of reasons. Their legs are all bone and tendon. They don't have any muscles in their legs or feet. All the muscles are up in the body. It allows their legs to go faster — ostriches can run 45 miles an hour. 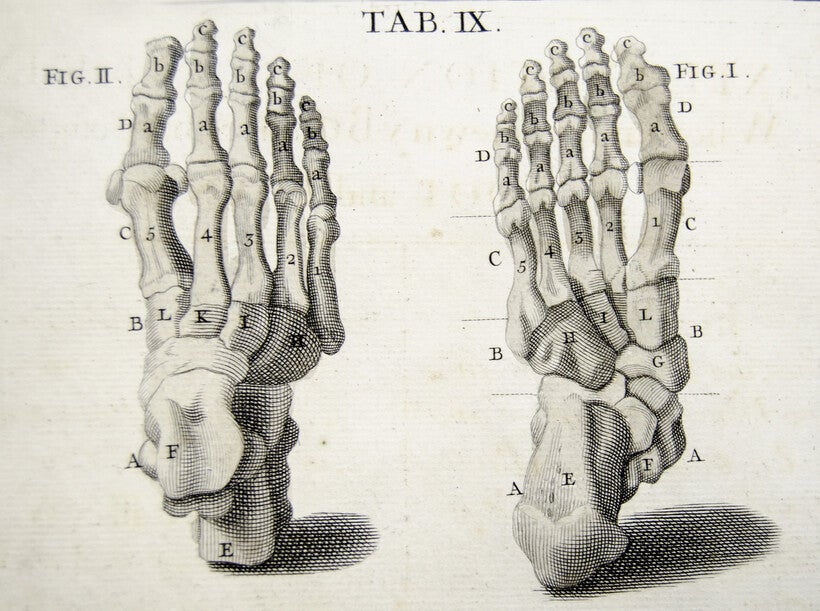 The bones of the human foot. University of Liverpool Faculty of Health (CC-BY)

So why is that? Well, we descended from apes. We are primates, and primates live in trees. And in trees, you need a mobile foot. Think about an orangutan’s foot, a chimpanzee’s foot. They can use their foot in the same way that I use my hand to grab onto things.

The bones that we have in our foot are the exact same 26 bones that a chimpanzee has. They're just tweaked a little bit, and that converts our foot from a grasping organ, like a chimpanzee’s, into one that can push off the ground. But we still have those 26 individual bones. And what are the results? Well, you get plantar fasciitis, you get an ankle sprain.

SP: You're saying this is actually a badly designed foot.

JDS: Oh, it's a disaster. Look, evolution works with whatever preexisting form it has and it tweaks and tinkers and modifies. It doesn't create perfection. It creates just good enough to survive.

SP: By contrast, what about an ostrich foot?

JDS: Think about the ostrich lineage. It doesn't come from an ape or a primate. It is descended from bipedal dinosaurs. The bones of their ancestors’ feet have fused together into a single, rigid column. They only have eight bones in their feet, so there’s less capacity for motion. Instead, their foot looks a lot like the Paralympic prosthetic blade that athletes use with that single rigid structure that can hit the ground, store elastic energy and then push off the ground and propel them into their next step.

SP: Which raises some fascinating questions. If we survive for a million more years, will we evolve to have a better foot? Could some of those 26 bones fuse together so that we'd have more of an ostrich foot? And with new technology, could we make a better human foot?

JDS: Sure. I can absolutely imagine that there could be technology that could improve the anatomy of the human foot.

SP: What would your ideal human foot look like?

JDS: Oh, it would be an ostrich foot! I'd totally have an ostrich foot and leg, so you can run 45 miles an hour. But no, if we could go a million years in the future, I don't think we'd have a dramatically different kind of foot.

One reason is that we solve problems culturally. If somebody has foot problems, we bring them to the doctor, we take care of them, we wrap them up in a bandage, we give them ice and ibuprofen to control swelling. So we've come up with all sorts of ways that we can solve these anatomical and biological problems.

We are a biocultural animal. Ostriches aren't. 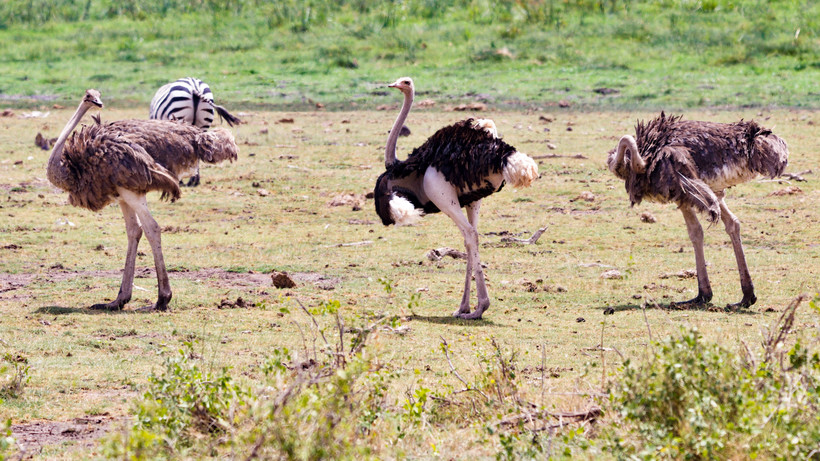