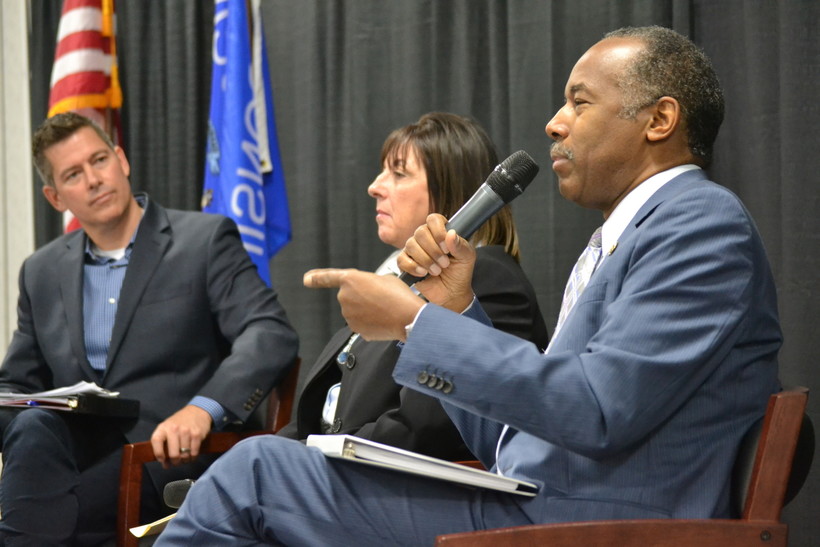 U.S. Department of Housing and Urban Development Secretary Ben Carson is promising to bring more resources to fight poverty and homelessness in rural parts of Wisconsin and the United States.

Carson made his pledge at the 5th Annual Hunger & Homelessness Summit organized by U.S. Rep. Sean Duffy, R-Wisconsin, in the central Wisconsin community of Rothschild.

Carson said he is putting together a multi-agency task force of both public and private groups to address rural poverty. He is also evaluating the rules and policies for existing HUD homelessness assistance programs to funnel more aid to rural parts of the country.

"I believe that there has not been enough emphasis on rural poverty. It's very substantial. In fact, I've been making an argument that we ought to change the name of my agency to 'Housing and Community Development,' because a lot of people don't live in the urban areas," Carson said in an interview with Wisconsin Public Radio before the event.

In his remarks, Carson said rural homelessness is often linked to drug addiction and mental illness.

"If a healthy person loses his job, it's a big blow, but in most cases he can dust himself off and find another job," Carson said. "But those who struggle with diseases of the mind and addictions of the body are not able to jump back into the fight so easily ... and they are most at risk not only to become homeless, but to stay homeless."

Duffy said that predominantly rural areas like his northern Wisconsin congressional district are being shortchanged because most of the money earmarked for poverty programs goes to urban areas.

"We're not getting a fair shake at the dollar flow and the program flow into our communities. Whether it's homelessness or hunger or drug abuse, it's just as profound for our communities as it is for urban America," Duffy said. "Rural America is forgotten."

Carson said the government’s approach to homelessness should be based on "facts and evidence rather than ideology."

"When we consider the enormous costs of emergency room care, the potential danger and expense of extra policing and other situations that arise for homeless populations, it actually saves taxpayer dollars," Carson said. "It costs $43,000 to $44,000 to have homeless people on the streets, and less than half of that to house them. You have to look at the facts rather than the ideology because we have a responsibility to the taxpayer."