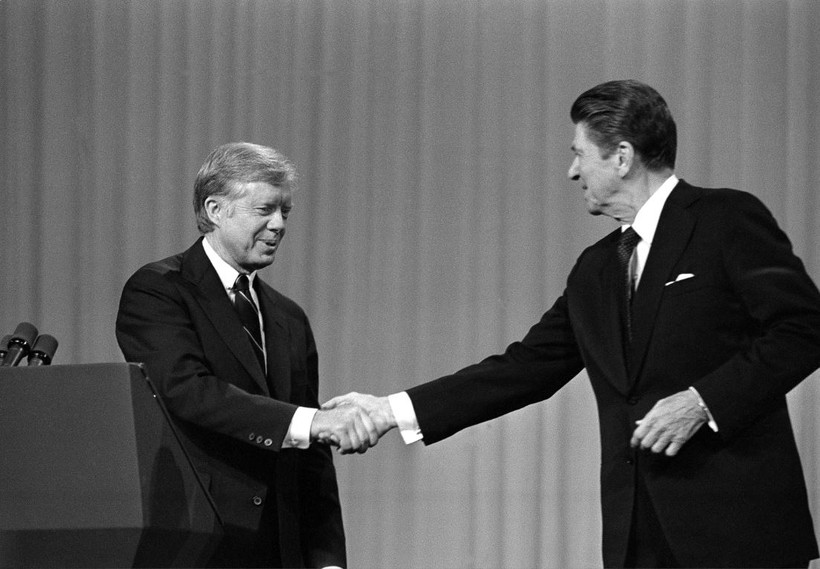 How Reagan Helped Usher In A New Conservatism To American Politics

It was 1976, and something was changing in American politics.

Ronald Reagan had lost the Republican presidential primary to Gerald Ford. Four years later, Reagan defeated incumbent President Jimmy Carter and helped usher in a new conservatism in American politics that reverberated throughout his eight-year presidency and beyond.

Author Rick Perlstein's new book analyzes the triggers that molded this conservative wave and its political pawns. "Reaganland: American's Right Turn 1976-1980" bookends a series that relives the rise of conservatism in an America that had been moving left of center.

Perlstein writes that conservatism in the 1950s was dying. It wasn't relevant anymore, something that Barry Goldwater served as a prime example of.

In Perlstein's first book in the series, "Before the Storm: Barry Goldwater and the Unmaking of the American Consensus," Perlstein writes that Goldwater was a figure who campaigned on ending agricultural subsidies, ending the progressive income tax and condemning Brown vs. Board of Education. He advocated for risking nuclear war against the Soviet Union.

"Conservatives love this, and they basically take over the party from the ground up in a very sort of conspiratorial way," Perlstein said. "It's not like a majority of Republicans want these kind of views."

"The last page of the book is all these pundits saying that the Republican Party is literally dead as a part of American political life unless they purge the conservatives," he said.

But there's a big difference in the way Goldwater conservatives handled his campaign compared to what conservatives would do about 15 years later.

"If they can take the public exactly where they are, even to stoke up those resentments, stoke up those fears, which they do with great aplomb, they can kind of seduce them into voting for candidates who do this stuff Barry Goldwater wanted to do, but have a much more broad mass appeal," he said.

Their approach worked: Not only does Reagan win the presidency in 1980, but he secured the votes of "Reagan Democrats," people who formerly voted Democratic but "are terrified of their daughters getting pregnant or their sons saying they're gay," Perlstein said.

Other factors were at play, too, particularly the movement of the evangelical Christians. Prior to the Reagan era, these culturally conservative Americans generally didn't participate in politics, sometimes even forgoing voting altogether.

But social changes of the era invited discontents into the political arena, and those discontents included preachers. Instead of historically being divided over theology, preachers from denominations like southern Baptist, Pentecostals, Mormons and Jews needed to work together to "beat back the satanic forces of liberalism," Perlstein said.

Reagan also was the first presidential candidate endorsed by the National Rifle Association — an organization that underwent sweeping change during this period.

The NRA began after the Civil War with a goal of improving shooters' marksmanship. Throughout most of the 20th Century, members joined to learn about hunting and guns.

But with rising crime and urban riots in the late 1960s came a push by some members of the NRA to organize against gun control. This faction of the NRA diverged from the organization's leaders, who were by and large supportive of milder gun control laws; for example, banning Saturday Night Specials or cheap handguns.

"You begin to see a faction organizing sedulously underground to take over the organization and turn it into a political machine for opposing all gun control," Perlstein said.

With concerted efforts to undermine the NRA's leaders during a late-night meeting in 1977, the faction gained control. They fired the current staff. And they relayed that only those interested in repealing gun control laws should be part of the organization.

Ronald Reagan had advocated for that, saying a few years earlier on a radio show that outlawing guns results in arming outlaws.

"That was yet one more of these discontents that this new right political faction was organizing in order to unhorse liberalism in American politics," Perlstein said. 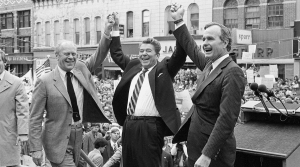 In 1976 Ronald Reagan lost the Republican nomination. He was dismissed as too ideological and too old to be president. Eight years later he swept the national election for his second term as President of the United States. Our guest chronicles what changed in American culture and politics during that time and the rise of conservatism in America.