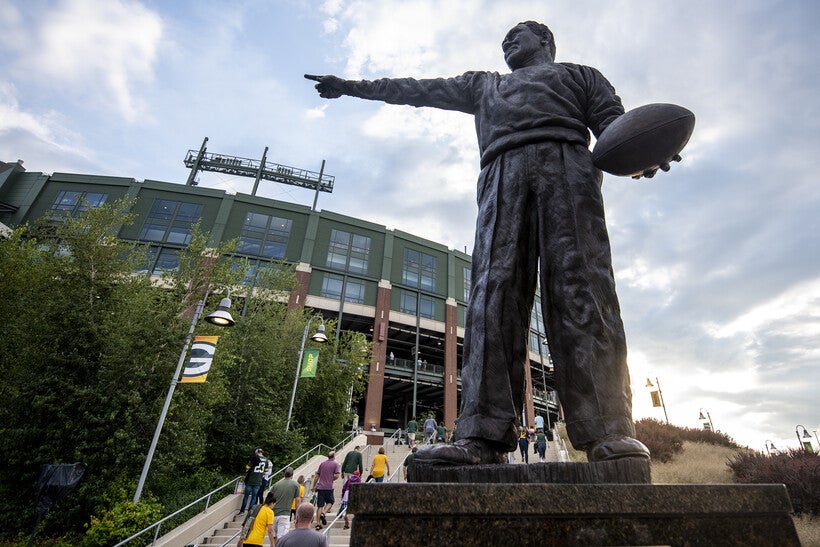 How prohibition helped save professional football in Green Bay

The city's disregard for prohibition's alcohol ban made it popular among NFL teams
By Joe Schulz
Share:

For 13 years beginning in 1920, Prohibition banned the consumption, manufacture, transportation and sale of alcohol in the United States. But in the Wisconsin city of Green Bay? Not so much.

During Prohibition many of the city's saloons were converted to "soda" establishments that continued selling alcohol. And it turns out that the city's reputation as a beer-loving scofflaw helped save professional football in the smallest market in pro sports.

In fact, Jacobs said the city’s three breweries were busted for selling alcohol during prohibition. One brewery even had an arrangement with a local taxi company where the company would deliver beer to customers.

At one point, the mayor was out of town on a business trip and federal agents came to Green Bay, Jacobs said. The "dry agents" put padlocks on different establishments that were reportedly selling alcohol.

"The city council voted that they were not going to follow the feds’ padlock laws because they were losing tax money," Jacobs said. "Well, a week later, the mayor comes back and goes, 'We can’t do that.'"

Although the city couldn't publicly disregard federal law, its enforcement was anything but strict.

Green Bay of 1920 had a population of a little over 30,000 and was smaller than six other cities in Wisconsin, including Superior and Oshkosh. Jacobs said the city was industrial, had three train depots and numerous Catholic churches.

The NFL at that time was also much smaller than it is today, and it was nowhere near as organized, according to Green Bay Packers Team Historian Cliff Christl.

"Teams kind of scheduled their own games in the early years," he said. "Some would play 13 or 14 (games), and some would play no more than a handful."

When the Packers joined the league in 1921, Green Bay was the second-smallest city in the NFL, Christl said. Some of the then-small-town teams were located in the Ohio cities of Canton, Columbus, Dayton and Akron.

By the end of the decade, Christl said many of those small market teams folded for financial reasons — but not the Packers.

"Part of what saved the Packers was the fact that the visiting teams enjoyed coming to Green Bay," he said. "One of the reasons was that the city basically flaunted the 18th Amendment, ignored it."

In the ’20s, Green Bay was the most popular stop in the NFL and teams would often try to schedule several days there for its bustling bar scene and famous red-light district, Christl said.

When a Milwaukee Journal reporter came to Green Bay to write a story about the city’s disregard for the laws disallowing alcohol consumption, Christl said, the reporter’s conclusion was that "this northern city is by far the wettest spot in Wisconsin."

According to Christl, at a banquet honoring the first five Packers inducted into the Pro Football Hall of Fame, former Packer John McNally, nicknamed Johnny Blood, shared a memory from playing in Green Bay during prohibition.

"Back about the time I came here to play, federal agents made a raid and arrested 60 or 65 barkeepers. But when it came to court, the barkeepers went free and two of the federal agents were thrown in jail. That's what always impressed me about the spirit of Green Bay," McNally said, according to Christl.

The only league meeting the NFL has ever held in Green Bay came during prohibition.

In 1927, the NFL held three meetings over the course of the year that led up to the league cutting its membership from 22 teams to 12, and one of those meetings just so happened to be held in Green Bay, the Packers historian said.

"Green Bay did. And the officers of the league — as well as the owners — when they left told the Press-Gazette that they couldn't have had a better time than they had in Green Bay," he said. "You can let your imagination run as to what that meant."

But Christl said the Packers’ success on the field was the main reason the team survived. That’s because sports writers loved the David versus Goliath angle of the small-town Packers defeating big city teams.

"As they beat the Giants in New York and the Bears in Chicago, they became a huge draw," he said. "For example, at a time when 12,000 was a fairly good-sized crowd for most NFL games, the Packers were drawing 30,000-plus. They were drawing the biggest crowds in the league when they visited the Polo Grounds in New York where the Giants played and Wrigley Field in Chicago where the Bears played."

What happened to Wisconsin breweries during prohibition?

After a visit to Potosi Brewing Company, Lis Shea became interested in what happened to Wisconsin's breweries and alcohol production during prohibition. The Cross Plains resident reached out to WHYsconsin to get a glimpse into this part of Wisconsin's history.

The answer to a question asking what municipality Lambeau Field is located in is easily found, but the history behind selecting the site is "fascinating," the Green Bay Packers official historian said.