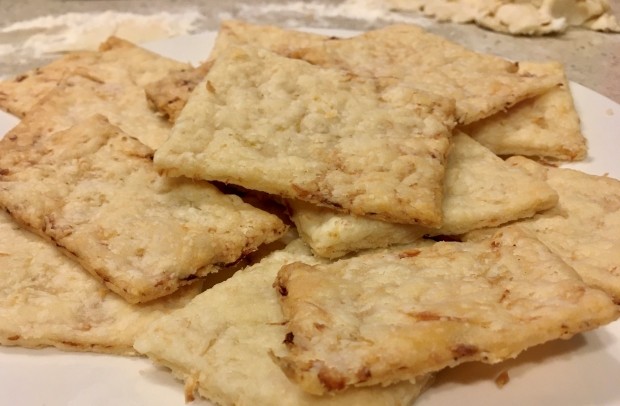 How To Make Methunky, The Beloved Czech 'Sauerkraut Cookie'

The Hyper-Local Snack Is A Kewaunee County Favorite
By Mary Kate McCoy
Share:

Kinjerski, who lives in Kewaunee, said the recipe can be traced back to Czech settlers in the region. She referred to it as "classic farm cooking" — people had the ingredients on hand and nothing went to waste.

But beyond that, exactly when, where and why methunky became a popular treat remains to be seen.

The mystery behind it is part of what made Sara Krouse from Algoma reach out to WHYsconsin. She wanted to know about the origins of the snack she stumbled upon among friends in her region.

But as Kinjerski says, "It's not going to be in the recipe books. I've even looked into old recipe books and I've not found it." Similar to Krouse’s experience, methunky has mostly been passed down through word of mouth.

Today it remains a fairly hyperlocal food with roots in the Kewaunee County area where many Czech immigrants settled.

Methunky is a huge hit in Kinjerski’s family. Every summer, she makes 40 pans of it with her husband at Czech Fest in Algoma.

"Everybody just clamors over it," she said. "It just disappears — just flies, flies off the bar counter right away."

So What Exactly Is Methunky? And How Do You Make It?

It’s a simple recipe. You begin by just dumping all of the ingredients — flour, salt, cracklings and sauerkraut — into a bowl. Then you get your hands dirty with the mixing. 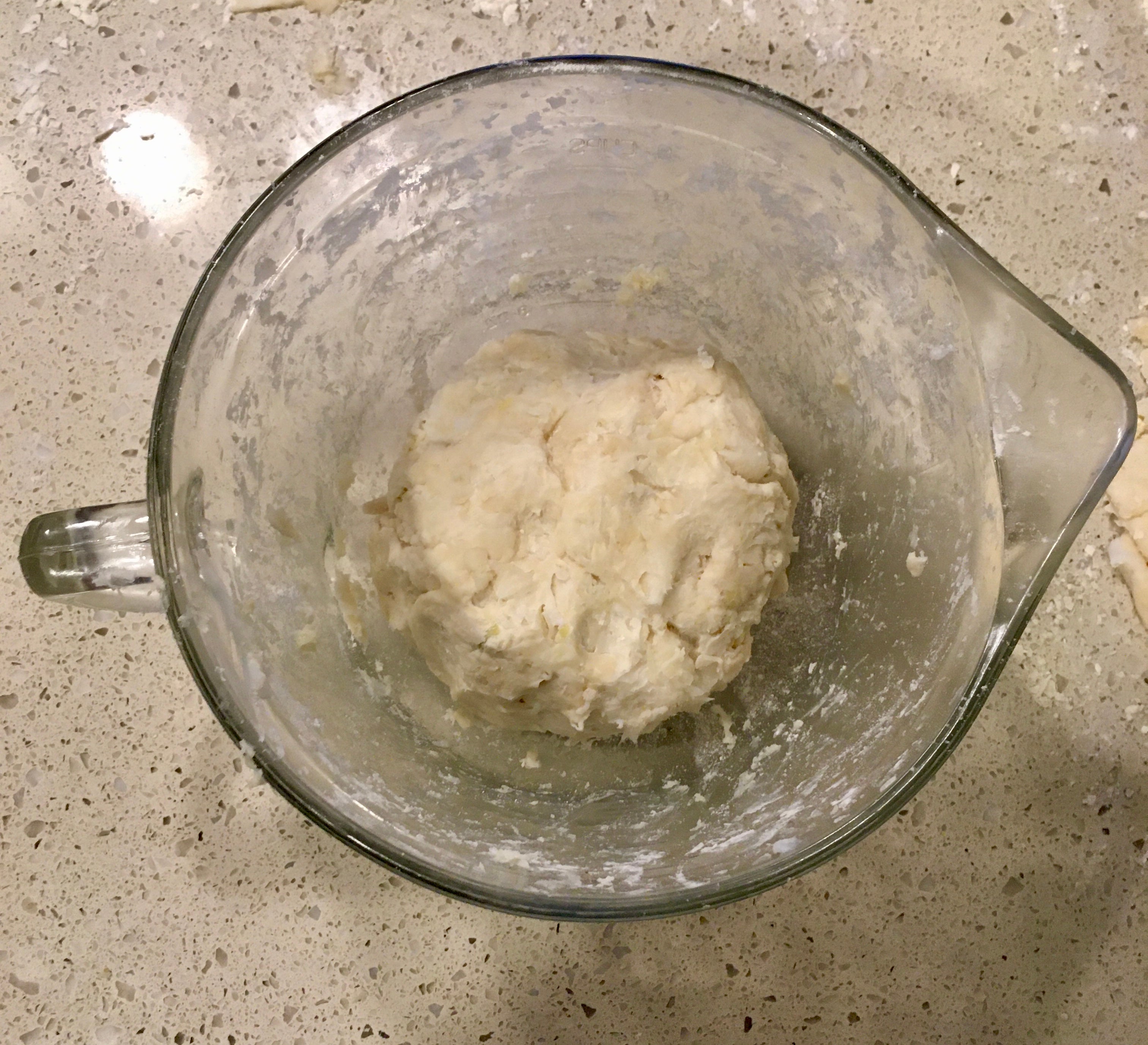 If you’re concerned about the sharpness sauerkraut might add to the recipe, don’t worry, that tanginess is muted by the other ingredients and baking. The cracklings — browned pork fat — also give it a unique flavor, Kinjerski said. Though you can feel free to substitute lard if you can’t find it.

The consistency is like a pie dough, just with chunks of sauerkraut peppered in. When you’re ready to roll the dough out, grab a rolling pin and lots of flour — seriously, lots of flour. You’re aiming for a crispy, but still slightly chewy texture, so roll it out to about a quarter inch thick.

While looking into this WHYsconsin question for Krouse, I must admit I was skeptical of this Czech snack. "Intriguing" was one of the first word used to describe it, the description then carried into "a cross between cardboard and oatmeal."

Naturally I had to try it for myself. So one evening in the fall, Krouse and I met over Zoom with her friend Scott Prokash, who had a recipe from a local methunky maker.

Prokash didn’t shy away from its weirdness: "The first time you eat it, like you're chewing it and you're like it's kind of crisp and kind of doughy and you're like, why am I eating this?" he said. "And then all of a sudden it tastes like more, and you start eating it and liking it, just because it's really unique."

After adding all the ingredients together, Prokash cautioned just how sticky the dough would be.

"Oh my God, the first time I made it, it was sticking to my rolling pin, my hands, my belly. I was in big trouble," he said.

Once we wrestled the dough to the desired thickness, Prokash suggested cutting it into squares with a pizza cutter.

"I don’t think they had pizza cutters in Czechoslovakia in the 1800s," Krouse mused. But it was true, it made cutting the sticky dough a breeze. 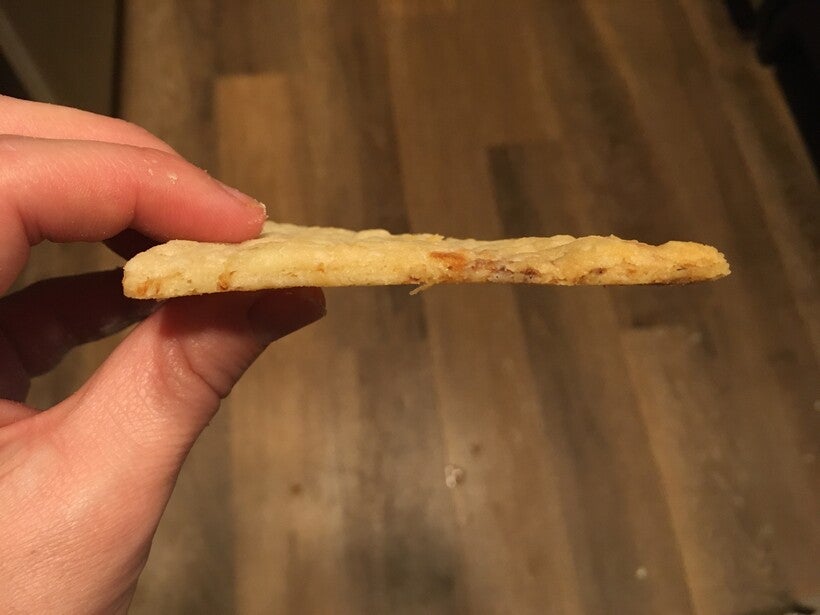 Then we put the methunky squares into the oven at 400 degrees for about 15 minutes, until they were lightly browned.

After those 15 minutes were up, the methunky had a nice golden brown color and the kitchen was smelling phenomenal — almost as if we were baking parmesan crackers.

I had high expectations for the methunky at this point. To be clear, I love sauerkraut — and it didn’t disappoint. The finished methunky had a crisp bottom and a mild tangy flavor thanks to the sauerkraut.

"I wonder if you could take it to the next level with cheese in it?" Prokash said.

Go ahead and add some cheese, or like Prokash, sprinkle it with caraway seeds — whatever sounds good to you.

"Do you think you’ll bring this to your next social gathering in 2022?" Krouse asked me after we’d finished our Zoom cooking show.

Yes, I definitely will. And I’ll take Kinjerski’s advice and "put some happy in that recipe!" 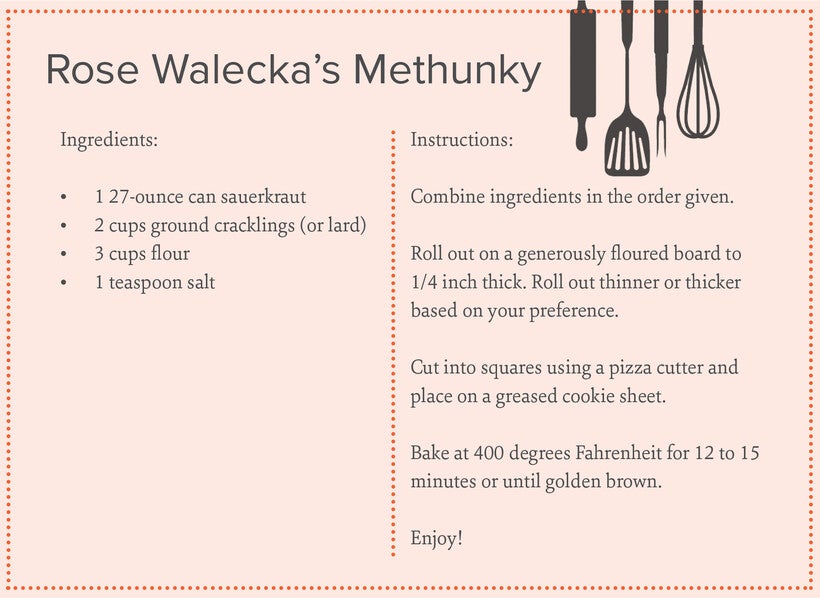