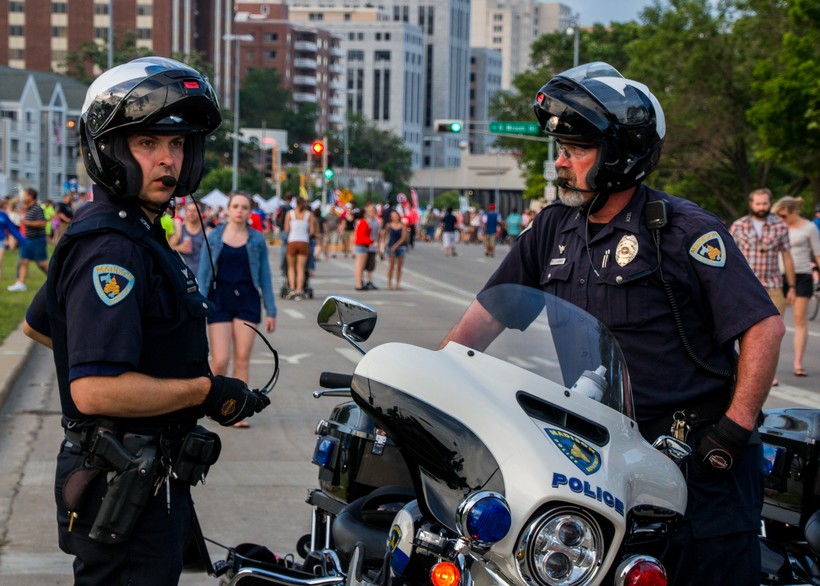 How Does The Madison Police Department Pick Its Recruits?

A new class of recruits starts working its way through the Madison Police Department Training Academy on Monday at a time when public confidence in American law enforcement is the lowest it's been in more than 20 years, according to a recent Gallup poll.

Before the academy starts, the Madison department selects a class of recruits. In addition to events it holds in Madison, MPD makes recruiting visits to colleges and universities across the upper Midwest. This year, recruiters will go to 31 campuses.

Madison police Sgt. Brian Chaney-Austin remembers the first time he heard of the department. It was at a college job fair in Illinois where he met Madison police Chief Mike Koval, who was a sergeant and training supervisor at the time.

"(Koval) stopped me dead in my tracks and said, 'Hey you, what are you doing? I see that you're a criminal justice major,'" Chaney-Austin recalled.

He went back to the job fair the next year and again met with Koval.

"I shared with him my philosophy and a little bit more about my upbringing and some of the negative encounters I've had with police in Chicago but also some of the good experiences I've had," Chaney-Austin said.

Chaney-Austin was hired by the MPD shortly after he graduated with a criminal justice degree. But recruiting coordinator Sgt. Tim Patton said the department looks for people with a wide variety of education and experiences, not just criminal justice majors.

"People who have strong communication skills, people who have demonstrated commitment to our city or whatever city they're living in," Patton said. "Service-oriented coaches, teachers are great cops."

The application process to become an officer in Madison takes almost a year, with applications due in November. After several rounds of testing and interviews, job offers were made to 23 recruits for this year's class. On the first day, recruits are sworn in.

The first day is both "anxious" and "exciting," Capt.Tom Snyder, who oversees hiring and training, said.

The bulk of what this year's recruits will learn comes from 720 hours of training the state Department of Justice requires for all certified law enforcement officers. The academy requires an additional 144 hours to allow the future officers to dive deep into topics like cultural competence and ethics, Snyder said.

"We bring in experts from the (Wisconsin) Innocence Project, we take the Harvard implicit bias test, we have outside instructors come in," Snyder said. "We are able to do things and spend more time on these respective areas than they do in the technical colleges for the most part."

The Madison Police Department is one of four departments in the state with an employer-based training academy, meaning it hires and trains its own employees. This year's class will be in the academy through the end of February.

Recruits are beginning their training at a time when police are facing increased scrutiny, Snyder said. What that could mean for those beginning their law enforcement careers remains to be seen.

At the police academy, the recruits will cover topics like bias and de-escalation.

But, concerns about policing have affected recruitment, Snyder said.

"We had less applications last year, and I really believe a lot of that had to do with some of the tensions that were happening throughout the country," Snyder said.

This story is part of an ongoing WPR News series looking at people who are beginning their law enforcement careers. Reporter Bridgit Bowden is spending the next few months following a class of recruits through the Madison Police Department Training Academy. The stories can be heard on Morning Edition, the Ideas Network and online at wpr.org.