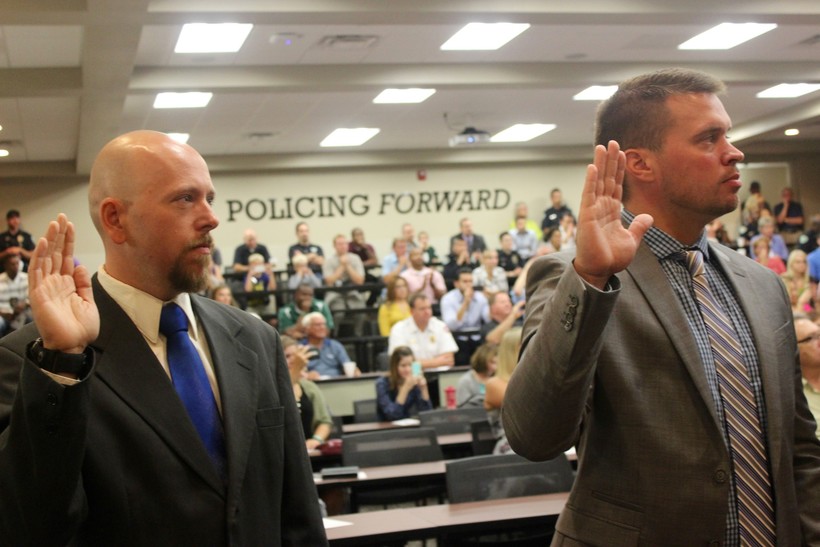 How Do Police Learn About Their Unconscious Bias?

This year's class of Madison Police Department recruits are entering the field at a time when more and more people are discussing implicit bias and its role in the high-profile killings of African-Americans by officers. The recruits recently took Harvard's implicit bias test to determine their own unconscious biases.

The test works kind of like a video game. It measures the speed at which the participant associates good or bad words with black or white faces. It takes about 10 minutes, and at the end it gives a level of implicit bias. Recruit Ruben Gonzales didn't think he had a preference for one race over the other, but learned from the test that he does.

"I was kind of shocked by the response," Gonzales said. "And then I took it again; and I got the exact same thing. And so, it kind of hit hard, because I wouldn't think that I had these implicit biases."

The makers of the test define implicit bias as stereotypes outside of awareness or control. Almost everybody has them, and they are deeply ingrained in our culture.

Gonzalez said he felt better when he realized most of his classmates had some level of implicit bias, too.

"Discussing it with some of the people that are in class now and just, like, acknowledging this doesn't make you a bad person," he said.

Officer Jared Prado is part of a group within the Madison Police Department called Judgment Under the Radar that trains officers on implicit bias. He asked the recruits to move around the room based on their test results. People with strong preference for one group moved to one side, no preference to the other side and moderate or slight preference in the middle. The recruits spread all the way across the room.

Recruit Ray Gillard grew up in a poor, mostly African-American neighborhood on the south side of Chicago. He's black, and he was surprised some of his classmates had high levels of implicit bias.

"You just see how the room became divided when we took the test," Gillard said. "It just kind of opened your eyes that they are still from a different area so, maybe, they have the same biases."

Gillard said he hopes knowing about their biases will help the recruits be fair when they eventually hit the streets as officers.

"Everybody's going to have their biases, but it's whether you act on those or not," he said.

Next, Prado showed a historical timeline of law enforcement's relationship with African-Americans. The recruits learned about "plantation police" who kept slaves from running away. They were confronted with images from "Bloody Sunday" in Selma, Alabama. They saw videos from recent killings of unarmed black men by police. Gillard said it was hard to watch.

"I didn't know that police in America first started as plantation police," Gillard said. "So that really took me back to the doubt, like did I really just join an organization that was originally started to discriminate against people of color?"

For Prado, it’s imperative police learn their history and not gloss over the ugly parts.

Still, confronting this history made Gillard question his decision to join the force. But, it also motivated him to do better.

"So, what made me want to come here?" Gillard asked. "I'm still unsure like why, why am I here. But I just want to try and make a difference so that people who come from the same background and a predominantly poor neighborhood don't experience the same things that I had to go through," he said.