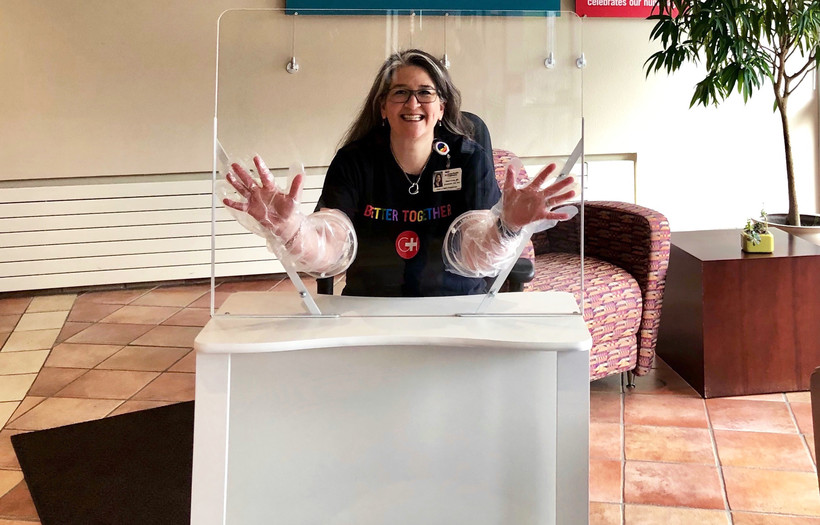 Dr. Alison Craig of Group Health Cooperative shows how to use the desktop droplet barrier that she conceived to protect doctors and nurses from coming into contact with droplets from people with COVID-19. Photo courtesy of Dr. Alison Craig

How A Co-Op, Jewelry Box Maker And Makerspace Made Health Industry A Bit Safer

Mike Fisher was on the phone at 10 p.m. on a Tuesday in late March when he first heard of an idea a local pediatrician had to protect health care workers from the spread of COVID-19.

This pediatrician, Dr. Alison Craig, devised a desktop droplet barrier, a plastic shield with two holes large enough for arms to fit through. Craig thought of the device while wrestling over ways to protect the staff of doctors she oversees as chief of staff for Group Health Cooperative of South Central Wisconsin.

Fisher, who lives in Madison, jumped on the idea.

He reached out to his boss and others at Heartwood Creations, a business in Rockford, Ill., that Fisher founded and sold to a close friend in 2007. Heartwood Creations sells handcrafted jewelry boxes, but production was suspended because of the spread of COVID-19. Fisher knew the equipment sitting there could be used to make these shields.

He texted four Heartwood employees at 7 a.m. Wednesday and by 10 a.m., those employees were working on prototypes of this design. On Friday, March 27, they came up with one they liked and started production. On Tuesday, March 31, the first six of 10 that have been constructed so far were delivered to locations in Madison.

"I'm proud of our team for rising to the occasion," said Fisher, who was on the phone with Chris Meyer, director of a Madison-based community workspace, Sector67, that Tuesday night. Meyer is the one who told Fisher about the project.

Before connecting with Fisher, Meyer received a message from someone in Group Health Cooperative's human resources department who was looking for help to make Craig's idea a reality.

That initial email resulted in about 100 replies from Sector67 members offering suggestions and ideas about how to turn the prototype into something workable. Some volunteers made an open source document available for others who wanted to make their own.

"But I asked (Fisher) if they might be interested in pursuing it at Heartwood, since I knew their production had dropped substantially and working with plastic is similar to wood, so it wouldn't take much for them to leverage their available equipment and people-power," Meyer said.

A Community Of Innovators

Only 9 days after the idea was sparked, we now have a full fledged product from a Midwest manufacturer ready to be shipped to health care organizations. Please share. I am speechless with gratitude for the team at Heartwood Creations. https://t.co/q92LZkonUC#COVID19 #GHCSCW pic.twitter.com/i7uZw5IfwM

Fisher said Heartwood is open to building more of these, which they are selling for about $400. Anyone interested in the product or in talking about how they can make their own can visit covidassist.net.

This past weekend, Fisher delivered two of these devices to Indiana. A doctor in Chicago also put in an order.

"It's just really exciting to see a glimmer of an idea transition into something where there is actually protective equipment being distributed across the country within like 14 days," Craig said.

Craig honed in on finding a solution to keep staff safe after hearing concerns about limited supplies of personal protective equipment such as face masks and gloves.

"As my anxiety increased about our supply, I started feeling the need to be creative with our resources and creative about our strategies of protecting our health care workers," she said.

That anxiety woke her up early one morning a few weeks ago. She started scanning the news online and saw photos of health care providers in South Korea — one picture in particular caught her attention of a health worker whose arms were fed through two holes in a Plexiglas shield.

So that morning, Craig reached out to Group Health Cooperative's chief medical officer and facility manager and pitched the idea.

"My inspiration was simply necessity," she said. 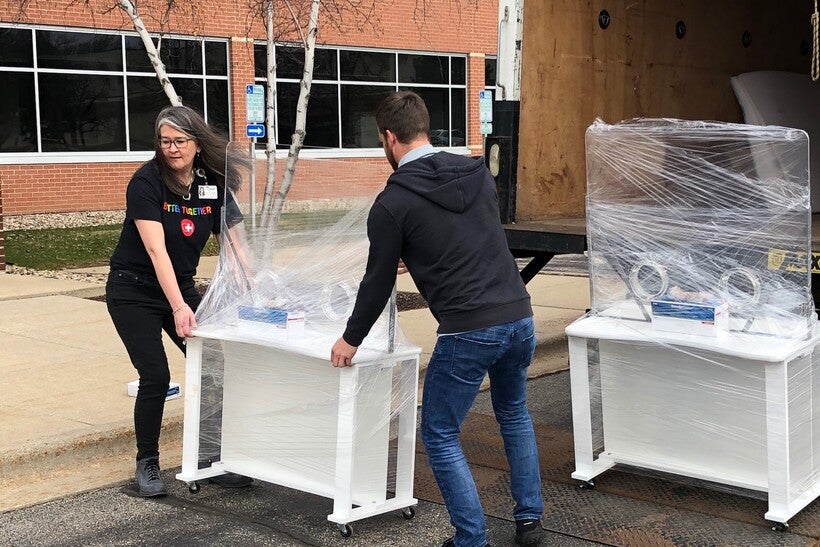 Desktop droplet barriers that were conceived by Dr. Alison Craig went through three phases of development before the final products were revealed and put into use. Photo courtesy of Dr. Alison Craig

The first prototype had shelving holding up a piece of plexiglass that had two holes about 6 inches in diameter drilled into them. Craig used a light fixture to secure protected plastic sleeves to the Plexiglass. This way, the health care worker can collect a sample of the patient without risking drops of contamination.

Fisher said the newer designs feature a desk with wheels to move the device around and a refined glove flange where the gloves meet the plexiglass.

The devices now deployed offer extra protection for the employees who are still wearing N95 masks, gowns and face shields.

"But we are concerned that even with that protective equipment that droplets could still splatter on the provider, that health care workers' body," Craig said.

Up until now, scientists have said the virus spreads by coughing and sneezing droplets. While that's still true, recent research suggests COVID-19 can be spread by talking. 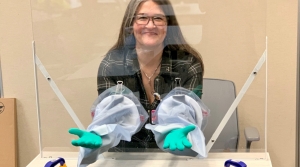 With protective equipment for medical staff in short supply, one Wisconsin doctor invented a portable desktop barrier to make COVID-19 testing safer. She talks with us about how it was built and why it will soon be available in more clinics around the state.