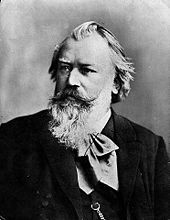 Johannes Brahms disliked insincere flattery.  But he sometimes went to great lengths to get an honest opinion of his composing and his playing.

In his autobiography, composer Karl Goldmark mentions receiving an invitation to a  house where two new Brahms compositions were to be performed for the first time--a piano trio and a string quintet. After the performances just about everyone came forward to compliment Brahms.  Knowing that Brahms tended to brush aside polite flattery, Gold/mark held back.

The next morning Brahms invited him to walk with him to visit some friends. As they walked along a mountain ridge at the edge of the woods, Golkmark realized that Brahms had invited him on the walk in hopes of getting a sincere evaluation of the pieces.

They came to a friend's house and found all the doors open in the morning sunshine.  No one was in sight.  Goldmark and Brahms walked into the music room.  On the piano they found volume one of Carl Czerny's technical studies--The School of Velocity--the bane of many a struggling student.

Brahms sat down and played the first etude in scales.  He made a hash of it--striking some notes three times while he tried to figure out where to go next.

A woman's voice called out from the next room, "Why, Franzi, what are you doing?  Play more slowly."

"Franzi," you are slurring terribly!" came the voice, "Why are you playing F Sharp?  It's F. F!  Play more slowly."

Brahms persisted, playing worse than ever.  "This is too much," the woman said.  "You played so well before.  You're just being spiteful."  She came rushing into the room, expecting to find a child pianist and was greeted with a chorus of laughter.

On the way home Brahms was in a particularly good mood, and Goldmark took the opportunity to offer him his second sincere critique of the day, telling him how much he admired the newly written trio and quintet.