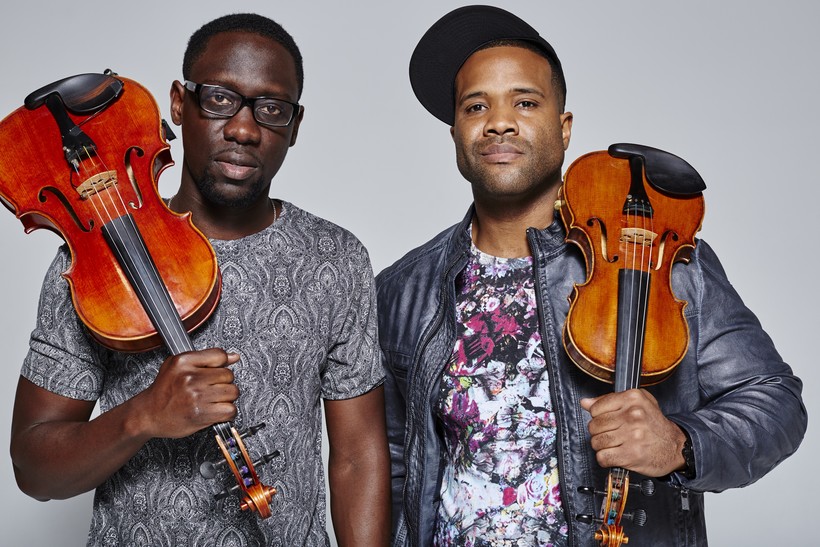 Hip-Hop And Strings: How Black Violin Is Changing The Music Scene, Challenging Stereotypes

With Black Violin's latest record, "Stereotypes," the hip-hop/classical duo aims to show the world that not only can the two genres blend seamlessly together, but that the performers behind the music can challenge the misconceptions about who can play the violin.

Black Violin is comprised of viola player Wil "Wil B" Baptiste and violinist Kevin "Kev Marcus" Sylvester. The two string players have been performing with each other since they met in orchestra class at Dillard High School of Performing Arts in Fort Lauderdale, Florida, years ago. Throughout their careers as musicians, they've been confronted with stereotypes about who can be a classically trained violinist.

"I'm a 6-foot-2 black guy that has been playing classical violin as long as I can remember," said Sylvester, who picked up the violin at age 9.

But these interactions were the genesis of "Stereotypes," released in 2015, and is a part of the duo's nationwide tour, including a performance Sunday at Weidner Center in Green Bay

"We were walking through an airport and people would always ask us what was in our case," Sylvester said, noting the most common guesses were either a trombone or a keyboard.

"And when we'd say violin, most of the time they're like, 'Wow, I would have never have thought that that was a violin in your case.' We're built like athletes," he continued. "We're built like football players or basketball players. But we're classically trained violinists."

Sylvester said he doesn't mind these conversations because he sees it as an opportunity to change peoples' perceptions of who can perform string instruments.

Growing up, both performers found themselves in two seemingly different musical spheres: hip-hop and classical.

As Black Violin was starting out, the duo would play outside of South Beach clubs in Miami hoping to catch the eye of a club owner or promoter. Sylvester said they were originally met with skepticism from people who didn't believe the two musical styles could be combined to create popular and powerful beats.

However, as Black Violin began performing out of the trunk of their car, the popularity of their music became undeniable. They began to perform with DJs in clubs and eventually made it to Showtime at the Apollo Amateur Night in New York where they swept the competition with their classical/hip-hop fusion in 2005.

Sylvester said he believes performing has opened doors for him throughout his life.

He and Baptiste earned full music scholarships to universities in Florida and they've been able to perform with musicians such as Alicia Keyes and the Wu-Tang Clan. They were also featured at President Barack Obama's 2013 inauguration.

A crucial to the mission of Black Violin is to help children discover what they love doing and breaking apart stereotypes about what they can achieve, Sylvester said. One of the things the duo has found to work for kids is challenging them to think differently about goals and careers.

"I think a lot of times we think, 'Oh well, this the way that everyone has always done it, so I have to do it this way,'" Sylvester said. "And we try to use our music and our message as a way to break that (mindset) and have kids to think outside of the box and not sticking to the stereotype of, 'a violin can sound like this.' 'Only a girl can do this kind of thing,' 'Only a boy can do this.'

Nah, anyone can do anything. Recognize your power. Do what you love. Love what you do. And do it unapologetically."