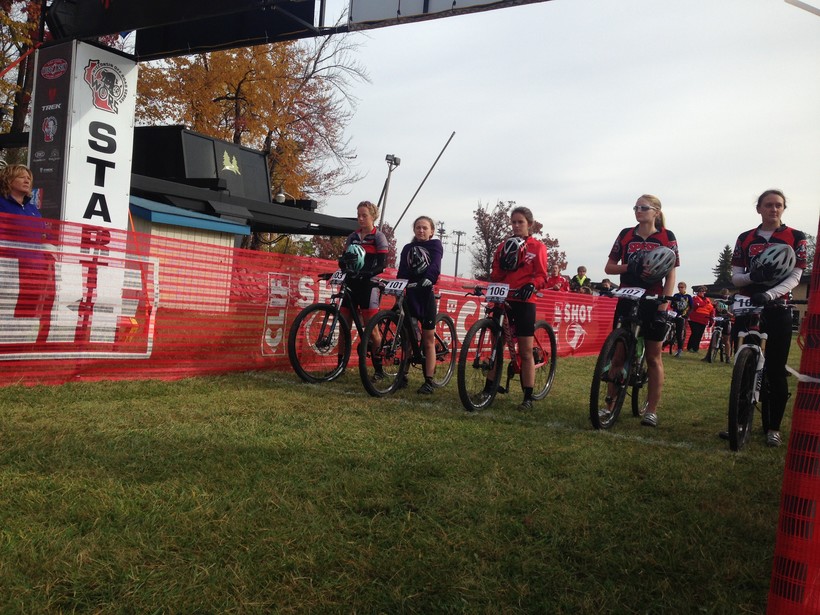 Only 11 Other States Give Students The Opportunity To Participate In The Physically Demanding Outdoor Sport
By Laurel White
Share:

On a brisk mid-October day in Portage, around two dozen athletes gathered for the last race of the first season of the mountain biking season. There were 16 teams from locations all over the state, including Cedarburg, Janesville, Wausau and Mukwonago.

Kathy Mock was among those in attendance. Mock, whose son Dax was in the race, helped found the Wisconsin High School Cycling League and make Wisconsin the 12th state in the country to offer students the chance to compete in the adrenaline-heavy, demanding outdoor sport. She said that mountain biking is drawing a lot of interest because it's a sport that lets everyone play.

“The number one thing I would say — nobody sits in the bench,” she said.

It’s also a sport that some riders say lets them connect with the outdoors. Ava Miller, a 17-year-old rider from Shorewood, said that's definitely a draw for her.

“I just like being outside and on the trails,” said Miller.

In the lead-up to the race, Ava said that she had some jitters. Nevertheless, she had a good strategy to cope.

“I usually have songs going through my mind, to take it off how tired my legs are,” she said.

The races are competitive, but the atmosphere around the grounds was friendly. Riders were bundled up in puffy coats, their folding chairs pulled in tight next to each other. They laughed and ate sandwiches their parents brought.

Hanna Mork, age 15, and McKenna Dwyer, age 13, have gone back and forth all season, alternating between finishing first and second in the girls' JV races. They're fierce competitors, but they're also really good friends.

Mork and Dwyer caused a lot of commotion on the grounds around noon. People started jogging from the woods, where the riders were about to emerge to go down the home stretch. Then the whole crowd starting running toward the finish line. The reason soon became apparent: Dwyer and Mork were neck-and-neck in their race.

Dwyer later gave a recap of what happened.

“I was leading the first lap and (Mork) passed me at the single track back there, and then I just stayed on her wheel for the last two laps,” she said.

Said Mork: “Like, the whole third lap I was trying to shake her and she wouldn't drop and I was thinking, ‘Great, it's going to come down to the final sprint.’ And that got me scared because we raced here about a year ago and she got me in a sprint so I knew that it could be like that again. And when we turned that corner and we were all out sprinting it, and I could see I had a wheel on her ... so when I finished I was like, 'Wow.'”

Mork ended up winning by half a second.

Of the four races this season, Hanna won two and McKenna won two, putting the matter of who would receive the championship trophy into question. The two said that they’d talked about it, and had agreed that whatever ended up happening, they would share the trophy and title in spirit.

So ended the first season of the Wisconsin High School Cycling League. Organizers expect the league to grow next year. And McKenna and Hanna — as well as some of their teammates — are hoping to make it to nationals.

Until then, riders will train for next fall. And as they do, they may need some snow tires on those mountain bikes.