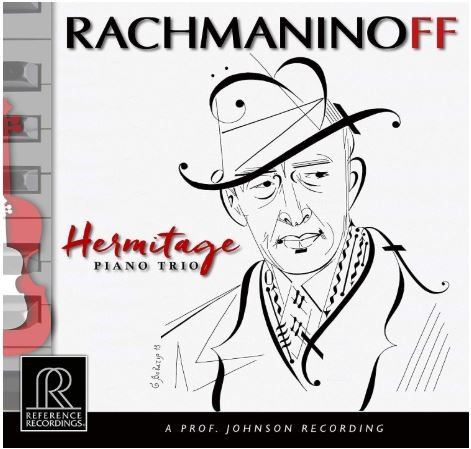 The first commercial release from the Hermitage Piano Trio is an all-Rachmaninoff recording that hits the trifecta: virtuoso performances, outstanding production quality, and a program overflowing with gorgeous music and deeply wrought emotion.

It includes two trios (Trio Élégiaque Nos. 1 and 2) and Rachmaninoff's hauntingly beautiful "Vocalise" in a transcription for piano trio by his friend and colleague, violinist Julius Conus.

The music provides a shimmering showcase for the young musicians, enabling them to display powerful technical and interpretive chops. The program itself is profoundly moving, including a youthful work, an elegy to Tchaikovsky after his death, and a gorgeous arrangement of the "Vocalise" that will be new to listeners. In the latter, the three instruments weave in and around each other in an intricate dance of the well-known melody.

Speaking of weaving, the Hermitage Piano Trio, with the support of superb engineering, weaves a magical soundscape — a spell that surrounds the listener, penetrates the listener, captivates and stirs the listener. It's art of the highest caliber.

The liner notes are particularly well written and informative, and the recording venue — Mechanics Hall in Worcester, Massachusetts — also plays a starring role.

The Hermitage Trio is made up of three acclaimed soloists in their own right: Misha Keylin, violin; Sergey Antonov, cello; and Ilya Kazantsev, piano. If this debut is any indication, there is much to look forward to from the ensemble.