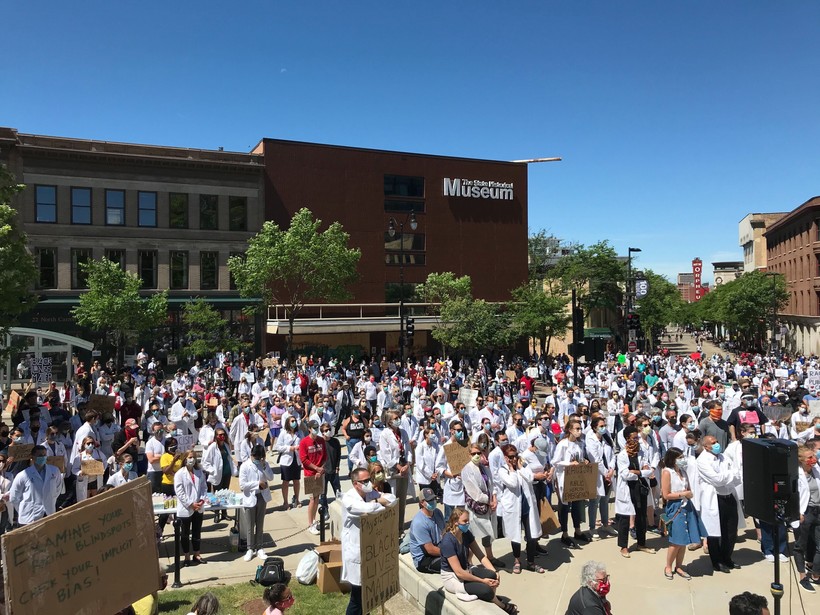 Health care providers gathered at the state Capitol on Saturday morning, June 13, 2020, to speak out against racism's impact on health care. Shamane Mills/WPR

Protests are continuing in Wisconsin this weekend, marking two weeks of public outcry against systemic racism and police violence following the death of George Floyd in Minneapolis last month.

Organizers said the event was a call for change "to end the public health crisis of racism in America."

Several protesters carried signs calling for increased access to health care, while speakers, dressed in white coats, spoke to the attendees about a range of concerns. They asked others to understand own implicit biases and lift voices of the black community to reduce racism in health care. 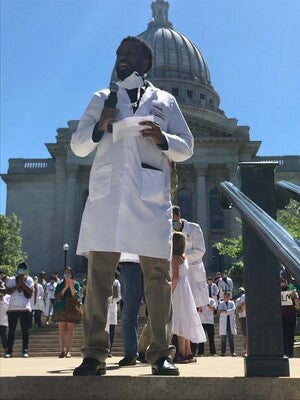 Dr. Patrick Lee, a third-year surgery resident, said he is the son of former police officer. Speaking at the event, he called for diversifying medicine and law enforcement.

He said most black boys have encounters with police by age 8, according to research. Recalling his own interactions with police, he said, "I'm not here to vilify police."

"COVID-19 has made so clear disparities in healthcare as we see more people of color dying from the disease," Feldstein said.

Dr. Jasmine Zapata told crowd the video of Floyd's death and the things that Floyd said to the Minneapolis police officer who put a knee on his neck resonated with many in the medical field.

"When he said he couldn’t breathe, every doctor heard him," she said.

Doctors speak out against death of George Floyd. Dr. Jasmine Zapata tells crowd “when he said he couldn’t breathe every doctor heard him” during #whitecoats4blacklives rally pic.twitter.com/sM9Cd0etDF

Rosalyn Johnson, 18, made signs for her mother — who is a doctor — and father, both of whom attended the rally. The sign contains all the names of black lives lost to police violence last 10 years.

Johnson said that she "felt like I needed to do more" after attending her first Madison rally. 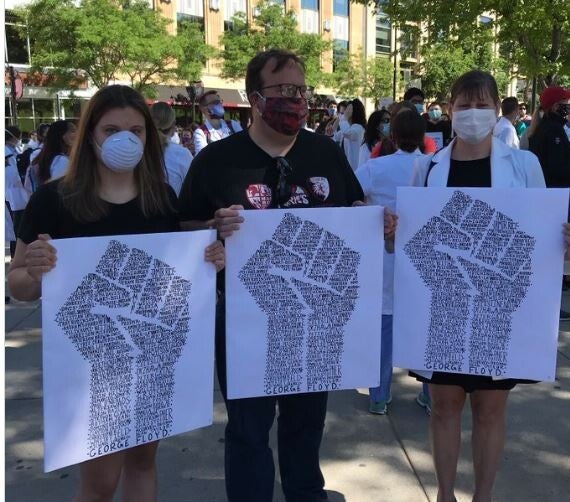 Rosalyn Johnson and her parents attended the rally at the state Capitol on Saturday morning, June 13, 2020. Shamane Mills/WPR

After hearing from speakers, protesters ended the event with a march around the State Capitol for 8 minutes and 46 seconds, representing how long former Minneapolis Police Officer Derek Chauvin’s knee was on Floyd’s neck before he died. Chauvin has been charged with second-degree murder.

In Milwaukee, protests and community events were scheduled around the city on Saturday.

Around a dozen artists gathered at Freedom Grocery in the Harambee neighborhood on Saturday morning to paint a mural of black leaders and activists, including Vel R. Phillips, Thurgood Marshall and Assata Shakur.

"I'm just hoping that people will be inspired. Most people walk around and they don't do as much as they can do, and I wanted to show my students, really, that you can get out there," Jones said. 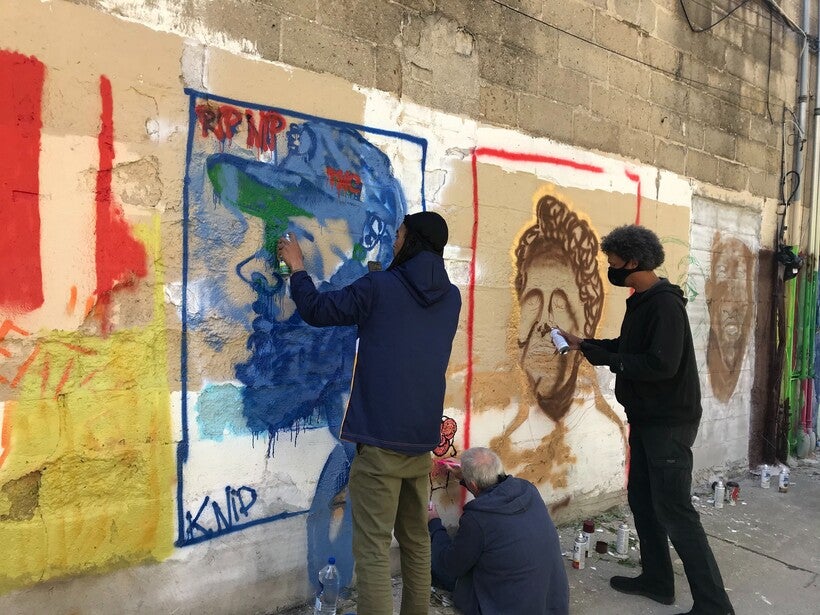 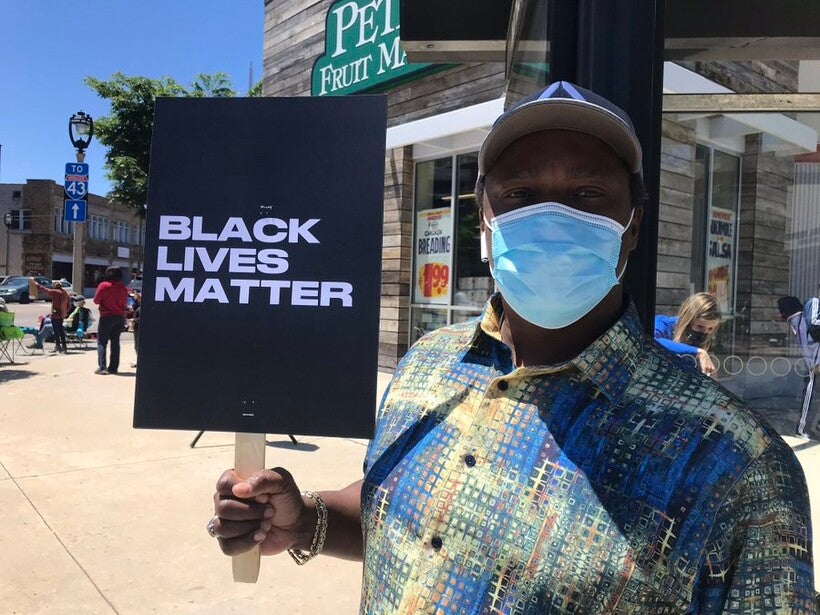 Terence Gage, 52, of Waukesha, was among those at a socially distanced protest in Milwaukee on June 13, 2020. Madeline Fox/WPR

Nearly 100 people gathered for a sit-in event at King Solomon Baptist Church on Saturday afternoon. Organizers said the demonstration was for those who aren't able to march or are concerned about COVID-19 because of their health.

Speaking at the event, the Rev. Greg Lewis, president of Pastors United and Souls to the Polls, said older members of the community wanted to show support for protestors and their concern over recent events.

"We want to make sure our young folks understand, just because we got a little age on us and we haven’t been out on the streets, doesn’t mean we don’t care," Lewis said.

Organizers played a recording of Martin Luther King Jr.'s 1968 speech, "I've Been to the Mountaintop."

Terry Wiggins, who is almost 70 years old, said the sit-in protest felt more accessible to her.

"I thought it was one I could do, as opposed to one that people are marching many, many miles ... I probably couldn’t keep up with the young people on long, long legs," Wiggins said.

Families and educators attended a "Wee Chalk Your Walk" event on Saturday afternoon, writing messages in support of the Black Lives Matter movement and black educators on neighborhood sidewalks in chalk.

Here’s one that says “Recruit and retain Black educators.” According to this 2019 UWM report, 4% of teachers were Black or Latinx, compared to 21% of students https://t.co/pvCSkDGPi5 pic.twitter.com/dX4JrEiEGN

A "No Justice, No Peace" protest had been scheduled to start at 1 p.m. at Carver Park. Another protest at the City of South Milwaukee Administration Building had been planned for 3 p.m.