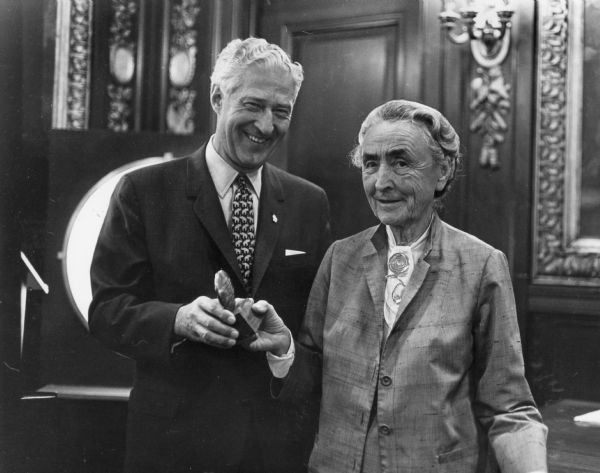 Gov. Warren Knowles, left, and Georgia O'Keefe at the presentation of the Wisconsin Governor's Award for Creativity in the Arts in 1966.

O'Keefe knew her artistic ambitions early. In 1899, she announced to a friend she was going to be an artist, though she wasn't sure where the idea came from.
"I only know that by that time it was definitely settled in my mind," she later wrote.

Natural forms inspired her from a young age. Trees, flowers, barns, landscapes, leaves and bones were recurring themes in her work – a life lived "in the country close to nature," art historian Charles C. Eldredge wrote.

O'Keeffe wasn't the only artist in the family. Her sisters, Catherine and Ida, were also artists, and the local teacher gave drawing lessons in their home where she was also a boarder. O'Keeffe later took lessons from a local watercolorist named Sara Mann.

O'Keefe's first formal art lessons came from Sister Angelique at Madison's Sacred Heart Academy in 1901. There she made a drawing of hands she remembered the Sister critiquing as being too small.

"I said to myself that I would never have that happen again. I would never, never draw anything too small," recalled O’Keeffe of that day.

Another lesson came from her high school art teacher who used flowers to teach about form and color.

Her parents believed strongly in women's education, and O'Keeffe studied at the School of the Art Institute of Chicago and then in New York City in the Art Students League. She became an art teacher and also experimented with various styles to find her artistic voice.

By the 1920s, O'Keeffe had become famous for her paintings of skyscrapers and flowers. She began visiting New Mexico in 1929 where she created some of her most iconic work.

Although she never returned to Wisconsin to live, O'Keeffe visited her family in Wisconsin and the state awarded her many honors. She received an honorary degree from the University of Wisconsin in 1942 and the Wisconsin Governor's Award for Creativity in the Arts in 1966, shown above.

Nearly Two-Thirds Of Wisconsin Counties Have A 'High Level' Of Coronavirus Activity
Evers Wants To Revive I-94 East-West Expansion
Ryder Cup, Set For Kohler, Postponed Until 2021 Amid Coronavirus Pandemic
Wisconsin Cities Getting $6.3M In Grants To Help With Elections During Pandemic
Support For Black-Owned Businesses Rises As Communities Respond To Protests, Pandemic
More WPR News