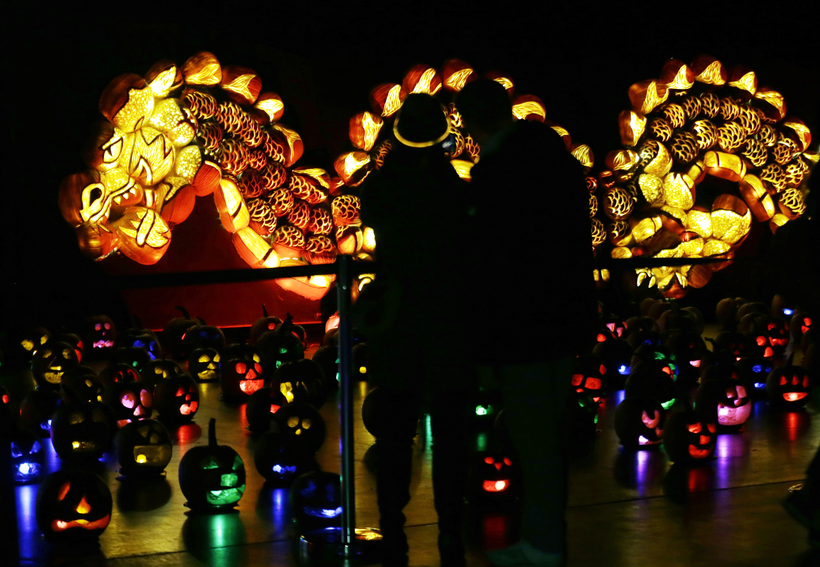 A couple stand together to view a lit dragon made of pumpkins at the Rise of the Jack O'Lanterns Show in Boston. Elise Amendola/AP Photo

Halloween Is Multi-Billion-Dollar Industry, Second Only To Christmas, Expert Says

On Halloween weekend, Wisconsin residents will seek out and pay for the opportunity to be scared out of their wits. And according to the Haunted House Association, a growing number of thrills are coming from professional haunted attractions.

Haunted attractions are places using Hollywood-level visual effects for the biggest and scariest impact. There are about 2,000 haunted attractions in the United States charging admission for screams and scares, according to the association.

Waunakee's Wisconsin Scaryland is one such attraction with nearly 20,000 square feet of indoor haunted area. It's also one of the largest in the Midwest.

Wisconsin Scaryland marketing manager Jeff Pertzborn said the site is an old meat-packing plant with twists and turns through spaces that were formerly used as a convenience store, gas station, office building and more.

"It's just a really fun playground for a person like me," Pertzborn said.

Halloween is a multi-billion dollar a year industry, second only to Christmas, Pertzborn said, and that means a great number of people are traveling through haunted houses for only a select few October weekends.

The Chicago Tribune reported spending on Halloween candy could have its strongest hike since 2011, with a potential increase of 5.5 percent and reaching 3.8 billion.

The NRF predicts 21 percent of Halloween celebrators will visit a haunted house. NRF surveyed 6,800 people for the survey.

You can locate a haunted house or attraction near you this weekend here.