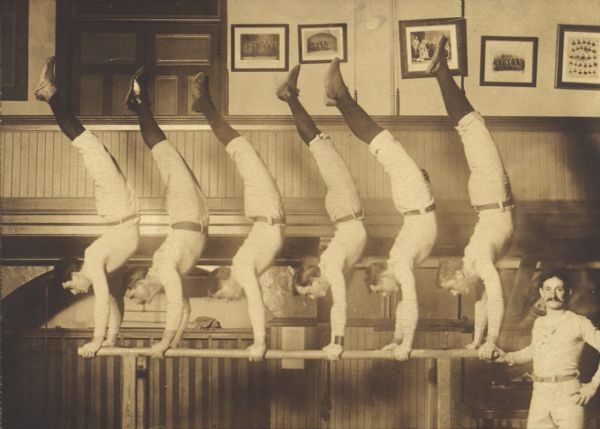 Gymnastics For Politics, Fitness And Community In Milwaukee's Turner Hall

Six men hold handstands on the parallel bars in the above image. They were members of the Milwaukee Turners, one of the oldest and largest gymnastic societies in the country, which organized this week in 1853.

The Turners (a name derived from the German word for gymnast) and their many local Turner halls were a somewhat distinct form of recreation in Wisconsin. The turnverein movement (turnverein means athletic club) had formed in Germany in the 1810s as an inconspicuous way to prepare young people, mentally and physically, to resist Napoleon. They later became powerful social and political organizations that used gymnastics as an inconspicuous form of training for military drills.

Turner societies came to the U.S. with German immigrants in the late 1840s. These German Turners in America endorsed gymnastics for physical fitness as an elemental part of education, encapsulated in their motto, "a sound mind in a sound body."

The Milwaukee Turners became central to the athletic, cultural and social lives of the city’s German population. In the 1880s, one in 12 residents of Milwaukee belonged to one of the city's eight Turner halls. Members volunteered in large numbers for the Union Army during the Civil War and became staunch advocates of abolition, suffrage, and socialism. They also did gymnastics, emphasizing the German system of using apparatus and drills. Both women and men participated.

In the 1880s, Turners around the country made the introduction of physical education in all American schools its primary goal. Milwaukee Turner and gymnastics instructor George Brosius introduced one of the first physical education programs in public schools, a program that later went on to influence fitness training of the U.S. Army.