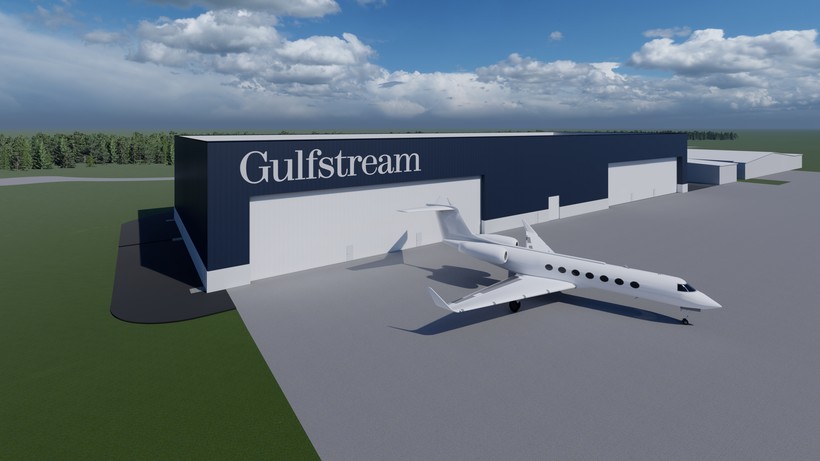 State-of-the-art aircraft paint facility on schedule to open in 2023
By Joe Schulz
Share:

An international aircraft producer is in the midst of a $55 million investment in the Fox Valley that could add 200 jobs to the community.

Gulfstream Aerospace Corp. is on schedule to open a new state-of-the-art aircraft paint hangar at Appleton International Airport in 2023, after breaking ground on the project earlier this year.

The company builds, designs, outfits and services business aircraft. In a statement, Gulfstream President Mark Burns said the new facility is part of a company-wide expansion that aims to address current demand and future growth potential.

"Investment in our Appleton facility is a key part of our overall strategy to provide our customers with industry leading completions and support worldwide," he said.

The 73,000-square-foot facility will paint about 48 aircraft per year. Currently, the company has to ship planes elsewhere to be painted after construction. But when planes aren’t ready to fly, it can cause delays in the entire process, according to Ira Berman, senior vice president of administration and general counsel for Gulfstream.

"Being able to have the paint hangar at the same facility at which the completion is being done is a big deal, operationally, because it eliminates that whole problem," Berman said. "You’re right there, so you can just tow the airplane to the paint hangar."

Berman said this is the company's third expansion at Appleton International Airport in three years. The company previously built a new maintenance facility, as well as renovated and expanded its completion facility, he noted.

"Appleton, quite obviously, is a place where we want to expand," Berman said.

He said Gulfstream's commitment to the Fox Valley stems from its local workforce and relationship with the airport.

"We have an absolutely fabulous workforce in Appleton. The quality of work is high, the level of customer service is high, people's attitudes are great (and) our customers love coming to Appleton," Berman said. "Appleton is an airport that wants us — the airport authority has been terrific to work with and the economic development authorities have been terrific to work with."

Appleton International Airport Director Abe Weber said the relationship between Gulfstream and the airport has developed over many years.

Outagamie County owns the airport, but it is not supported by tax funds, instead relying on rent from users for its revenue.

"As Gulfstream has grown and developed here, they've allowed us to generate additional revenue, which helps enhance our services back to the community of northeast Wisconsin," he said. "Gulfstream has been a phenomenal partner for the Appleton airport and Outagamie County."

That continued expansion, Weber says, has helped Gulfstream continue to grow its economic impact in Fox Valley as the company has added hundreds of jobs in the last few years.

"Those are high-wage, family-supporting jobs," he said. "One of the most important pieces for us is how do we, as an airport, help support them grow, and develop and support the greater northeast Wisconsin?"

Berman said the company hopes to continue to expand in Appleton, possibly by upgrading some of its older facilities.

"If you look at our facilities in Appleton, it's a mixture of new state-of-the-art facilities and some older facilities," he said. "The older facilities serve their purpose, but they don't represent the brand as well as the newer ones do. Obviously, our goal over the very, very long-term would be to upgrade everything."