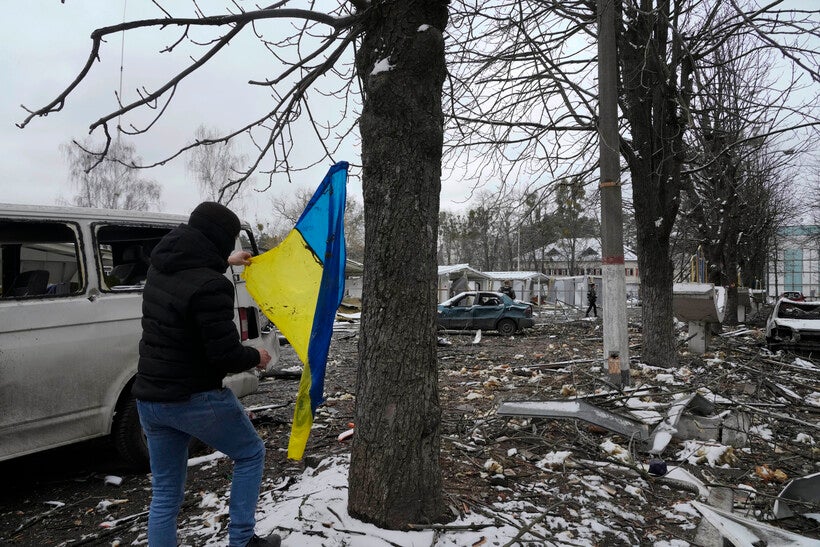 A man takes a Ukrainian national flag swinging from a tree as he walks near a destroyed accommodation building by a checkpoint in Brovary, outside Kyiv, Ukraine, Tuesday, March 1, 2022. Russian shelling pounded civilian targets in Ukraine's second-largest city Tuesday and a 40-mile convoy of tanks and other vehicles threatened the capital — tactics Ukraine's embattled president said were designed to force him into concessions in Europe's largest ground war in generations. Efrem Lukatsky/AP Photo

Businesses are working to help employees living in Ukraine
By Corrinne Hess
Share:

Numerous Wisconsin companies have closed their international facilities in Ukraine and Russia as the war and violence in Ukraine escalates.

The state's largest companies including SC Johnson, Johnson Controls and Harley-Davidson — are joining some of the world's best-known brands in pulling out of the countries following Russia’s invasion of Ukraine more than a week ago.

The United States and its allies have imposed wide-ranging sanctions against Russia. They’ve restricted Russia's access to its overseas currency reserves and barred many of its banks from SWIFT, a global network that financial firms use to conduct transactions.

Mary Lovely, a senior fellow at the Peterson Institute for International Economics in Washington, said companies were drawn to Russia to expand their footprint and bring products to Russians.

"And now, there is a huge exodus because companies are afraid they will not get paid and there is a genuine moral outrage over what is happening," Lovely said.

In Ukraine, there has been investment by American companies because of lower labor costs and its proximity to Poland and the Czech Republic, Lovely said.

With many American companies ceasing operations, Ukraine’s economy will be damaged, she said.

In an email to Wisconsin Public Radio, a spokesperson with Racine-based SC Johnson said operations in Ukraine are temporarily closed as the company continues to monitor the Russian invasion of Ukraine. The company would not say how many of its employees are in Ukraine.

"Our priority is the safety of the SC Johnson people and their families there, and to that end, we are taking a number of actions to support them in their time of great need," the statement reads.

Racine-based CNH Industrial, an agriculture machinery company that employs around 65,000, has 38 employees in Ukraine. On Friday, CNH announced it would donate $500,000 to support Ukrainians and establish a global fund for employees to donate to. The company will match all contributions.

"CNH Industrial strongly condemns any and all acts of unprovoked violence and aggression, which have led to the current lamentable situation in Ukraine," Scott Wine, CEO of CNH Industrial, said in a statement. "Our thoughts and prayers are with everyone affected, and we are prioritizing the safety of our employees and their families in the country."

Milwaukee-based Johnson Controls has locations in more than 2,000 countries, including Ukraine. In a statement posted Monday on LinkedIn, Johnson Controls Chair and CEO George Oliver called the "unthinkable situation" in Ukraine a momentous turning point not just for Europe but the world.

"We believe in non-violent ways to address differences and our desire is for peace, stability and safety for Ukraine and its people," Oliver wrote. "We will continue to investigate ways in which we can help and are supporting three key charities and organizations providing food, shelter and medical relief to those in, and fleeing, Ukraine."

Milwaukee-based ManpowerGroup sold its operations in Russia and Ukraine earlier this year, but the company operates in Poland. In a statement Friday to WPR, Manpower CEO and Chair Jonas Prising said they are "working very hard to support the many Ukrainian people who work at that location."

"We are continuing to run the day-to-day operations and honoring our commitments to clients in Central and Eastern Europe," Prising said. "Going forward we will be working with humanitarian organizations like Tent Partnership for Refugees to help those people displaced by these tragic events. Our people's safety and well-being is always our highest priority and we join with others calling for peace."