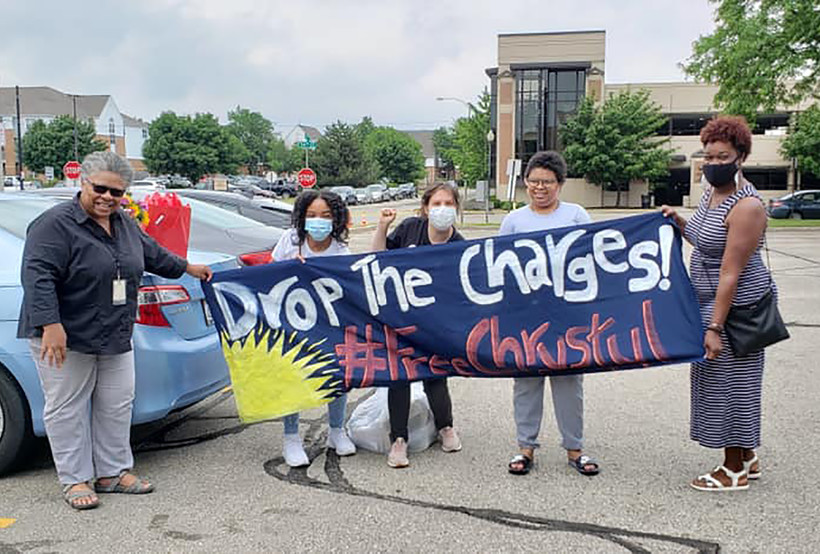 Supporters: Teen Charged In 2018 Killing Of Abuser Acted In Self Defense
By Laurel White
Share:

Teenaged sexual assault survivor Chrystul Kizer, who was charged in 2018 with the murder of her abuser, was released from Kenosha County Jail on Monday after a coalition of groups raised $400,000 for her bail.

Kizer, of Milwaukee, was incarcerated two years ago after shooting and killing Randall P. Volar, III, of Kenosha. Volar, who had previously been arrested on charges of child sexual assault, met Kizer when she was 16 years old, according to reporting by the Washington Post.

Kizer’s supporters argue she was unjustly held in jail because she was acting in self-defense. Prosecutors argue the killing was premeditated.

Sharlyn Grace, executive director of the Chicago Community Bond Fund, which worked with a coalition of groups to raise funds to pay Kizer’s bail, said Kizer’s case is an example of how the American criminal justice system fails Black women.

"We see these cases as incredibly important ... to protect and uplift and support the individual women, who are overwhelmingly Black women," Grace said. "Because the reality is that Chrystul Kizer was not kept safe by police and prosecution and incarceration and, in fact, after she was forced to defend herself and she chose to survive, she was then further harmed by those systems."

Grace said a surge in donations to her organization in the wake of George Floyd’s death in Minneapolis last month made it possible to pay Kizer’s bail.

"It was only because of the outpouring of support following the police murders of George Floyd and Breonna Taylor and so many other Black people in the United States that we were able to post a bond this large," she said.

Many bail fund organizations have channeled funds in recent weeks toward the release of protesters arrested at Black Lives Matter events across the country.

In a Facebook post, the Milwaukee Freedom Fund said Kizer’s case "deepens the current calls for justice and the need to keep fighting to transform our society."

"The better world protesters are struggling for is one that protects not punishes survivors," the post said.

Kizer’s case is ongoing. It is before a state appellate court and is scheduled for a status hearing this fall. There is an online petition, currently with more than 960,000 signatures, to drop the criminal charges against her.

"Obviously, various persons have limited facts because the case is still pending," Graveley said via email. "I’m just asking people to allow a jury to decide assuming they will have the full facts at their disposal."

According to a blog post by the Chicago Community Bond Fund, the returned bail money at the completion of Kizer’s case will be used to fund a national bail fund for survivors of domestic and sexual violence.