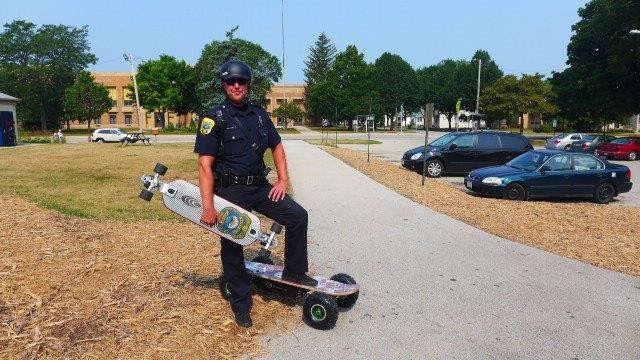 The Green Bay Police Department has a skateboarding officer who says he can patrol areas where squad cars can't -- both literally and figuratively.  At the same time, he's also helping boarders gain acceptance with city leaders.

One doesn't normally think of a police officer gliding down the sidewalk on a skateboard, and many are struck by the sight of Officer Joel Zwicky when he visited a Green Bay's skate park.

"It's funny but also it's cool," said one onlooker. "A cop is riding a skateboard!"

Zwicky has been pounding part of his beat on a type of skateboard called a longboard.  He said coasting around town makes him more accessible to younger people.

"We've always been told we've got to dress the same. We've almost got this Storm Trooper uniform.  We're all like clones," Zwicky said. "But each one of us has our own talents and experiences that we bring, and if we can start tapping into that and allowing officers to bring their own talents and passions to work so that they can use those to help relate and police those communities, I think we're going to be way ahead."

Weather permitting, Zwicky splits his time between driving a squad car and patrolling Green Bay's recreational trails and parts of town where skateboarding is allowed.

That includes the pavement outside of Shay Rockey's art gallery.

"It's out of the ordinary and it shows that a lot of teenagers, like a little bit younger than me, can approach him and be like, 'Oh, this guy has the same common interest that I do and I don't think he's all that bad.'  Because young teenagers look at cops like, 'Oh, I'm going to get in trouble,'" Rockey said.

Zwicky has worked with the City Council to allow skateboards on trails and is hoping to sway the council to loosen up regulations on where boarders can ride throughout the city.