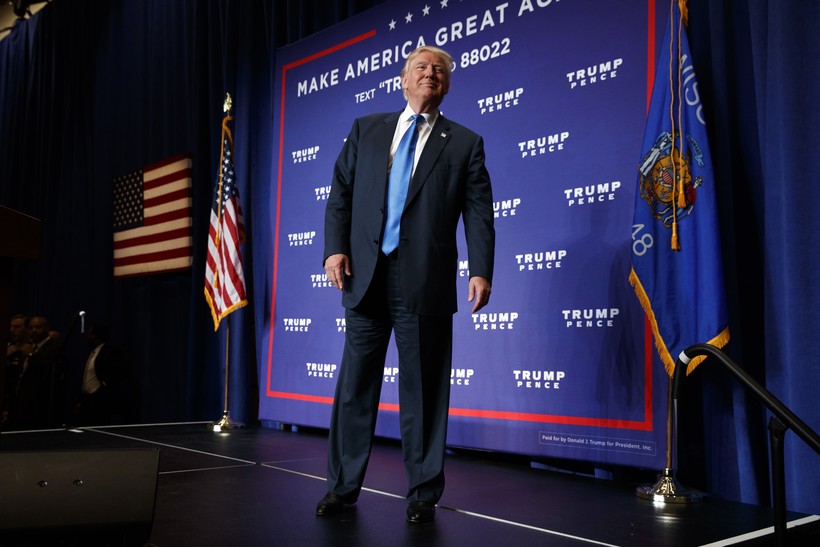 Trump watches as a demonstrator is removed during a campaign rally, Monday night in Green Bay.

In Green Bay, Trump Stands By Claim That Election Is 'Rigged'

Donald Trump used a campaign rally in Green Bay Monday night to vow he would "drain the swamp" in Washington D.C. if elected president.

Most of the Republican nominee's nearly hour long campaign speech  at the KI Convention Center focused on his Democratic opponent, Hillary Clinton's, emails from her time as head of the State Department.

Trump called for Under Secretary of State for Management Patrick Kennedy to resign because of communications between the State Department and the FBI regarding the classification status of some of Clinton's emails.

Trump told the crowd of several hundred, "the FBI documents that show Under Secretary of State Patrick Kennedy made the request for altering classification as part of a quid pro quo. In other words a deal."

Trump, who prides himself as being a deal maker continued by saying, "Under secretary Kennedy needs to resign."

Trump also outlined a campaign finance plan to limit foreign influence on American elections. It would also make government officials or members of Congress wait five years before they can become lobbyists.

Trump attacked  the media for focusing on his scandals regarding women, which he categorically denied, instead of on Clinton's emails and her family's charitable foundation.

He also reiterated claims that the Nov. 8 election will be fixed saying, "They even want to rig the election at the polling booths and believe me there's lot going on."

Trump claimed that votes are being cast in the names of dead people and by undocumented immigrants.

Milwaukee County Sheriff David Clarke also addressed the crowd and stood behind a controversial Tweet he sent this weekend. Clarke said, "it is pitchfork and torches time in America."

Trump was interrupted at least four times by people who appeared to be protestors.