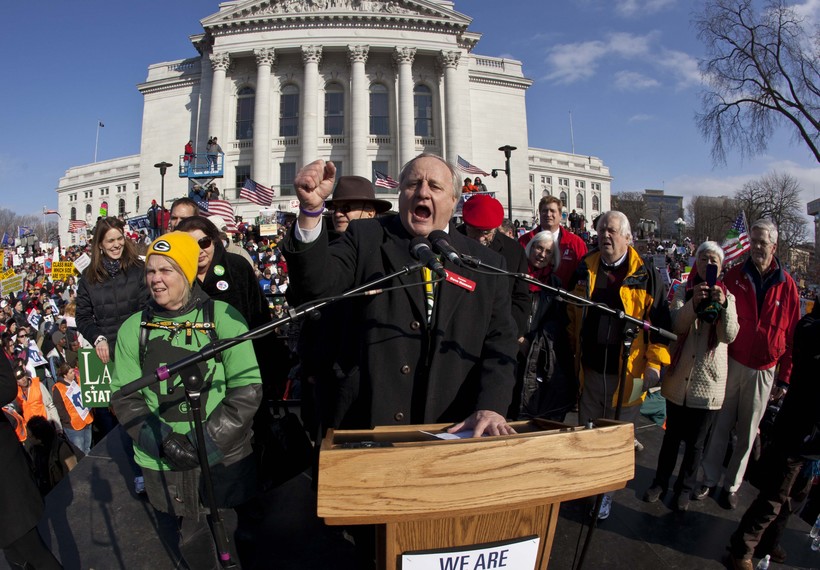 In this March 12, 2011 file photo, state Sen. Dave Hansen speaks at a rally outside the state Capitol in Madison. Morry Gash/AP Photo

State Sen. Dave Hansen, D-Green Bay, announced Thursday that he would not seek re-election this year, creating an open seat in a district that has grown more conservative over the past couple decades.

Hansen, who regularly outperformed other Democrats since winning the seat in 2000, said in a written statement that he was confident that he would have won again had he run, but he noted that he turned 72 in December.

"As much as it has become a cliché in politics, I truly am retiring to spend more time with my family," Hansen said. "I have no fears about my chances for re-election having survived an attempted recall in 2011 and winning handily in a district that Republicans told me they gerrymandered specifically to defeat me. I believe had I chosen to run again I would win."

Republicans currently hold a 19-14 majority in the Senate, which is more than enough to past most of their agenda but short of the two-thirds supermajority required to override a governor's veto. Democrats have said one of their goals this year is to prevent Republicans from winning the 22 seats they'd need to achieve that supermajority.

While both parties will compete for Hansen's seat, his retirement could put Democrats at a disadvantage. Trump won the district handily in 2016 even as Hansen also won his own race.

Hansen regularly emphasized his working-class roots as a member of the Legislature. He taught school and drove a garbage truck for the city of Green Bay, where he was a union steward for the Teamsters.

Hansen was one of the 14 Democratic senators who fled Wisconsin in 2011 to temporarily halt a vote on Gov. Scott Walker's Act 10. He survived a recall election later that year.

He remembers 2011 as a turning point for his time in the Senate.

"The first 10 years were really good, but after Gov. Walker got elected, it seemed like we were at each other's throats and it was always about the next election," Hansen said in an interview with WPR.

"I never set out to make this a 'career,' and have always had a great admiration for public servants who knew when to step back and let others pick up the torch," Kulp wrote in a Facebook post. "I have no doubt that the 69th District will continue to be represented by someone who reflects its values."

Kulp was first elected in 2013. His retirement is less likely to affect the partisan balance in the Assembly, partly because it's a strongly conservative district and partly because Republicans already hold a 63-36 seat majority in that chamber.