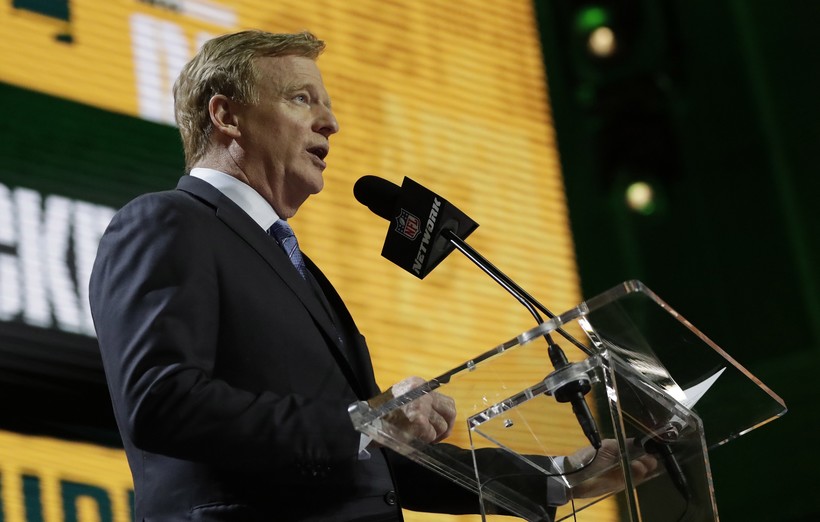 NFL Commissioner Roger Goodell announces that Rashan Gary of Michigan will be headed to the Green Bay Packers during the first round at the NFL football draft, Thursday, April 25th, 2019 in Nashville, Tenn.

Picks, Along With Free Agent Signings, Signal Team Is Serious About Strengthening Their Defense
By Hannah Haynes
Share:

The Green Bay Packers used their two first-round picks in the 2019 NFL Draft to beef up their defense for next season.

The Packers' first pick, Rashan Gary, was the highest-rated player in the country coming out of his high school class. He then played as a defensive end for the University of Michigan.

Gary, who has formed his own agency to represent athletes, is quick, strong and was a two-time All-Big Ten choice. He broke down in tears at home as he learned he was headed to Green Bay.

Packers scout Joe Hueber said in a press conference on Thursday that he'll start as an outside linebacker for the team.

"He's a guy who has had to play multiple positions and move around. So probably needs to learn some of the drop stuff, but I do think as far as rushing the passer goes he'll be ready," Hueber said.

The Packers traded with the Seattle Seahawks to move up higher in the draft order for their second first-round pick. With the 21st pick, Green Bay drafted safety Darnell Savage from Maryland.

Done deal with the @Packers. 🤝

Since Aaron Rodgers become quarterback, the Packers have now spent their first picks on defense in eight straight drafts. The only offensive player taken in one of the first three rounds in the past three years was tackle Jason Spriggs, the second-round selection in 2016 from Indiana.

During the draft, the broadcast cut to a shot of Stadium View Bar in Green Bay to show reaction from fans on the two draft picks.

No players from the University of Wisconsin were drafted in the first round of this year's draft.

The Packers' 2019 season starts with a game against the Chicago Bears on Sept. 5.