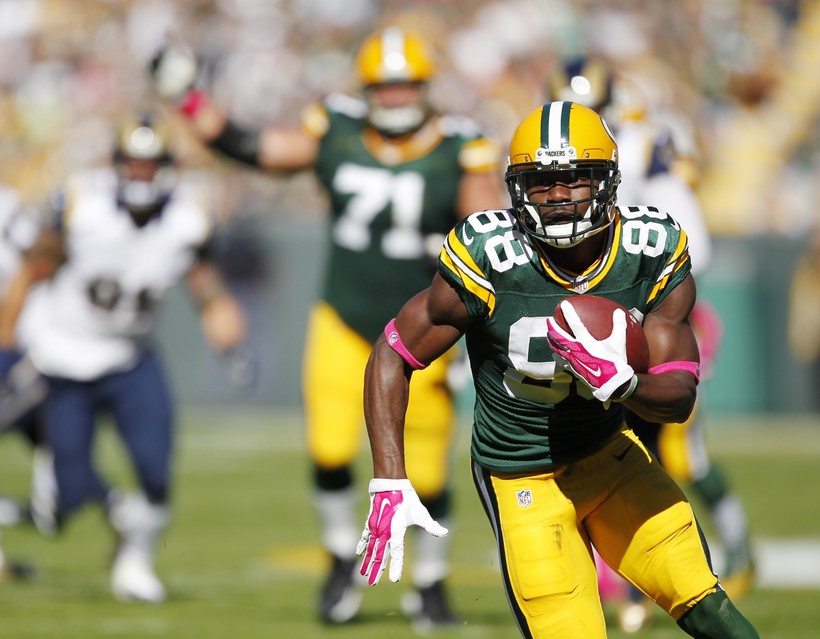 In this Oct. 11, 2015, file photo, Green Bay Packers' Ty Montgomery catches a touchdown pass during the first half an NFL football game against the St. Louis Rams in Green Bay. As a rookie in 2015, Montgomery had some success in a change-of-pace look out of the backfield before an ankle injury in Week 6 sidelined him for the season.

Sports Anchor: 'A Lot Of Teams In The NFL Are Scared To See The Green Bay Packers Coming Up In The Rearview Mirror'
By Maureen McCollum
Share:

Some Packers fans are still basking in the glory of Green Bay's defeat over the Seattle Seahawks last Sunday. The team looked strong and confident, as if things were once again clicking for the whole team. That’s following a rough patch midseason plagued with injuries and missed opportunities on the field.

The Packers have three regular season games remaining against NFC North rivals the Chicago Bears, Minnesota Vikings and Detroit Lions. It’s still up in the air whether they’ll make the playoffs.

"(The Packers) are heading into this super tough stretch and it’s a stretch they really need to win," said TMJ4 main sports anchor and the Mike McCarthy Show co-host Lance Allan.

"(They) have a shot against the Bears and the Vikings and they need to be within one game of the Lions at the end of the year. They’ve already beat the Lions once and if you’re a game behind and you win that game in Detroit, you tie the Lions. But then, you win by virtue of the head to head record and you get into the playoffs," Allan said.

But Allan said the Packers can rise to the occasion when they have to. Just look at their performance last week against Seattle.

"With a Mike McCarthy-led Packers team, this is where they’re at their best," Allan said. "It's amazing that the last two losses the Seahawks have had double digits or more, was at the hands of the Packers."

"This was the Seahawks worst loss in five years. A lot of the players I talked to in the locker room know the Seahawks can be a little chippy," he said. "They hit toward the edge of the whistle, even if a bit beyond the whistle and the Packers weren’t going to take it. They stood up to it and played their own game."

The win follows a less than stellar performance earlier in the season, when some fans started questioning whether it was time for head coach Mike McCarthy to go.

"I guarantee you if the Packers ever decided to part ways with him, he would be unemployed all of five minutes," said Allan. "I guarantee you 8-10 teams would line up for his services. Everyone has stretches … But I think now they've hit on something and it would be a shame if one of the hottest teams didn’t make the playoffs."

Allan added, "I guarantee you there are a lot of teams in the NFL that are scared to see the Green Bay Packers coming up in the rearview mirror."

The Packers have had a rough season plagued by injuries. Some players, like running back Eddie Lacy and cornerback Sam Shields, are out for the season. At times, their absence has had a major impact on the team’s success. Other players have been touch and go following injuries and surgeries, like wide receiver Jordy Nelson, running back James Starks, and tight end Jared Cook. It’s obvious that other players, like wide receiver Randall Cobb, guard TJ Lang, and quarterback Aaron Rodgers, are playing despite their injuries.

But the team makes adjustments and continues to reinvent itself. Take Ty Montgomery. He was a wide receiver and has shifted into a running back position.

Allan said after all the adjustments, the Packers' offense started to find their footing a few weeks ago. Now, we’re seeing it in the defense.

"The defense has played really well," Allan said. "They’ve allowed 13 — 13 and 10 points in the last three games. In the current state of the NFL, that’s about as good as you can get. That’s impressive after the defense got shredded about a month ago."

Going into the final games of the season, Allan said the team is just as prepared mentally as they are physically.

"You can tell being in that locker room that they’re now oozing with confidence," Allan said. "They beat an archrival in Seattle. They won three games in a row. Aaron Rodgers made the statement 'We can run the table' when they were 4-6."

"A lot of people thought he was crazy, but he’s the R-E-L-A-X guy and now they’re running the table and possibly going 10-6. They still have to take care of business otherwise all of this is moot."

The Packers play the Chicago Bears at noon on Sunday at Soldier Field. The Packers are currently 7-6 and the Bears are 3-10.