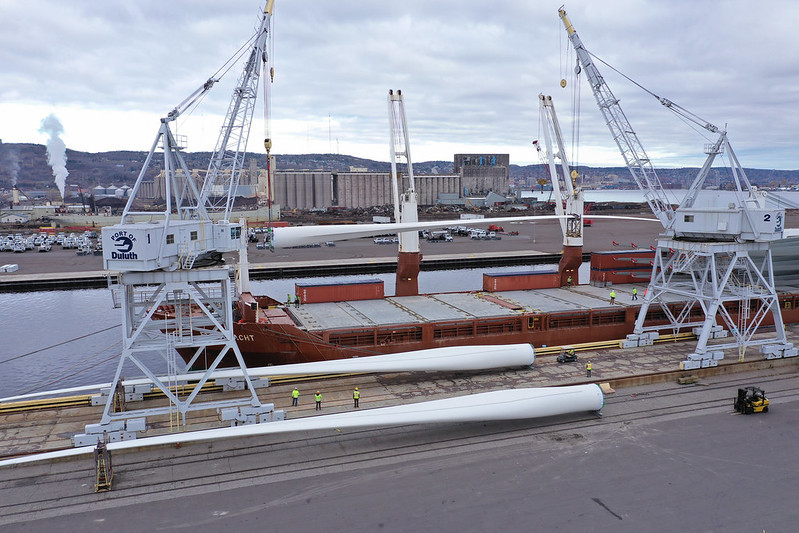 Wind cargo imports to the Twin Ports are 9 percent ahead of the same time last year, according to the Duluth Seaway Port Authority. Dennis O'Hara/Chamber of Marine Commerce

Great Lakes ports are on pace to handle more cargo this year while shipments are down on the St. Lawrence Seaway so far this year.

Construction activity is boosting growth in shipments of cement, stone and other products for Great Lakes ports in the United States, said Bruce Burrows, president of the binational marine industry association Chamber of Marine Commerce.

The Twin Ports closed in on roughly 24 million tons of cargo shipped through the end of September, said Jayson Hron, director of communications and marketing with the Duluth Seaway Port Authority. He said that's slightly ahead of last year's pace and the five-year average. The port is seeing a 9 percent growth in wind energy cargo over the same time last year, with 20 shipments so far this year.

He said they're handling more cargo in every category except iron ore, which is down about 1 percent to roughly 13.8 million tons through last month.

"Last year's pace in iron ore was a 23-season high so no shame in being 1 percentage point behind that," said Hron.

The St. Lawrence Seaway moved 24.8 million metric tons, which is a 6 percent decline from last year. Burrows highlighted difficulties with high water on the Seaway that prompted delays, as well as delayed grain harvests from wet weather and softening demand for steel. Aluminum shipments from Canada to the U.S. that are used in the automotive industry have picked up after trade tariffs were lifted earlier this year.

"The U.S. tariff is off for Canadian steel, but it's not off at least for European steel and so imports were down from Europe and that's certainly impacting the Seaway as well," said Burrows.

Even so, Port Milwaukee is reporting steel shipments from Europe are up 22 percent with about 130,000 tons handled so far this year, according to port director Adam Schlicht. Despite the tariff environment, he said the efficiency the port provides through multimodal transportation makes it attractive to European exporters. Overall, the port has handled more than 1.6 million tons to date, which is up 25 percent from the same time last year.

"If we stay on track, we could see anywhere between a 10 and 20 percent increase, making 2019 one of the best and economically productive years in Port Milwaukee's recent history," said Schlicht.

Schlicht said cement and limestone shipments are also up this year, as well as a 48 percent increase in salt heading into the winter months. The Port of Green Bay is also seeing an increase in limestone and salt, with more than 1.6 million tons of cargo shipped through the port overall through September.

Haen said they've also seen more volume at the port as ships have been able to carry more cargo due to high water levels. Overall, he expects the port to handle around 15 to 25 percent more cargo than last year by the end of the shipping season.