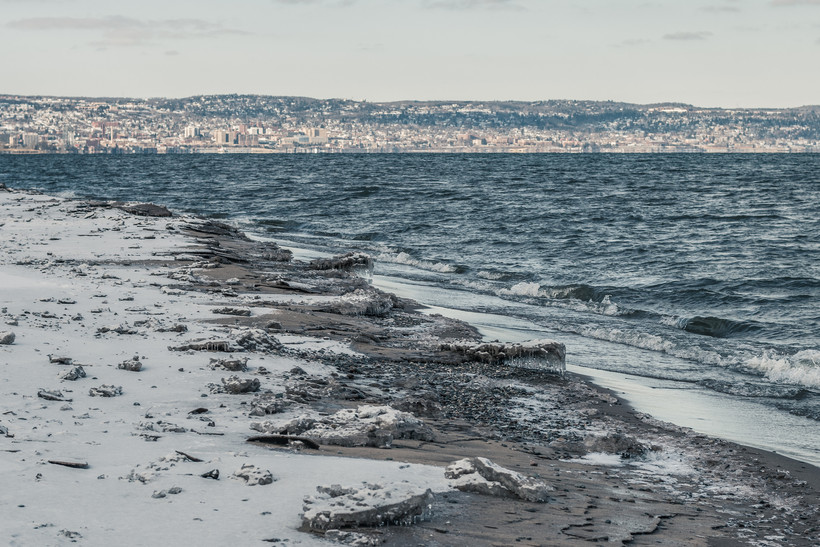 Less Than 10 Percent Of The Great Lakes Covered In Ice
By Danielle Kaeding
Share:

The Midwest may be in the throes of winter, but most of the Great Lakes are open water.

Right now, roughly 10 percent of the combined surface of the Great Lakes is covered in ice, according to George Leshkevich, research physical scientist for the Great Lakes Environmental Research Lab with the National Oceanic and Atmospheric Administration.

The Great Lakes have been experiencing a downward trend in ice cover since 1973, according to Leshkevich.

"And it seems like the variability from year to year is becoming greater," he said.

Leshkevich said it’s a far cry from the polar vortex in 2014 that caused a delay in the shipping season and cost millions of dollars in repairs for the shipping industry.

At most, only 34 percent of the Great Lakes were covered in ice last year, which was a strong El Nino year, Leshkevich said. From 1973 to 2016, the average maximum ice cover on the lakes was 55 percent. But, Leshkevich said the lakes have seen mostly below average ice cover since 1998.

The offshore Lake Superior town of Madeline Island began to feel the impacts of less ice cover around that time. In 1998, the Madeline Island Ferry ran all winter long carrying residents from the island to Bayfield on the mainland.

The ferry typically shuts down in the winter months when the ice road forms between the island and Bayfield. Mike Radtke, ferry operations manager, said the ice road isn't likely to form this year. If so, Radtke said it’ll be their sixth year-round season in the last 17 years.

"There may be a wind sled operation for a short period of time, but, at this point, it doesn’t look like we’ll have much of a break," Radtke said.

Without the ice road, Radtke said they don’t have the same down time to conduct maintenance.

"We’ll, of course, do the maintenance regardless," he said. "But, I think the bigger issue is the ice road. It’s kind of the rhythm of living up here. Those people who live on Madeline Island, they look forward to that road coming in and the freedom that it provides them that short time of the entire year."

Radtke said it could be the second year in a row where they haven’t shut down the ferry line. He said that’s never happened in the company’s history.

In 2007, Bayfield’s Forrest Howk discovered the ice road was open about 45 fewer days in the last 150 years.