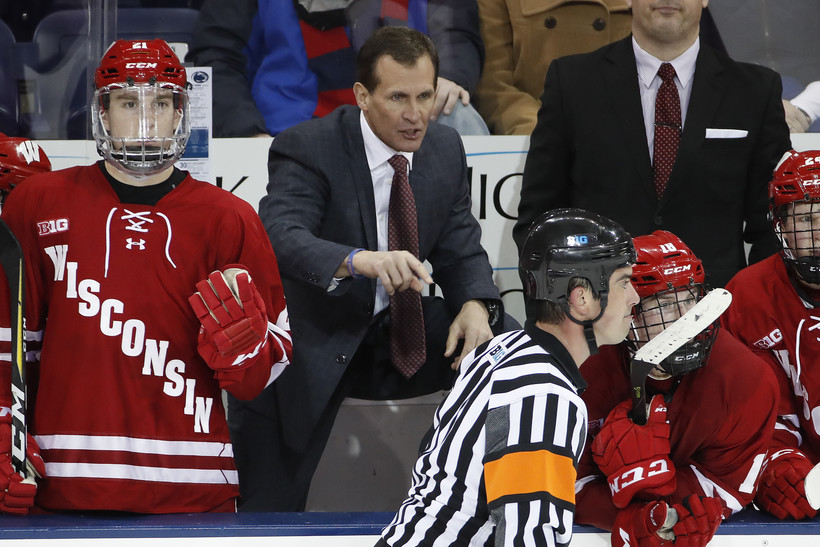 Wisconsin Olympic watchers will see a familiar face leading U.S. Olympic men's ice hockey team this year: Tony Granato. He's the head coach of the Wisconsin Badgers Men's Hockey team, but for the next several weeks he'll be fighting for gold in Pyeongchang.

The two gigs have some big differences.

At the University of Wisconsin-Madison, the players Granato coaches play together as a unit all season long.

At the Olympics, players may not know each other that well — and only have a short time to gel as a unit.

Granato said there was an additional challenge this year: NHL players aren't taking part in the Games.

Brady Carlson: In some ways turning a group of players into an Olympic team is the same as past years, but in other ways this is new territory.

Tony Granato: We took players from three different leagues. We've got collegiate players playing. We also have players that are playing in minor league hockey that were not on NHL contracts. The majority of our team is made up of professional players that are Americans playing in the European leagues.

The evaluation process was a little bit different, because we were evaluating in three different leagues, but I think we've put together a team that will be very exciting, that will be very competitive in the Olympics. We think the team we've put together can compete with any team in the world. Our expectations are to get off to a good start, and when you play in a tournament like this, you've got to realize that you've just got to get better as the tournament goes on. You win six games and you can win a gold medal in the Olympics.

It comes fast — I think the preparation leading up to the tournament is important. But I know we've got a group of players that the American people will be excited to watch, and be proud of when it's all said and done. BC: You've been juggling this role with your day job at the University of Wisconsin, what goes into the effort to keep Badgers hockey moving forward even as you're coaching Team USA in South Korea?

TG: Just like anything else, it's budgeting your time and using it wisely. I'm trying to put as much as I need to into my college job, getting our team going and our program running in the right direction. But when I have my free time it's spent on the phone, it's on the computer evaluating different players, it's spent communicating with the other coaches and staff members, trying to get ready.

I think it's just using your time wisely, being effective and efficient. Last year it was juggling school and coaching as well — I had to go back and get 15 credits last year to finish my degree. That actually helped me get ready for this year, taking on the two jobs. But it's actually worked out very well. I've got two great associate coaches (in Madison), Mark Strobel and Mark Osiecki. Those guys do such a heck of a job on helping our team get ready, it gives me the freedom that when I need to get something done for USA Hockey I have time to do so.

BC: In addition to coaching, you played in the 1988 Olympics. Do you have a favorite memory from the Winter Games?

TG: Yeah, I do, but it wasn't in 1988. It was in '98, when my sister played. I got a chance to play in the 1988 Olympics. We had a phenomenal team — we had Brian Leetch, Mike Richter, Craig Janney, Jeff Norton, Kevin Stevens. We had a bunch of players that had gone on and had great NHL careers. Scott Young's another one; he's on our coaching staff this year as well.

We didn't quite fare as well as we thought we would. We lost two tough games, one to Russia — we were down 6-5 in the last minute and Brian Leetch hit the crossbar for a chance to tie it. We ended up losing that game to probably the greatest Russian team ever put together. And we lost a tough game to a Czech team that beat us with a late shorthanded goal. So we fell out of medal competition. But it was a great team, it was a great experience.

What I was referring to in 1998, my sister was part of the first-ever women's USA hockey team. She won the gold medal and was captain of that team, and I got to see that. That was the greatest thrill that I've ever had from an Olympic experience, to see your sister on the ice getting the gold medal put over her head. I thought that was one special moment that I will never forget.