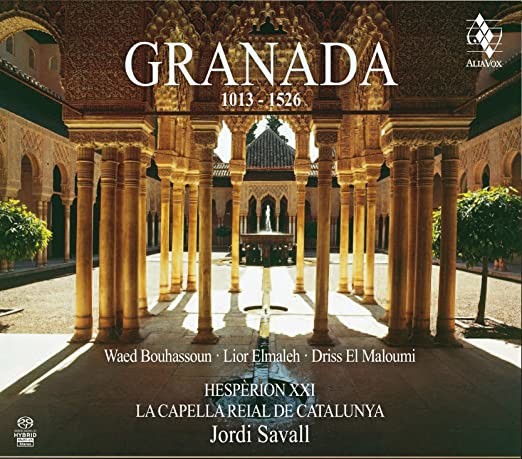 From the introduction of this 2016 recording:

"On this moving portrait of Granada, Jordi Savall leads Hespérion XXI and La Capella Reial de Catalunya in an exploration of 500 years of Spanish history. Granada is a symbol, like no other, of the fruitful but conflictual encounter of the three monotheistic religions. The succession of the zirid, almoravid, almohad and nasrid dynasties, their relationship with the neighboring Christian kingdoms and the often precarious situation of the Jews (the first inhabitants of this area) are reflected in this wide musical fresco, in which each culture displays its most advanced refinement."

From time to time I've listened to this recording, though only in passing and without the benefit of background silence. These trying times have caused me to slow down and pace myself and that is a good thing because now I can listen intently to every nuance of a piece of recorded music.  This music of Granada requires purposeful engagement, a quieted spirit, and an attentive 'ear' to what is an audible journey into the land of what some might find inaccessible. That is certainly not case here.

In fact, the two CD gives Jordi Savall and company the opportunity to bring the journey to the listener. Moreover, the well-researched booklet offers detailed scholarship on the musical relationship of Arab music on the cultural landscape of Spain and the musical universalisms explored by Muslim, Jewish and Christians. A solid addition to consider for your world music library.