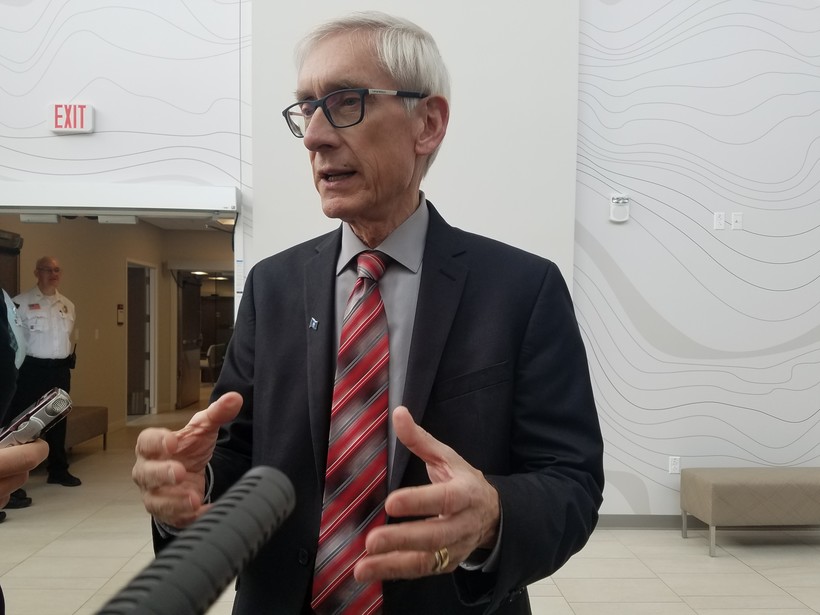 Wisconsin Governor Tony Evers speaks with reporters at Marshfield Clinic-Eau Claire Center on Wednesday, Jan. 23, 2019, a day after delivering his first State of the State address. Evers doubled down on calls to expand Medicaid in Wisconsin and leave a federal lawsuit seeking to block the Affordable Care Act. Rich Kremer/WPR

Governor Doubles Down On Calls To Withdraw From ACA Lawsuit, Expand Medicaid Coverage 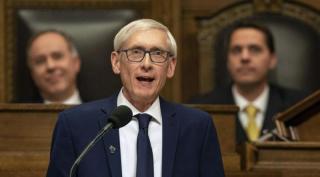 Gov. Tony Evers is touring the state a day after giving his first State of the State address, saying it's part of an effort to "rally the troops" to convince members of the Republican-controlled state Legislature to accept federal Medicaid expansion funding and allow the state to withdraw from a federal lawsuit challenging the Affordable Care Act.

Evers doubled down on his directive to Attorney General Josh Kaul on Tuesday to pull the state out of the ACA lawsuit.

A law passed by Republicans in a lame-duck session gives the authority to leave the lawsuit to the GOP-controlled Joint Committee on Finance, not the governor. When asked how Kaul can accomplish what the governor wants in the wake of the recent legislation, Evers was vague.

Evers said pulling out of the lawsuit would be consistent with legislation passed Tuesday by the state Assembly ensuring residents with pre-existing conditions won’t be denied insurance coverage.

"It’s inconceivable for us to be spending a whole bunch of time internally in this state figuring out how we protect pre-existing conditions and then on the other end spending money to get rid of them," Evers said.

Kaul said Tuesday he intends to respond quickly to Evers’ request and will take action "consistent with the law." He didn't elaborate on how what specific actions he may take. A request to Kaul's office for details Wednesday was not immediately returned.

Republican lawmakers were quick to condemn Evers’ directive on the ACA lawsuit. Assistant Majority Leader Jim Steineke, R-Kaukauna, told WPR on Tuesday that Kaul can't do so without the Legislature’s approval.

"Gov. Evers can't direct him to do this without violating the law," Steineke said.

On Wednesday, a new legal analysis from an attorney who works for the Wisconsin Legislature said Evers can't order Kaul to withdraw from the lawsuit.

The memo from a Legislative Reference Bureau attorney was sent Wednesday to Republican Senate Majority Leader Scott Fitzgerald, of Juneau.

The memo affirms only the Joint Committee on Finance can discontinue a lawsuit.

In Eau Claire, Evers also followed up on his intentions of accepting federal funds to expand the state’s Medicaid coverage — another point of contention between Evers and Republican lawmakers.

Evers said while political positions on the matter are "seemingly in cement," he’s confident residents will push legislative leaders to approve the expansion.

"Those are the people that vote in this state and the people of Wisconsin voted last November to do that," Evers said. "So, we’re going to rally the troops across the state. This is an important issue for us, monetarily and health care wise, and I think if state legislators hear from their voters, I think there can be some change."

Fitzgerald said in December the GOP-controlled Senate could be open to expanding Medicaid in Wisconsin.

"I don't see it (happening) right now, but there’s a lot of moving parts, so I don’t want to be presumptuous and say it’s completely ruled out," Fitzgerald said.

Assembly Speaker Robin Vos, R-Rochester, though, has said this month there is no "coverage gap" in Wisconsin because residents who aren't eligible for the state’s Medicaid program, BadgerCare, can get subsidized private insurance coverage on the federal ACA marketplace.

"So, I think its a good balance," he said. "I see no reason to change it, especially when national groups recognize us for where we are. And I certainly wouldn't want to upset the applecart."

During Tuesday’s stops in Eau Claire, Evers also disagreed with complaints from Republican lawmakers about him not talking more positively about the state’s economy and the 3-percent unemployment rate. Evers said he mentioned in his speech that unemployment was low, but that while individuals may be employed, some still have trouble making ends meet.

"The idea that if we have a 3-percent unemployment rate, we have to say, 'Phew, we don’t have anything to do here,' Evers said. "That’s wrong."