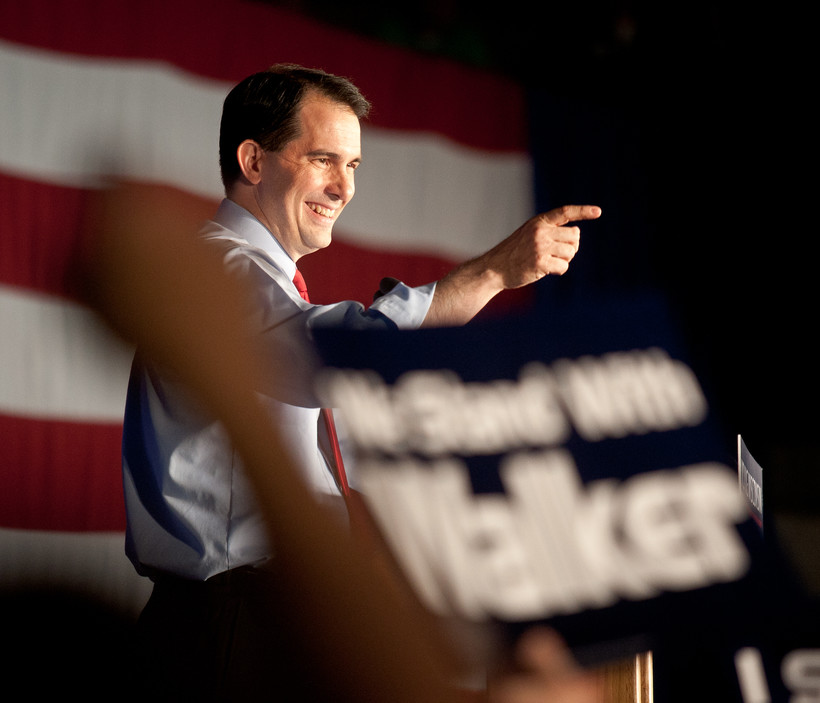 Republican Scott Walker became the third governor in U.S. history to face a recall last night, and the first ever to retain his seat in such an election, defeating Democrat Tom Barrett by an even wider margin than when the two first met in 2010.

With nearly all of the vote counted, Walker defeated Barrett by a 53-46 percent margin. Both candidates surpassed their 2010 vote totals but it was Walker who ran them up more.

With all eyes on Wisconsin, Walker's victory speech in Waukesha was broadcast far and wide. Walker—the son of a preacher—made frequent reference to his religious faith, opening his speech by saying, “I want to thank God for his abundant grace.”

The governor also used the spotlight to paint himself as a national and even a world figure, “Tonight, we tell Wisconsin, we tell our country and we tell people all across the globe that voters really do want leaders who stand up and make the tough decisions.”

Walker said now that the election was over, people in the divided state of Wisconsin were no longer opponents. He said it would take time to bring the state back together but he wanted to start right away: “In fact, next week I'm going to invite all the members of the state legislature, Republicans and Democrats alike. And what better way to bring people together than to invite them over for some brats and some burgers, right? And maybe a little bit of good Wisconsin beer as well.”

In Milwaukee, Mayor Tom Barrett gave a speech his crowd wasn't ready to hear, just after conceding to Walker: “I just got off the phone and congratulated him on his victory here tonight.”

For Barrett, it was a third unsuccessful run for governor. He improved his showing in Dane and Milwaukee Counties, but this was not the presidential-level turnout that Democrats were hoping for. It also wasn't the storybook ending they'd hoped for given the massive protests and historic signature drive that forced the recall. Barrett told Democrats not to be discouraged: “To those of you who fought, who obtained signatures, who stood out in the cold, who did what you thought was right, never ever stop doing what you think is right. That's what makes this such a great country.”

There was one bright spot for Democrats last night that would ordinarily have been larger news were it not overshadowed by Walker's historic victory. Racine Democrat John Lehman defeated incumbent Republican Sen. Van Waanggard in the 21st state Senate district recall race; Democrats are now in the majority in the Wisconsin state Senate.  The 17-16 seat Democratic majority checks Walker's power for at least the rest of this year. Lehman says that's a good thing: “I really believe that a divided legislature often moves toward reasonableness. And that what we would hope to see is leadership in both houses get together and say what can we do for the people of Wisconsin without arguing and without throwing rocks at one another. I look forward to that, I look forward to trying to help that.”

Whether or not that eventually happens, there was little evidence of both sides coming together last night. Democrats were shocked. At the Barrett campaign headquarters, Christine O'Meally feared for the worst with Walker surviving the recall, “I see him becoming even more reactionary in his policies. I see him taking even more liberties with our civil liberties. I believe he'll feel that he has political capital to do whatever he wants.”

Edwanike Harbour was in downtown Madison when the results came in Tuesday night. She had a hard time believing the results given Walker's record, “Oh, I'm accepting it, but I'm flabbergasted. I don't understand how a person could consciously vote for a person like that. I really can't.”

Likewise, Republicans were not ready to start healing. State Republican Party Vice-Chair Brian Schimming was busy celebrating the Walker win, and in the process, taunting Democrats, “This is a massive, massive, epic fail by the Democrats in Wisconsin.”

As Lori Reinders of Wauwatosa emerged from her polling place Tuesday, she said the entire recall made her angry, “The whole election thing. Doing it all over again. That pissed me off, and I wanted to be heard.”

Gov. Walker will tour a steel plant and hold a cabinet meeting Wednesday as he emerges from the recall campaign. His next election is now two full years away.

But election season continues in Wisconsin where a heated Republican primary for U.S. Senate is coming up in August and races for the state legislature, Congress and the presidency are on the ballot in November.