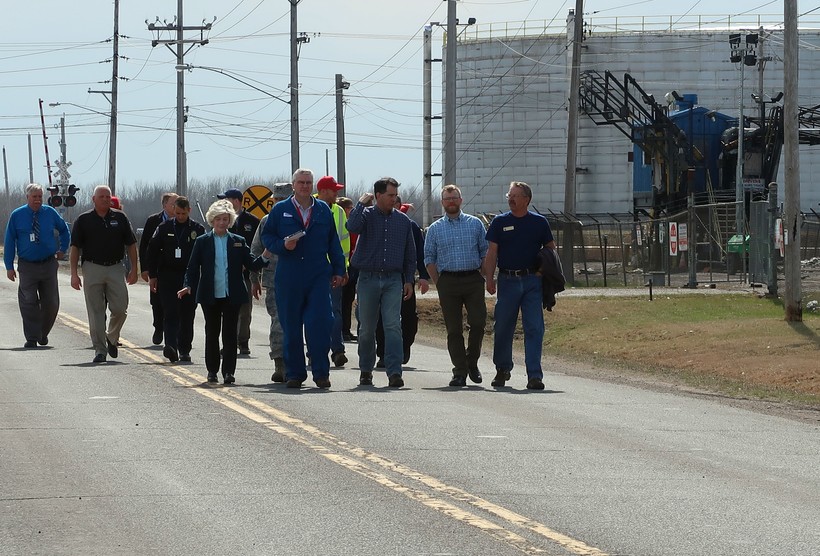 Gov.  Scott Walker toured the damaged Husky Energy refinery Monday. Walker commended company, local, state and federal officials for their responses to the fire. He said it's an incredible success there was no loss of life during the catastrophic explosion.

Walker said their number one priority is safety and making sure air quality continues to improve. The Wisconsin Department of Natural Resources is monitoring air, surface water and runoff issues. Walker said the company is committed to making things right.

"The commitment they have, not only to the cleanup, but to being here and continuing to stay here, and, if anything, probably expanding employment just in terms of working with all that needs to be done here," Walker said.

Kollin Schade, the refinery manager, was at the press conference with Walker. He said the refinery has been a part of the community for 60 years and plans to continue operations. The use of hydrogen flouride at the refinery prompted the evacuation last week. The highly toxic chemical can be fatal if released.

When Schade was asked if the refinery would shift to a hydrogen fluoride alternative, he said the company would explore new technologies and different types of configurations.

"Right now, certainly as everybody alluded to, our main concern is to try to understand exactly what happened here, get a very thorough investigation, work very closely with the EPA, all the federal and local regulatory agencies and make sure we really know what's happening," he said. "Right now, that's our true priority."

Schade said the refinery is fairly secure and investigators are already gathering evidence at the refinery. He said they will begin cleanup and repairs once agencies finish their work. Shade said it's unknown how long they will take, but it's unlikely the refinery will be back in operation within a month.

Superior Mayor Jim Paine said company, local, state and federal officials need to work together on the cleanup "to make sure that this refinery comes out better than when it went into the emergency."

At least 20 people were treated for injuries in last week's incident, but all are reported to have been released or be in good condition. The refinery employs 181 workers.