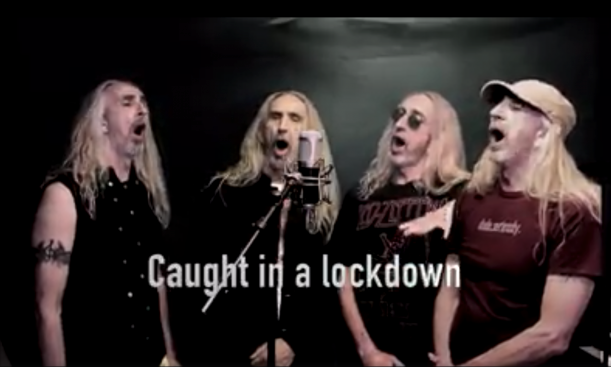 With a voice reminiscent of Queen frontman Freddie Mercury, Madison singer Adrian Grimes had a chance to put it to work all while spreading a bit of health education.

Grimes performed a parody of "Bohemian Rhapsody" that joins together the melody and voice of the original song with playful lyrics befitting the COVID-19 panic: "Is this a fever? Is this just allergies? Caught in a lockdown. No escape from the family."

His rendition of "Coronavirus Rhapsody" was posted March 21 on YouTube and has gone viral with 4.9 million views as of Wednesday afternoon.

Save for a few lyrical changes by Grimes, the song was written by Massachusetts-based comedian Dana Jay Bein, who said he finds inspiration in difficult times. Bein was laid off from his job at a day spa in Cambridge due to coronavirus closures the same week his lyrics found a mass audience.

Sitting in his underwear in quarantine and feeling uneasy about having a sore throat, Bein just started singing "Bohemian Rhapsody." There was no real reason for that song in particular. Bein isn't even a huge fan of Queen.

"I felt the scratch in my throat, sang the first couple of lines out loud and it was like lightening struck," said Bein, who pumped out the rest of the lyrics in fewer than 10 minutes.

Bein posted the lyrics he wrote on his Twitter account March 18, and has given permission to dozens of people to use his lyrics to record their own versions. Although people have pleaded for a version from him, Bein admits he isn't much of a singer himself.

Grimes, who is lead singer for the band The Solution, found the song through a Facebook post that someone sent him with a few of Bein's lines. A Google search for the full song led Grimes to Bein's website.

Without knowing the extent to which the lyrics were gaining a foothold, Grimes reached out to Bein and asked for permission to record using those lyrics. Nervous Bein would say no, he even included in the email a previous YouTube video to prove he had "the chops" to do it.

"I thought it was absolutely genius," Grimes said of the lyrics.

Now, a month after Grimes' video went live on YouTube, there are hundreds of videos available of people singing this particular rendition. Some, Grimes said, he likes better than his own, pointing specifically one done by the band Shelter Skelter.

That particular video on YouTube has about 9,700 views and was uploaded March 31. Grimes said he thinks his own version got so much traction because of the similarities in his voice to that of Mercury.

It took him between five and eight hours to record the song, which he posted thinking it would get a few views from fans of his band. Within the first few days, the video had attracted 300,000 views.

"I was just shocked," he said.

Grimes' iteration is one of at least 10 videos that have gotten more than a million hits, Bein said. Between all the different variations, Bein's lyrics have been heard in some form by more than 100 million people.

Bein made sure to credit the musicians and artists who went viral and helped him go viral.

"It's pretty humbling and at times tear-jerking to know that I spread joy and laughter all over the world in one of the darkest times of our history," he said.

Grimes changed a few words from Bein's script so that they'd feel more comfortable to sing. He changed the last line to "The curve could get much flatter / You know it's your responsibility" as a way to encourage people to take action and help prevent the spread of the virus.

"It's not just funny," he said. "There is actually a very important message in that."

There are plenty of other coronavirus parodies to enjoy, including Brent McCollough's "Stayin' Inside" parody of the Bee Gees' "Stayin' Alive" or "Virus....Baby" by the Singing Dentist, which is a parody of "Ice Ice Baby" by Vanilla Ice. Chris Mann, who's been dubbed the COVID-19's Weird Al, has several iterations, including "Hello" and "My Corona."