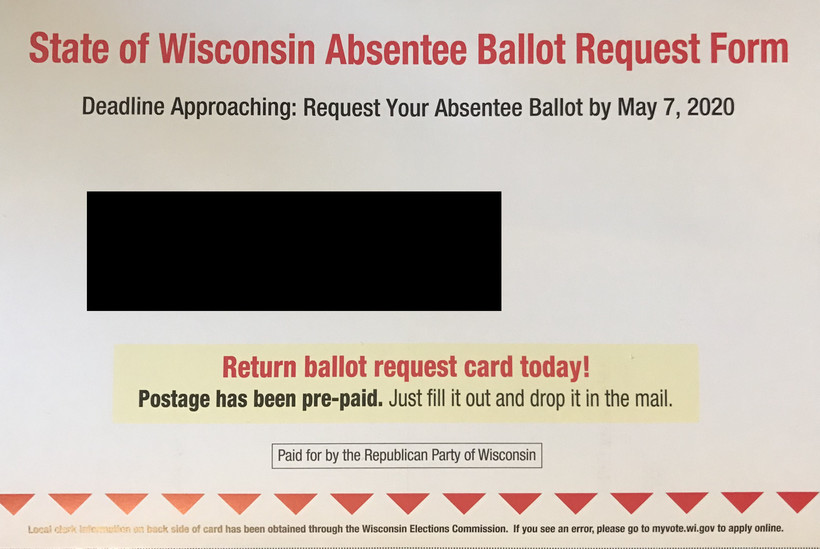 A mailer from the Republican Party of Wisconsin is confusing many voters who miss instructions about the photo ID requirement for requesting an absentee ballot. Rob Mentzer/WPR

A mailer from the Republican Party of Wisconsin claims voters can request an absentee ballot for the upcoming special election in Wisconsin's 7th Congressional District with a pre-paid postcard. But there’s a problem: Most voters returning the postcards aren't eligible to request ballots that way, and the burden is falling on local clerks to explain.

Kremer said she's received about 200 postcards in the last week. Except for a handful, they did not include a copy of the voter's photo ID — a requirement in Wisconsin for most absentee ballot requests. Exceptions are members of the military, permanent overseas residents and those who are "indefinitely confined."

"Nowhere on the postcard does it tell people that they have to submit a photo ID," Kremer said. That means it's up to clerks like her to contact those who dropped the card in the mail without attaching a copy of a driver's license or other valid ID. Kremer said her office is calling people who included a phone number, and sending letters to those who included only a mailing address on the postcard.

Wausau is the most populous city in the 7th Congressional District, which has a special election Tuesday, May 12. Republican state Sen. Tom Tiffany will face Democratic candidate Tricia Zunker, the Wausau School Board president and Ho-Chunk Supreme Court justice, in a closely watched contest in the rural district.

The deadline for requesting absentee ballots in the special election is Thursday — a fact that is advertised prominently on the GOP mailer. That means if voters wait until the deadline to submit their request but neglect to include a photo ID, there likely won't be time for clerks to explain the requirement.

Jefferson said the mailers, which were targeted to Republican mailing lists throughout the district, are similar to mailings that have gone out in prior elections, and that their instructions are clear.

"We've done a lot of different things to make sure people are able to vote (absentee) because that's our goal, is to get as many people moving toward absentee as possible, given the recent pandemic," Jefferson said. 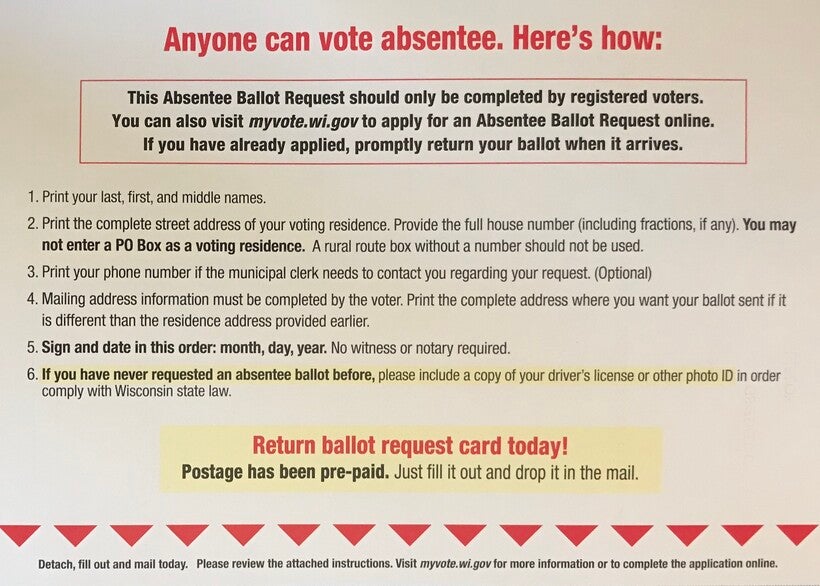 Instructions for requesting an absentee ballot include the photo ID requirement. But the language is not included on the prepaid postcard itself, and many voters are missing it. Rob Mentzer/WPR

The mailer does include six-step instructions on submitting an absentee ballot, and the photo ID requirement is included in those instructions. However, it's not on the postcard itself. And it's evident that many would-be absentee voters are missing the instructions.

"We have heard a lot of complaints about this mailer, and we understand that it's confusing for folks and it's not doing a great job highlighting the photo ID requirement," said Richard Rydecki, deputy administrator of the Wisconsin Elections Commission. "We did have a chance to review this before it went out, and we explicitly told them that they needed to make the photo ID requirement more prominent. I'm not sure how well they incorporated our suggestions."

A Wisconsin Elections Commission official said the April 30 discussion did not refer to the Republican mailer but to a different mailing from a different group, the Voter Participation Center.

It was not clear how widely either mailers were distributed. Clerks in Wausau and Merrill both said they had been receiving postcards from the Republican mailing.

Voters can visit myvote.wi.gov to request an absentee ballot online.