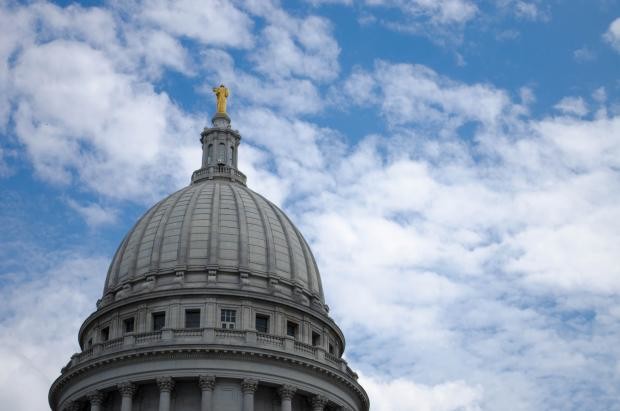 GOP lawmakers have rejected Gov. Scott Walker's plan to cut tuition at the University of Wisconsin System, but they’ll continue a tuition freeze for in-state students at system campuses.

Rep. John Nygren, R-Marinette, and Sen. Alberta Darling, R-River Hills, speak to reporters about the budget for the University of Wisconsin.Shawn Johnson/WPR

Walker proposed cutting tuition for in-state students by 5 percent in the second year of his budget. While the freeze is not quite as far as Walker wanted to go, it's still significant for the UW System, where tuition generates roughly one quarter of the system's entire budget, according to the Legislature’s nonpartisan budget office.

That's far more than the roughly 17 percent that's funded by state tax dollars, a percentage that's gone down as the UW System has seen its state funding cut in five of the past six state budgets.

Walker had also proposed spending an extra $35 million on the UW System to partially backfill the lost revenue from his tuition cut. Under the proposal that passed the Legislature’s budget committee Thursday, Republicans would use that money elsewhere in the budget.

Overall, the Republican budget would increase state funding on the UW System by $36 million over the next two years. It would be the first time Republicans have increased state funding for the system since they took control of state government in 2011.

"I’m pleased that today we are making an important investment in the UW System," said Sen. Sheila Harsdorf, R-River Hills.

Democrats disputed that, saying when you consider the amount of revenue the UW System would lose under two more years of a tuition freeze, the system would see less funding, not more.

The Legislature’s nonpartisan budget office said that if the UW System were allowed to increase tuition to keep pace with inflation for the next two years, it would generate $50 million. The GOP budget would not backfill that lost funding.

Most of the new state funding the system would receive would be tied to performance measures that would be set by the Board of Regents. The budget committee approved $31 million in performance funding, which is less than the $42 million Walker proposed.

The performance measures would have to emphasize student access, degree completion, contributions to the workforce and enhanced efficiency.

That’s far more general than the performance measures proposed by Walker, who wanted to tie state funding to everything from faculty instruction hours to the number of math and science graduates a campus produces.

"I would like to thank the members of the Joint Finance Committee for their support of the UW System," Cross said.

The plan approved by the finance committee is slightly less than the $42.5 million the UW Board of Regents requested last summer.

Another provision of the plan includes $3 million in state funding for a new Tommy G. Thompson Leadership Center on UW-Madison's campus.

At least $500,000 of that funding would have to pay for speaking engagements sponsored by the center at system campuses other than UW-Madison.

The list of speakers would need to be approved by a board that, in practice, would likely be run by Republican appointees.

The board would include the president of the Thompson Family Charitable Foundation as well as one member who worked under Thompson during his tenure as Wisconsin governor or U.S. Health and Human Services secretary. It would also include four members appointed by legislatives leaders, who are currently Republicans.

Sen. Jon Erpenbach, D-Middleton, said excluding Democrats from the board was not consistent with Thompson’s legacy.

"He was more of a bipartisan guy than a partisan guy," Erpenbach said. "To have a partisan makeup on a board on a school with his name on it I really believe doesn’t sit too well."

The UW funding plan passed the budget committee on a 12-4 party-line vote. Other provisions include:

The Republican co-chairs of the budget committee also pledged to support back-to-back 2 percent raises for UW System employees later in the budget process, although they did not vote on the raises Thursday. Those would mirror the raises Walker proposed for other state employees.

Editor’s Note: This story was last updated at 6:30 p.m. Thursday, May 25. For full disclosure, Wisconsin Public Radio is a service of the University of Wisconsin-Extension.