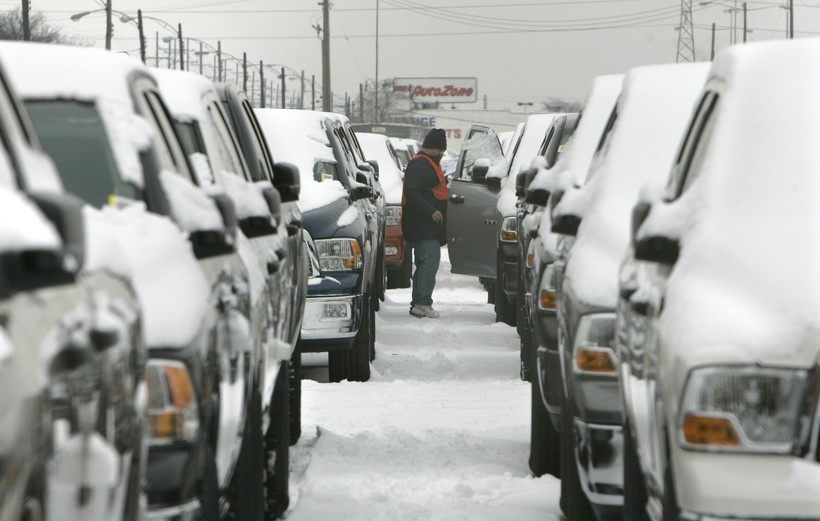 A lot employee looks over Dodge Ram trucks parked in a holding lot in Warren, Mich., on Thursday, Dec. 18, 2008. Chrysler is closing its 30 North American manufacturing plants until at least Jan. 19 due to slumping sales, Ford Motor Co. will shut down 10 North American assembly plants for an extra week in January and General Motors will temporarily close 20 factories across North America and make sweeping cuts to its vehicle production. Carlos Osorio/AP Photo

GM Shuttering Plants Due To Changing Habits Of Drivers
By Patty Murray
Share:

The company said the shuttering of the plants is partly due to the changing habits of drivers worldwide. And while work will stop, GM said the plants will not yet officially close.

Doug Fisher, head of Marquette University’s Center for Supply Chain Management, has also seen the evolution of car-ownership mentality. He said young people have basically lost interest in getting behind the wheel and revving up the engine.

"You have got this younger generation coming along that has a shift in mentality in their mobility preferences," Fisher said, noting the change may impact the oil industry, gas stations and car insurance companies as people opt to use ride-sharing services instead of buying and maintaining their own vehicles.

He said even vintage car owners should take notice.

Wisconsin has felt the pangs of drivers' changing habits before.

Most notably in Janesville, where GM once operated a bustling 4.8-million-square-foot facility that employed more than 7,000 people in its height. In 2008, the plant closed, producing its last SUV Dec. 23, 2008. GM moved the Janesville plant from "stand by" to "closed" in 2015. After years, the old GM property is now being revitalized. It is in the midst of being demolished.

Fisher said in light of changes in the market for automobiles, Wisconsin companies that supply auto parts are looking to re-tool.

"We are the machine shop to the world," he said, adding that means any mass closures such as GM's will have "a trickle-down effect as, in this case, General Motors gets out of some vehicles that are not the right fit for the marketplace."

Fisher said some Wisconsin die casting companies — a type of metal manufacturing — may be hurt by the closures. But he added that the new Foxconn plant in southeastern Wisconsin will be making components for electric and autonomous cars. He also said there are opportunities for suppliers to produce lighter graphite components rather than those made out of steel or aluminum.

"Pivot to make autonomous vehicles that do not have steering wheels but have to have sensors and guidance systems, artificial intelligence and machine learning, people have to learn how to build that stuff," he said.