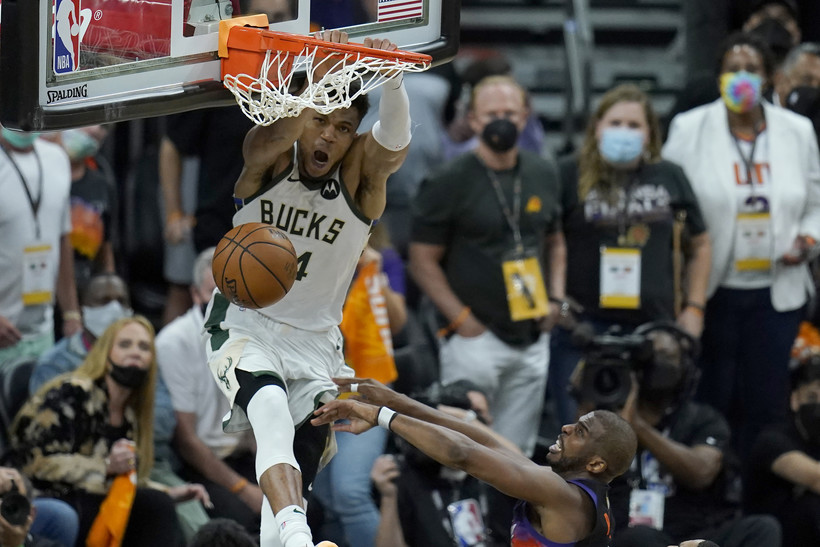 'Get The Job Done': A Game Away From A Title, Bucks Take Nothing For Granted

An Expanded Deer District Could Host Up To 65K Fans During Game 6
By Brady Carlson
Share:

If the Bucks are excited about the prospect of winning their first NBA Title in 50 years, they aren't showing it. Yet.

"It's got to be just another game," said forward P.J. Tucker during Monday's press availability. "If you put too much emphasis (on closing out the series), to me, you start to get out of your body. I think it’s another game. We’ve had that mentality every series, every game, next one up."

But, Tucker added the Bucks were playing the next game "knowing in the back of your mind what's at stake."

Milwaukee last won an NBA Championship in 1971, and hadn't been back to the finals since losing a seven-game series to the Boston Celtics in 1974.

They come into Tuesday night's game leading the Phoenix Suns three games to two, and they’re playing in front of a hometown crowd at Fiserv Forum.

In other words, hopes are sky-high that the Bucks will finally bring another NBA finals win to the Cream City.

Not that they haven't come close. In 2019, Mike Budenholzer's first year as head coach, the Bucks stormed through two postseason opponents before falling in six games to the Toronto Raptors.

Last year, after a pandemic-shortened regular season, the team lost to the Miami Heat in five games during the Eastern Conference semifinals.

Two-time MVP Giannis Antetokounmpo said Monday that when the Bucks lost the first two games of the NBA Finals, he recalled some of those past playoff series where the team had held an early lead, only to lose out in the end.

Whether or not they do, the Bucks expect massive crowds for Game 6. The team has expanded the outdoor Deer District to make enough room for 65,000 fans.

With ticket prices for Tuesday's game at record highs, the Bucks announced Monday they would raffle off a pair of tickets among those who take part in a pre-game COVID-19 vaccination clinic.