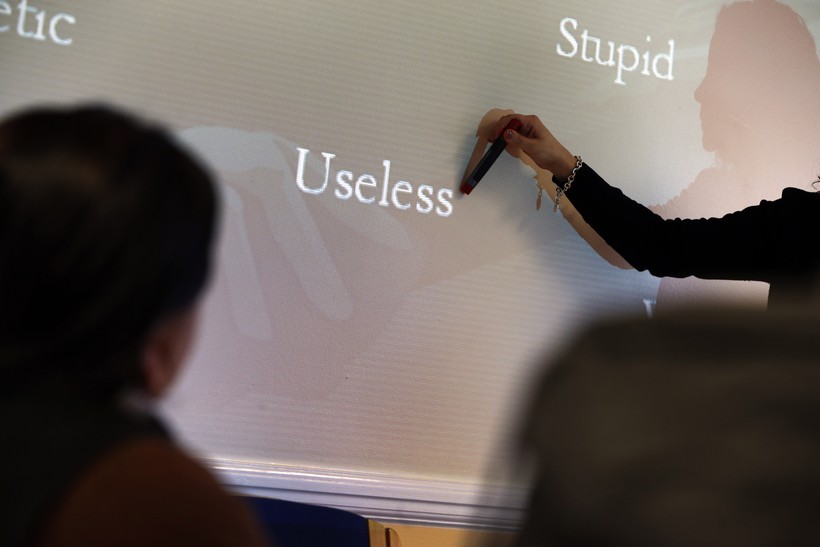 Term Is Derived From 1944 Film About A Man Who Preys On His Wife
By Elizabeth Dohms
Share:

Gaslighters appear perfectly normal at first glance, and for a while after that.

It's a slow drip of deceit, abuse and manipulation tactics that eventually make a gaslighter's victim question his or her own reality.

Stephanie Sarkis, a psychotherapist based in Tampa, Florida, and the author of "Gaslighting: Recognize Manipulative and Emotionally Abusive People — and Break Free," recently wrote about such behavior in the political sphere in an opinion piece for USA Today.

The behavior is the same, whether between courting couples, in a workplace or between a political leader and his or her constituents.

Gaslighting is manipulative behavior by a person who is trying to gain control and foster dependence. The term is derived from a 1934 play that became a 1944 movie, "Gaslight," in which a husband desperately tries to keep a secret from his wife by convincing her she's going insane.

Gaslighters will blatantly lie and then deny ever making those claims. Lying is an important part of gaslighting, because gaslighters will use lies to eclipse other bad behavior.

People exhibiting this type of behavior also pit their victim against other people, sometimes by making up stories that the gaslighter claims other people said.

"What happens is you try to get away from those people and you get closer to the gaslighter," Sarkis said, noting that gaslighters can be narcissistic and have a history of infidelity. They might tell other people their victim is crazy, or lie directly to victims by telling them other people think they're crazy.

Complicating things, the gaslighter can be perceived as a "pillar of the community" who is well-liked, which can make it difficult for the victim to convince others that the behavior is occurring, Sarkis said.

The need for attention often drives their actions in separating their victims from other close relationships.

"They will, in the beginning of the relationship, make you feel like you're the best thing ever," Sarkis said. "Eventually, you fall off the pedestal they put you on and there's no way to get back on the pedestal."

Whether gaslighters are aware of their behaviors depends on if there are other mental health disorders manifesting, such as narcissism or antisocial personality disorders, Sarkis said. In these cases, the gaslighters assume they're normal and everyone else is the problem, which makes them less likely to seek treatment.

If they're called out on their behavior, they might call the whistleblower "too sensitive" — a phrase gaslighters use often, Sarkis said.

Some gaslighters have carried over defense mechanisms established in childhood into adulthood, even though those behaviors are no longer needed. These cases tend to be easier to treat, Sarkis said, because the gaslighters know something is wrong and that they need treatment.

People who are most susceptible to being victims of gaslighting more often exhibit characteristics of ADHD, anxiety or depression, said Sarkis. Gaslighting is present in about 30 to 40 percent of the couples she treats, where such disorders are more commonly represented.

Gaslighting is as likely to be done by men as women, Sarkis said.

Trying to expose the gaslighter's behavior isn't necessarily a shoo-in to the victimizer admitting his or her faults. Even if their behavior is recorded, they'll likely say their message was misunderstood or even edited to portray them negatively, Sarkis said.

"It's really astounding to see the disconnect that they have between reality and what they want you to believe," she said.

Aside from its mental impacts, gaslighting can also cause the victim to become physically sick more often and notice more gastrointestinal issues related to increased stress. Self-esteem will suffer too, as the gaslighter tries to prevent the victim from leaving the relationship.

In cases where gaslighting is occurring, especially in the workplace where a coworker is taking credit for someone else's work or a boss is harassing an employee, Sarkis said it's important to document the times, dates and direct quotes. Notes should be taken somewhere besides a work device.

For those wanting to escape gaslighters, it's important to cut off all contact. If not, they may reach out with promises that things have changed or everything will be different, when in fact things often get worse if the victim returns.

If victims can't leave the situation, for example at work, Sarkis recommends ignoring the behavior.

"When gaslighters get bored with your response or you're not responding, they tend to move on to another victim," she said.