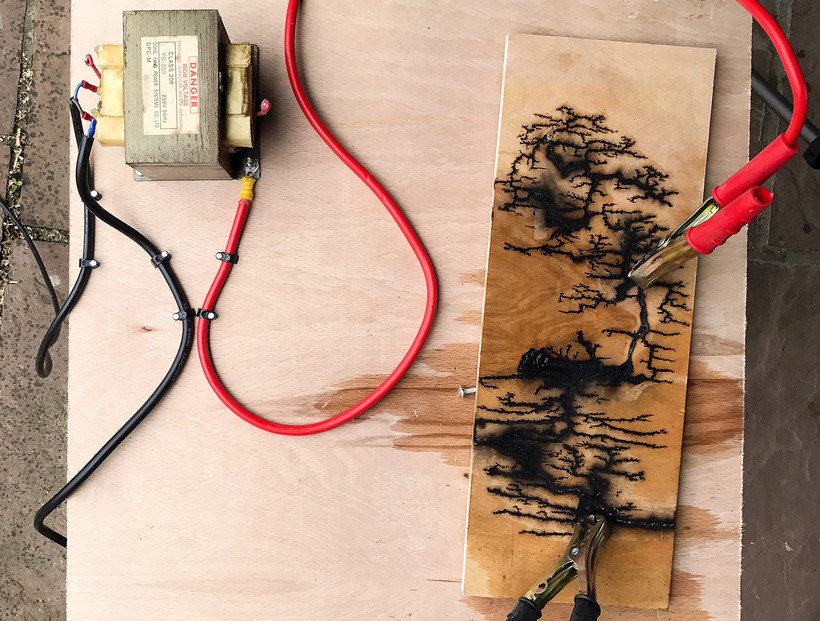 Fractal burning, a dangerous process that involves using jumper cables to run a high-voltage electric current from a disassembled microwave or car battery across a piece of wood, has led to the April 6, 2022 death of two people in Marathon County. Steven Vacher (CC BY-NC-ND 2.0)

Two people in Marathon County were electrocuted while they were engaging in a wood-art practice called "fractal burning." Their deaths are calling attention to the risks of the practice, which has spread on social media, and which experts say cannot be practiced safely by home woodworkers.

Tanya M. Rodriguez, 44, and James K. Carolfi, 52, were found dead in their rural Marathon County home on April 6 when firefighters responded to a house fire there. The Marathon County Sheriff's Office identified the deaths as "suspicious" and investigated the scene for signs of arson and homicide. Following a weekslong investigation by local authorities and the Wisconsin State Crime Laboratory, on Thursday Chief Deputy Chad Billeb said during a press conference that the two had died in their garage from electrocution by the electric current they were using to burn fractal patterns in wood. The house fire then started as a result of the same current.

"It's a very dangerous process," Billeb said, that involves using jumper cables to run a high-voltage electric current from a disassembled microwave across a piece of wood. "You can see the potential danger that's there, when you're working with something like the power supply to a microwave."

At least 33 people have died as a result of fractal burning, according to the American Association of Woodturners, which has sought to educate people about the extraordinarily high risks of the practice. Those who've died include new hobbyists and experienced woodworkers alike, and even in one case "an electrician with many years of experience working with electricity," according to the AAW's website.

A man in Michigan's Upper Peninsula died in July as a result of the practice. In Wisconsin, a Rock County man died in 2020 after he got interested in fractal burning because he had watched videos about it on social media.

There are hundreds of such videos on YouTube, TikTok and other video-sharing sites. They include videos of people who used home microwaves as a power source and others who use a car battery. Some offer cursory safety warnings; some do not.

The intricate patterns burned into the wood as the electric current passes over it can resemble a bolt of lighting or the branches of a tree. They're sometimes called "Lichtenberg figures," and they're observed in other electric discharges, including the scars left on people who are struck by lightning.

Phil McDonald, executive director of the AAW, said the organization adopted a strong recommendation against fractal burning beginning in 2017 after seeing a "proliferation" of social media tutorials instructing people on how to use "extremely high-voltage transformers to create their own home-based fractal burning systems."

"I believe that's probably been the largest contributing source to the individuals who are being injured and dying from this," McDonald said. "The equipment can't be made safely, and the real issue here is that there are not enough safeguards once those home-based systems are built to ensure that they can be operated safely."