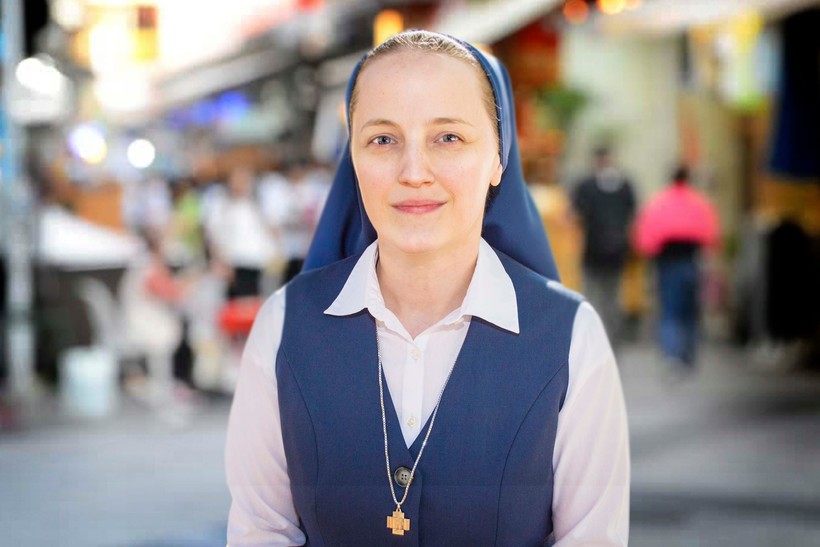 On Sister Theresa Aletheia Noble's desk at the Daughters of St. Paul Pauline Publishing House in Boston is a small skull. She uses it to meditate on death.

This nun, who's the daughter of a theologian, left the church and her Catholic faith during her teenage and early adult years and focused on other interests including punk rock music. She now leads the Memento Mori project that encourages others to actively think about their own end.

"Some people can have some pretty strong reactions to my ministry, but I think that it's important for us to remember that we die because it gives us the proper context to our lives," she said.

In a conversation on "The Morning Show" with Lee Rayburn, Noble talks about her interest in meditating on death and gives advice for how to start.

Lee Rayburn: We don't like to think about death. Why is that? Are we using some sort of coping mechanism to look past what is a guarantee for all of us?

Sister Theresa Aletheia Noble: Yeah, I think if we're all honest with ourselves, we do a lot to deny the reality of death.

At different ages, that's a different reality. I remember when I was a teenager, I didn't think of death at all. And I almost didn't even think that I could die in many ways. And you see that in some teenage behavior.

But I think all of us to some extent want to deny the fact that we're going to die. It's not a comfortable thought because it can be really jarring in our lives.

But I began meditating on my death every single day in 2017. I found that it does bring up uncomfortable feelings, but it also has really helped me to live my life in a more focused way and for me and my religious life to be more focused on what is most important, which is God.

LR: How did you learn about Memento Mori?

TAN: Fr. James Alberione was an Italian priest and founder of our religious organization. I remember reading a biography of him that described how he would keep a ceramic skull on his desk and meditate on his death every day.

I used to be really into punk rock, so I remember thinking to myself, "That's so punk rock — I'm going to do that at some point."

I joined the convent and I kind of forgot about it, but I was reminded of it a few years ago. And I think it was an inspiration, because I needed something in my life to help me to move forward.

That's what I've found Memento Mori has done for me. It's really just helped me to become more focused and to really think about my life in a realistic way.

Memento Mori was a phrase very popular during Medieval times — you'll see it on graves and in lots of European churches. But the tradition of remembering death is something that I discovered stretches back to the beginning of salvation history, which is thousands of years ago for us.

This is just something human. We all die, and it helps to think about it.

LR: Sister, if you would, take us through your meditation practice.

TAN: So for me, I looked within the Christian tradition and in scripture and I also looked in the lives of the Saints.

Whenever I would be in Mass, I would hear phrases from scripture that were just like, "Wow, that is an exhortation to remember my death."

For instance, the Book of Sirach says, "In all you do, remember the end of your life and you will never sin."

The Psalms teach us to count our days, that we may gain a wise heart.

I really think that sometimes people think of this practice as something that's very complex, but it's really not. It's actually just the conscious bringing to mind the reality of your death every single day for what could be a few moments to a time of prayer.

I've looked to St. Ignatius of Loyola, who encouraged people to think of themselves on their deathbed whenever they're making a big decision in life.

That's actually something that I do fairly regularly. I just think, "If I were on my deathbed, what would I want to decide right now?" And it actually has helped bring a lot of clarity to a lot of my life decisions.

LR: So, what's your mood when you're done meditating on your own death?

TAN: When I first started, my mood was pretty anxious. It brought up a lot of feelings that I think I had repressed and it made me face uncomfortable things — fear and anxiety and doubt.

Now that I'm in the practice of it, it still brings up those uncomfortable feelings. But overall, I feel more filled with a hope at the end of it.