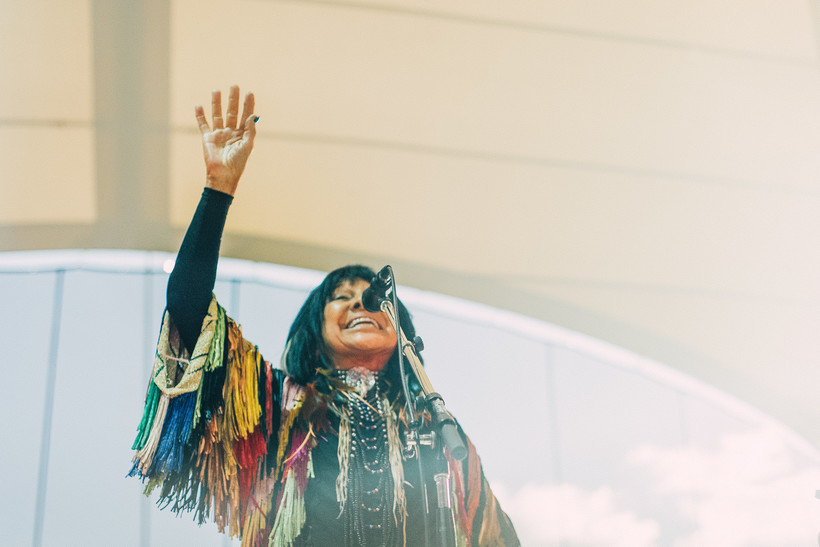 Folk Music From Our Neighbors To The North

Canadian Artists Have Been A Rich Source For Folk Music Over The Years
By Dan Robinson
Share:

Buffy Sainte-Marie, Gordon Lightfoot, Joni Mitchell, Neil Young, Leonard Cohen, Stan Rogers — the list reads like a folk music hall of fame. Besides folk music, what do all these people have in common? Well, they’re all from Canada, eh!

Along with others, like Bruce Cockburn, Kate and Anna McGarrigle, and Ferron, our neighbors from the north have been sharing their folk music riches with us here in the United States for years. Now seems like a good time to say "thank you," with Canada Day, the country’s national holiday, coming up on July 1.

A lot of these musicians set their musical roots in the 60s, 70s and 80s, but still today, those of us in Wisconsin are the beneficiaries of Canadian folk music. Each year, Canada’s national music awards — the Juno Awards — recognize excellence in the traditional roots music category, and three of the five award winners have been played multiple times on "Simply Folk": The Small Glories, Natalie MacMaster and April Verch, who also did an in-studio interview and performance for "Simply Folk" back in 2016.

The Small Glories, the duo of Cara Luft and JD Edwards, are from Winnepeg, and "Simply Folk" has played a number of cuts from their Juno-nominated album, "Assiniboine And The Red." Here’s one of the recording’s songs, "Oh My Love."

In 2019, the traditional roots music category nominees included artists featured on "Simply Folk," like David Francey, Pharis and Jason Romero, and the Wailin’ Jennys, who received a nod for their album "Fifteen." From that album, here’s the group’s cover of the Paul Simon tune, "Loves Me Like A Rock."

The Juno award for indigenous musicians has gone under different names over the years, but in 2016, Buffy Sainte-Marie was nominated for aboriginal album of the year for her recording, "Power in the Blood." Sainte-Marie was born on a Piapot Cree First Nation reserve located within the borders of Canada’s Saskatchewan Province. Abandoned as an infant, she was adopted by Albert and Winifred Sainte-Marie, who were of Mi’kmaq descent and lived in Wakefield, Mass. (Just a side note... Saint-Marie was the first indigenous person to win an Oscar, winning in 1983 as co-writer for the song, "Up Where We Belong," from the film, "An Officer and a Gentleman.")

Here’s a track from her "Power in the Blood" album, "The Uranium War."

The coronavirus may have closed the U.S.-Canada border to travelers, but music continues to cross international boundaries and bring us all a little bit closer. So, who will be the next folk export from the north?