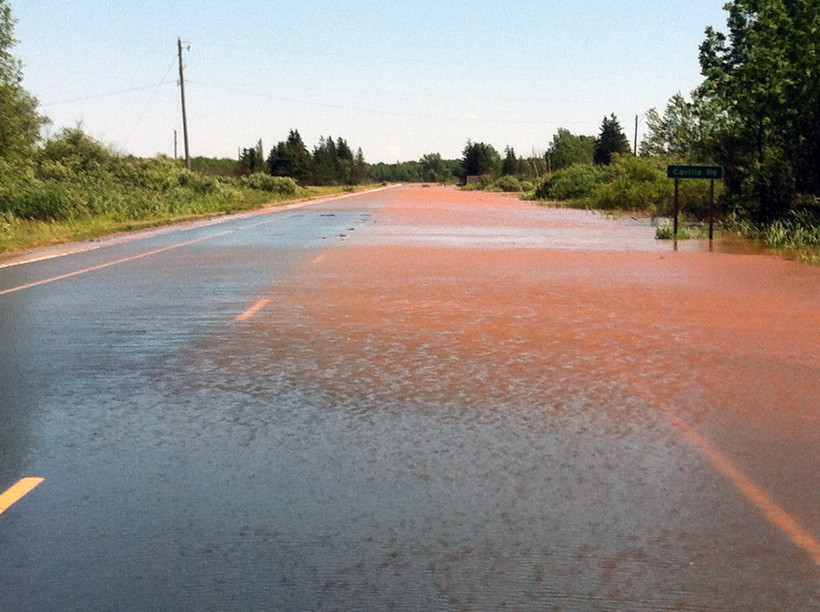 Flooding on U.S. Highway 2 near Odanah.

Waters Still Rising In Spots, No Word On Extent Of Damage
By Danielle Kaeding and Rich Kremer
Share:

Law enforcement and road crews in northern Wisconsin are still trying to get a handle the damage from Monday evening’s storm.

"We’re still waiting for water to recede in certain areas, so some of the damage we won’t be able to assess until the water is gone. So, it’s still all a moving target," said Maas.

"This amount of rain in that period of time is unheard of in many years," he said. "In my career, the only thing I can compare it to was when, in 1989, when the Orienta Dam washed out in the Iron River."

An Illinois man died there Tuesday after his car became submerged in a ditch on the side of the road. Bayfield County Highway Supervisor Tom Toepfer said crews have pinpointed problem roads.

"We’re working on them. I think that we’re going to have the roads open by the weekend except this Highway 63, which is a state issue," said Toepfer.

Ashland County Sheriff Mick Brennan said east-to-west access on U.S. Highway 2 is cut off because the Bad River has flowed over its banks onto the highway.

"One of my deputies this morning had to take the big detour to come around so we can get law enforcement on the east side of the closure on U.S. 2," he said.

Those driving from Ironwood or Hurley face a 2 ½-hour detour to get back on the main stretch. John Unger of Jacksonville, Florida said he was on his way back from Houghton, Michigan.

"We were taking a forest road and all of sudden the road’s closed. So we had to turn back and we had to go another way and turn back" he said. "Then we found a gentlemen at an old post office who was giving a lot of people a lot of directions."

According to WISDOT the following state highways are closed:

WISDOT Spokeswoman Maas says the state has been in contact with federal emergency management personnel in hopes of getting help with recovery.

"With the governor declaring a state of emergency in the affected counties that helps us start the process to, hopefully, receive emergency relief funding but that’s a process and we’ve started those conversations," said Maas.