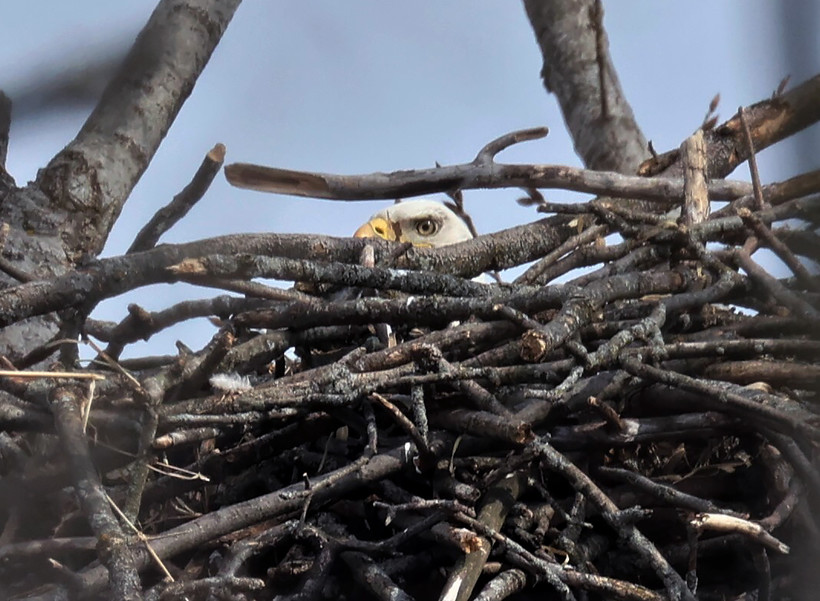 A bald eagle tends to eggs in the nest found by Beth Berger Martin in a Milwaukee County park. Photo courtesy of Ken Martin

For the first time in decades, bald eagles begin to take up residence in Milwaukee County

The once-endangered species is now nesting in all 72 Wisconsin counties
By Diane Bezucha
Share:

You could say it was her eagle eye, but it was more like her eagle brain. Beth Berger Martin, a volunteer with Madison Audubon’s Bald Eagle Nest Watch program, was trying to think like an eagle.

The Geneva resident routinely monitors eagle nests throughout Walworth, Racine and Kenosha counties. After reports of possible nest sightings in a Milwaukee County park, Berger Martin was one of several people watching the area for eagle activity earlier this year.

During her weekly wanderings, she had spotted smaller, partially constructed nests and figured an active nest had to be close.

"I looked at a map and I thought, 'If I were an eagle, where would I think would be a good place for me to build a nest?' And within two minutes of deciding, 'This is where I'd go,' turning onto the road, I found it," Berger Martin said. "I was extremely excited."

Perched high atop a tree in a massive nest was a pair of bald eagles — the first known pair to take up residence in Milwaukee County in decades.

With the discovery of this nest, the Wisconsin Department of Natural Resources, Madison Audubon and Milwaukee County Parks Department jointly announced that bald eagles are officially nesting in all 72 Wisconsin counties — a remarkable comeback considering they were on the brink of extinction just 50 years ago.

"For the eagles to be able to come back from such a bad state of population decline into now being in every county in Wisconsin with an active nest, it's really remarkable," said Brenna Marsicek, director of communications and outreach for the Madison Audubon and co-organizer of their nest watch program. "(It’s) something that bald eagle lovers and nature lovers in general have been hoping for for so long."

After the discovery of nests in Kenosha County in 2017 and Walworth County in 2018, Milwaukee County was the last holdout.

As Wisconsin’s most densely populated area, Milwaukee County is not exactly an easy place for eagles to find a suitable nesting site. They need tall trees to support their large nests, a steady food supply and ideally a source of open water. 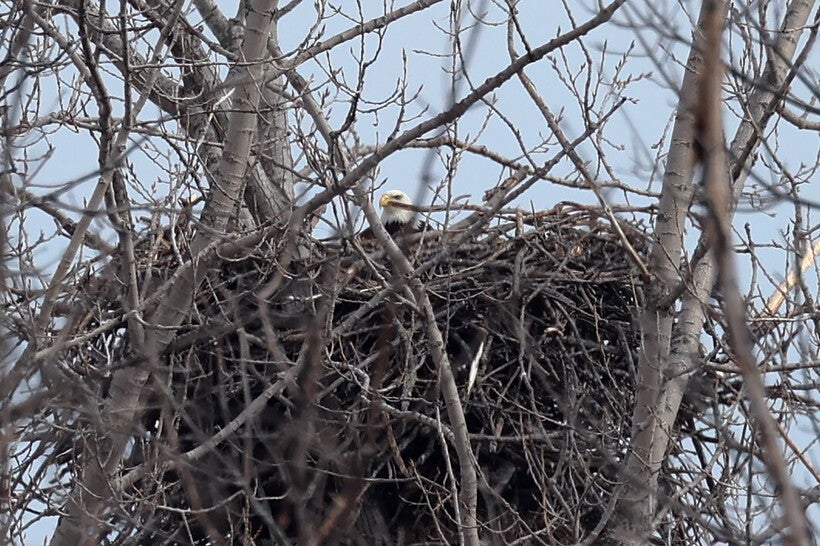 Still, advocates said it was only a matter of time.

According to Brian Russart, natural areas supervisor for Milwaukee County Parks, the number of bald eagle sightings in the county has increased significantly over the past five years. They had to build nests sometime, he said.

The nest Berger Martin spotted is on park land in the southern part of the county. Russart said it was actually built last year, but this is the first time eagles are using it for egg tending, indicated by their round-the-clock presence in the nest.

And Russart said it’s now one of three known nests in the county. A second nest was constructed this year on public land but is not yet occupied. And a third nest, on private land in the eastern part of the county, is housing a second pair of bald eagle parents-to-be.

"It really showcases how urban areas can have a great deal of ecological diversity to them," Russart said. "Our natural areas aren't black holes (where) ecology can’t exist."

Over the past 10 years, his team has documented nearly 2,000 native species of plants, wildlife and fungi within the urban park system.

"Eagles are just one of, at this point, 22 different species of birds breeding in the park system," Russart said. "Definitely the cherry on top, though."

According to Sharon Fandel, southeast field ecologist with the DNR, the 1880s were likely the last time eagles were nesting throughout the state.

When the bald eagle was adopted as the country’s national bird in 1782, there were an estimated 100,000 nesting pairs. At one point, they were so numerous and frequently hunted that the government even offered a bounty for shooting them in Alaska.

Overhunting quickly decimated the population and in 1940, the federal government enacted the Bald and Golden Eagle Protection Act, making it illegal to hunt eagles or harm their nests or eggs. But by then, eagles faced a new threat.

Widespread use of the pesticide DDT after World War II damaged the shells of many bird species and further decimated the eagle population. By 1963, there were only 417 nesting pairs in the country and the bald eagle was in danger of extinction.

But decades of recovery efforts, including the banning of DDT in 1972 and protections under the Endangered Species Act, have helped the eagle make a comeback. In 2007, the bald eagle was removed from the list of threatened and endangered species. Since then, their population in the lower 48 states has quadrupled to more than 71,000 breeding pairs.

And Wisconsin sits within the lower 48’s most populous region — the Mississippi Flyway.

"We’ve come a long, long way," Fandel said. "It really punctuates the storyline in terms of a great conservation success story for all of us."

While eagle populations in northern Wisconsin have more or less stabilized, the numbers are still growing in the southern half of the state, as the new nests would indicate.

Fandel said eagles generally return to the same nest, especially if they were successful hatching and raising chicks in the previous year. So she expects to see continued growth in southern Wisconsin’s bald eagle population.

"We have yet to find out where the endline is," Fandel said.

Generally the DNR conducts an eagle population survey each spring. Staff use low-altitude aircraft to confirm the presence of actively nesting adults. But not all nests are visible or accessible from aircraft. That’s why they also rely on programs like Madison Audubon’s Bald Eagle Nest Watch.

During eagle nesting season, roughly February through June, volunteer "nest watchers" monitor active nests for an hour a week and report their findings to Madison Audubon and the DNR.

"The DNR does one flyover a year. They get a little snapshot of what's going on at the nest. We provide them with more of a complete story of what's going on for the season for that nest," said Drew Cashman, a volunteer and co-organizer of the program.

Cashman, who helped start the program, said he caught "the eagle bug" while living in Colorado and doing similar work. In 2018, after moving to Wisconsin, he approached Madison Audubon and asked if they would be interested in starting a bald eagle nest watch program.

They started with about a dozen nests in Dane County. Now, in their fifth season, they have grown to 300 volunteers monitoring 136 nests in 28 counties.

Volunteers are trained to recognize eagle behavior and body language. Co-organizer Marsicek said over their months of observation, volunteers observe eagles building their nest, hunkering down and rolling eggs to keep them warm, then sitting higher to accommodate new hatchlings. Eventually, they start to see little heads peeking over the edge of the nest.

"That is such a thrill to be able to see these chicks that you've been waiting and watching for every week for how many months," Marsicek said. "They'll start flapping wings and practicing flying and then eventually they'll take their first flight and the volunteers get to see all of that process throughout the season."

Because they are based in Madison, Marsicek said most of their monitoring happens in southern Wisconsin. But last year they partnered with 1000 Islands Environmental Center to start a nest watch program in the Fox Valley and this year they have expanded to central Wisconsin. Eventually, they want to bring the program to all of Wisconsin.

Berger Martin is one of their most active volunteers.

"She has the eagle eye for locating new nests," Cashman said.

When Berger Martin found the nest in southern Milwaukee County, one of the first people she called was her husband Ken, a fellow eagle enthusiast.

Together they sat in the car squinting through binoculars and a telephoto lens, watching the pair of birds soar on the thermals above the treetops. And they got to witness a pretty thrilling moment.

"(The female) just started to drop very quickly and went into the nest. And that was it. She must have been ready to lay an egg," Berger Martin said. "One bird is on the nest continuously since that moment."

But as much as Madison Audubon and the DNR rely on observations from volunteers like Berger Martin, she said nest watchers often depend on private homeowners to provide access to nests and keep their locations confidential for the protection of the eagles.

"We couldn't do it if we didn't have the support of homeowners who got us off the road so that we didn't have to look suspicious with a long lens hanging out of a window and let us come and go at will at their properties so that we can observe these nests and do what we do," Berger Martin said. "When you think about it, it's just a really beautiful chain of trust."